During the cool fall months, my house is surrounded on all sides by "pumpkin farms" (a polite term for "cash cows").

Parents, admit it: You've taken your kids to one. The public pools were drained on Labor Day, yet you still seek outdoor activities. Especially those of you who live in cold weather climates and know that four months of miserable temperatures await you. So, you dress your children in hideous orange and brown attire, load up the minivan and head to that wide open field, which, for 320 days a year, is just that: a wide open field.

But for six weeks in autumn, the field's owners magically transform empty space into a seasonal paradise brimming with activities that demand every bill that emerged from the ATM machine you wisely visited shortly after leaving the driveway. Open your wallet and find pumpkins, drink cider, console your kids after they temporarily become lost in a corn maze, console them again after they emerge from a haunted house, and, finally, pick gourds!

Excuse me. Pick gourds? I'd rather bite into a taffy apple after undergoing a double root canal.

I've never understood the attractiveness of the gourd. Yes, it's a fruit, but only a few varieties are edible. And do you know anybody who has actually cooked one?

"Yum, Grandma, is that gourd I smell?"

If I'm going to stoop down and hear my back whine in protest while I pick fruit off the ground, I want that fruit to be in a pie, a smoothie or my belly within minutes. It's the only reason I once said yes to raspberry picking, an activity I quickly discovered is synonymous with bee stings.

Yes, the gourd makes it to the dinner table but only as a centerpiece ... and a strange looking one at that. Most gourds I've seen are covered in warts; they resemble the nose of every Halloween witch mask you've encountered in costume shops (and at least one of your relatives).

Even children who squeal in delight at the prospect of gourd picking eventually realize the gourd's worthlessness. They emerge from the gourd patch, gourd in hand, with expressions that say, "Now what?" The gourds ultimately turn into weapons during the car ride home.

"Ever eaten a gourd?"

In a curious effort to determine why anyone would pay money for a gourd, at a pumpkin farm or anywhere for that matter, I searched "gourds" on Pinterest, a website that consistently reminds me how truly uncreative I am. In minutes I discovered gourds can be transformed into bowls, vases, birdhouses, maracas and Christmas ornaments. I even saw an entire "family" carved from gourds, although it was hard to tell the mother from the father due to the absence of anatomical gourds. I did make out a gourd dog and gourd cat. 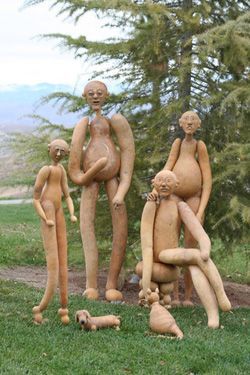 But that's my point; the pumpkin farm gourd, in and of itself, is useless. Only when cut, polished, painted or shellacked does it become something practical, even if it will eventually wind up in a yard sale. Which is why I'm imploring all pumpkin farm owners to GIVE gourds away, as opposed to charging cash strapped parents for them. Surely you are making enough money off other farm "activities." How else can you explain why your businesses can thrive year after year despite being open for only eight weeks? To be fair, some pumpkin farm owners near my house continue working long past Halloween, quickly removing all the pumpkins and trucking in Christmas trees and other yuletide decorations. Don't get me started on what a reindeer carved from birch bark cost me a few years ago.

Until I have grandchildren I believe my days of pumpkin farm visits are behind me, meaning I will be gourd-less for a good five to 10 years. But, as I dragged the Halloween decorations up from my basement recently, I discovered several gourds at the bottom of a large bin. I pondered whether to toss them in the yard next to the scarecrow and hay bales that greet trick-or-treaters as they approach my front door.

Instead, I plan to deposit them into the treat bags of a few lucky children. Their parents will thank me for the cost savings.