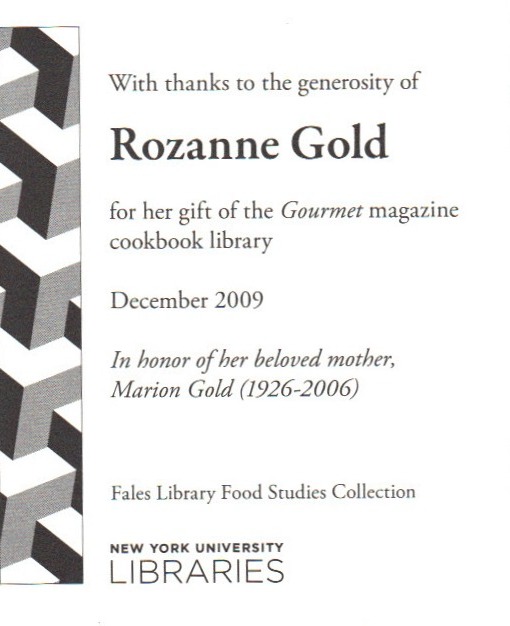 You may recall that when Gourmet Magazine was abruptly shut down in December 2009 there were 3,500 cookbooks on their library shelves that would have great value as a single collection -- but they were on the verge of being broken up or, worse, sold off by Conde Nast for just $4 a book. With some well-timed phone calls, a bit of luck, and surprise approval from my family, I shelled out $14,000 to buy them all.

But not for myself. Instead, I donated them, down to the very last recipe, to New York University in honor of my Hungarian mother, a vivacious cook who was more Zsa Zsa than Julia.

I've just discovered that I'd purchased not 3,500, but in fact 6,317 titles. For a moment, I fantasized that the books had bred amongst themselves and that these bonus babies represented a new form of "fusion cuisine." The more prosaic answer came from Marvin J. Taylor, director of Fales Library and Special Collections at NYU. "It turns out that there were boxes and boxes of smaller pamphlets that pushed the numbers up."

What's more important than the numbers is that almost two years to the day the collection is now available for research and for posterity. Financed by a grant from Les Dames d' Escoffier, "We have just completed the cataloging of the Gourmet library," reports Taylor. For all of us in the world of food, that's exciting news. The collection is now ready for use by historians who live in research libraries and for the rest of us who'd just as soon troll through a cookbook as read a novel.

To that point, I'm eager to read The Cookbook Collector by Allegra Goodman. It is a novel not about cookbook collecting, but whose premise serves as a metaphor for the substitutions we make in our lives when we can't find what we're looking for, i.e. reading cookbooks instead of actually cooking, collecting instead of living. My mother wisely noted that I enjoyed puttering in the kitchen rather than working on my master's degree in psychology. So that I wouldn't cook instead of work, she encouraged me to become a professional chef at a time when women were anathema in the kitchen. I'm proud that the woman who inspired and nurtured me is immortalized by having her nameplate in each book in the Gourmet collection.

Gourmet magazine made the world of food possible for many of us: We ate and drank its dreams. Its images and words shaped our aspirations, made us thirsty, piqued our curiosity, cajoled us to travel, and steered us to ancient hungers. We grew inquisitive as we sat at its table and became sophisticated at its knee. Few institutions can help us journey inside ourselves at the same time as we journey to the four corners of the world. The Gourmet library is so important because it means something unique to each of us.

Gourmet was where I had my first job interview after I graduated from college. I lived downstairs from their elusive photographer Luis Lemus. I didn't get the job, but years later I wrote for them, and was eventually written about and featured on one of their covers. No doubt, each of you reading this has your own special story -- even Nora Ephron, who said, "Every time I get married, I start buying Gourmet."

According to Taylor, the Gourmet library, consisting largely of volumes published within the past 30 years, was discerningly put together. "It really represents what the editors saw as the best of the best," he said. "It is fascinating because you can see the various trends Gourmet covered. There are shelves of Cajun books and many Mediterranean books. And there's a very large Asian selection."

NYU reportedly has the largest assemblage of cookbooks and other culinary miscellany in the country and I am happy that the collection will be available to chefs and food professionals forever and will keep Gourmet in everyone's heart.