Gourmet Editor Ruth Reichl was upbeat about many things when she spoke to Columbia journalism students last week, even the economic downturn. "The silver lining in this recession is that it is making people cook more," she said. Reichl, the latest Delacorte Lecture speaker, has reasons to be cheerful. As reported in the New York Times Monday, circulation at cooking magazines is going up as the stock market goes down. She advised journalism students to specialize, and shared tasty anecdotes from her 30-year career. 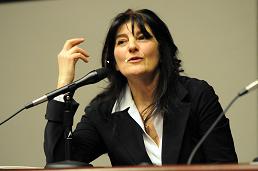 Ruth Reichl, the upbeat and gracious editor-in-chief of Gourmet magazine, spoke about feeling fortunate when she addressed Columbia journalism students at the February 26th Delacorte lecture. In fact, the former food critic used those words -- that she felt fortunate -- about all of the following circumstances: that Gourmet isn't hierarchical, like other Condé Nast magazines; that when she re-envisioned the magazine ten years ago, the staff was also "very, very into it"; that she loves her creative director; that she had a passion for food at a time that other people didn't (the 1970s); and that, at her house upstate, she's surrounded by farmers who provide seasonal, local produce.

Even the economic downturn got a positive spin. "The silver lining in this recession is that it's making people cook more," she said. "The great glory of the restaurant is sort of fading, and people want to cook at home -- thinking about saving more money in the kitchen," which also helps reduce waste. Reichl avoided giving advice to the room full of anxious, soon-to-be-unemployed graduate students. She did say that now is not the time to enter the field of food writing, because it's so chic. "Find a niche that is not already full," Reichl advised, "and become an expert. Specialization, I think, is really important -- more than ever."

Her parting note was political, although she said it was unfortunate that it had to be. Reichl abhors the subsidies that make fast food affordable and healthy, fresh food elite. It comes down to tax policy, she said. Her solution: a Cabinet-level Secretary of Food. I nominate Ruth Reichl. 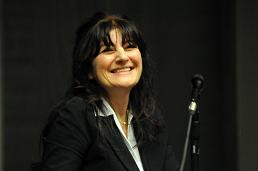 "This is Our Moment," says Ruth Reichl of Gourmet.

Ruth Reichl made a name for herself by being an iconoclast. First she shook up the food section at the Los Angeles Times by championing local ethnic cuisine. Then to great the dismay of predecessor Bryan Miller, she "destroyed the system [sic] of The New York Times by "giving two and three stars to noodle shops in SoHo." By the time she became the editor of Gourmet, Reichl had become even more effective. A reader credited Reichl with "destroying the best magazine in America," after only a single issue. So it was unsurprising when Reichl told the audience at the Delacorte Lecture Series that she was excited by the opportunities presented by the economic downfall and implosion of the media world. "This is our moment," Reichl said.

Reichl admitted that the food and magazine world face tremendous challenges. She said that online reviews by restaurant patrons had made professional critics obsolete. She recently told her staff that Conde Nast was no longer reimbursing tuition expenses, and she has had to cut positions. Reichl has been asked many times to justify the resources given to food writers versus writers covering other "more serious" beats.

And she seemed somewhat chagrined by having to twitter several times a day. Reichl has taken risks with Gourmet before. The magazine published David Foster Wallace's famous "Consider the Lobster" article that examined the bioethics of boiling live crustaceans. But more often than not, her risks have paid off. And Reichl offered candid advice about the articles and decisions that can be the most rewarding. "It's always the ones you worry about that are the ones worth doing." 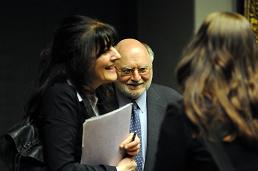 Ruth Reichl has come a long way from the days she used to start her car with a screwdriver and take her friends shopping at thrift stores to buy the "finery" they would wear to the restaurant she was reviewing that evening.

Now she divides her day between writing "cookie copy" (yes, copy about cookies), discussing budget cuts with her publisher, and twittering to drive web traffic towards gourmet.com. The editor of Condé Nast's Gourmet, "the magazine of good living," has a somewhat unorthodox working pattern, which reflects the unconventional approach she taken to her 30-year career in food journalism. Reichl told the room of J School students that she originally refused the offers of her both her job as editor of the Los Angeles Times food section and as editor-in-chief of Gourmet, a notion that must be incomprehensible to those of us who are just dreaming of a paid internship.

But Reichl explained that she never really set out to write about food for food's sake; rather about what food says about the people that eat it. "It can be a really profound way of covering the community," she said. Describing her non-interview with her future boss at Condé Nast, Reichl said, "I started talking about farming, sustainability, trans fats, fish farming, depletion of ocean stocks. I said that all of this really belonged in an epicurean magazine." This to a man who was looking for, in Reichl's words, "an elegant dinner party."

But Reichl kept getting the jobs, and she has succeeded in turning Gourmet into much more than a stylish recipe book in the ten years she has been in charge. Her advice to a generation of fresh-faced-future-food-critics? Specialize. "Specialization is really important, more than ever before," she said. "I was lucky. Now everybody wants to be a food critic, but when I started out, no one did. Don't go into a completely crowded field." Well, with all the layoffs we keep hearing about, the field is starting to look distinctly spacious. 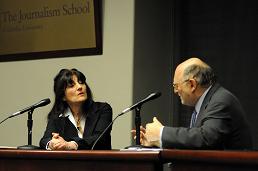 Reichl has changed the way that many people think about food writing -- for the better. Her willingness to address the changing nature of the industry was refreshing, especially considering the stream of willfully obtuse don't-worry monologues that have been streaming into the journalism school recently. Instead, she spoke openly about the use of "brand extensions" and the necessity of adapting to the changing realities of a struggling industry, be it concessions to television and Twitter or the inevitability of lay-offs and the need for the "voracious maw" of the Internet.

As a chef-cum-journalist myself, I have a lot of respect for the way that Reichl has lobbied for a greater understanding of a food culture through her writing for the L.A. Times, the New York Times, and Gourmet. In cooking, at least the best kind of cooking, chefs become aware of food systems, including agriculture, shipping and packaging, commerce, transportation, aesthetics and economics: all the elements that go into the production and consumption of our most basic need.

Reichl is a good writer because she thinks in such holistic terms; I'd like to think that's because of her experience in the culinary world. It also seems like it makes her a good editor. If what she says is true, she is running one of the least "hierarchical" Conde Nast publications, and it seems to be working. The magazine has won three National Magazine Awards under her stewardship and both its circulation and advertising have increased.

If Ruth Reichl is to be believed, then the next big food fad is going to be Indian. "There's a large influx of Indians," Reichl said, addressing journalism students at Columbia University, "and combined with Slumdog's win," she believes the food is going to get "bigger."

For now, however, she thinks Korean food is America's next new cuisine. This month's magazine features "Mind, Body and Seoul," a lush picture- spread inspired by Hong Kong filmmaker Wong Kar Wai's In The Mood for Love. The pictures, mostly set against a red backdrop, however, have set off howls of protest among Korean readers -- as red denotes death in the community. As the recession barrels through the economy, Reichl is doubly sensitive to her reader's angst, has has been dashing off emails of apology to them.

Between editing copy about cookies and tastings of squid soup, Reichl now twitters in an effort to divert traffic to the Gourmet website as ad pages in the magazine drop. The only upside to the downturn, notes the former New York Times food critic, is that more people are now staying home to cook. "This is where we become relevant," she noted, describing Gourmet's efforts at helping people learn how to cook and enjoy making "four meals with two chickens." Reichl also spoke of David Foster Wallace's 8000 word treatise on lobsters -- saying she didn't want it to be a PETA piece, but sided with Wallace, when he wanted to tell readers, that "these (lobsters) are the only animals you bring home and kill."

I don't know about you, but my favorite part of the President's speech to Congress this Tuesday was his last sentence: "We are not quitters!"

As soon I heard that phrase, I screamed "yeeaah! yeeaah!" at the TV screen, with half a chocolate chip cookie in my mouth. It was motivational. It was inspiring. It was hopeful.

As I listened to her lecture tonight, this time munching on a Dorito ('cause that's all the "gourmet" I could afford in this recession), I thought, wow. Reichl's story of how she brought "change" to Gourmet magazine, sounds so Obama-esque.

Reichl said that when she joined Gourmet 10 years ago, "it was like a 19th Century publication, and every [editorial idea] had been set in stone, three years before." She wanted to change the status quo, she said.

Unfortunately, Reichl's bold, new, stimulus plan to add more stories about farming and sustainability to Gourmet magazine, caused a stir. Hundreds and hundreds of displeased readers sent letters telling the newbie editor that she had "just destroyed the best magazine in America!"

Amidst all that reader backlash, some of us in Reichl's position might have grabbed our foie gras lunch bags and run for the hills! But, Reichl persevered...in true Obama fashion.

She is not a quitter!

She responded to almost every disgruntled reader, assuring them that her plans for Gourmet were going to work. In fact, she spent the first 100 days of her job doing so, she said.

Soon enough, the same readers that had tormented her in the beginning, accepted the new changes she'd brought to Gourmet. In fact, some of them wrote to her recently, saying, "thanks for the changes, Ms. Reichl! I realize now that if I was getting the same magazine I was getting 10 years ago, I'd be very disappointed."