A version of this article appeared in The Star Ledger

When a family buys a puppy from a New Jersey pet store, it's doing more than just exchanging money for a pet. Most pet store puppies come from puppy mills, so when consumers buy these dogs from pet stores, they are in fact supporting an industry that systematically abuses animals for profit. 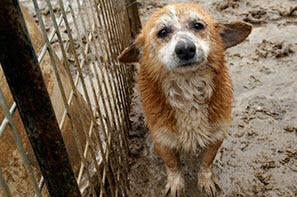 In puppy mills across the country, dogs are typically stacked on top of one another in tiny, wire-floored cages that can injure their paws and legs. Female breeding dogs are forced to bear litter after litter without any time for their bodies to recover. Once they can no longer produce puppies, these mothers are often callously discarded or killed.

Conditions at puppy mills are reprehensible and intolerable, but many consumers are unaware that these sites are by far the leading source of pet store puppies. If pet stores are legally allowed to use unethical and inhumane breeders and brokers and to keep those sources secret, consumers have no way of making informed decisions when they bring a new pet into their family.

In December, New Jersey lawmakers took a strong step to insert accountability and transparency into the industry by unanimously passing S.1870 to amend New Jersey's current Pet Purchase Protection Law. This new law would force New Jersey pet stores to disclose the breeders and brokers that supply them, giving consumers a chance to make informed decisions. It would also prohibit pet stores from selling puppies from breeders that fail to comply with even minimal federal and state standards, helping to put pressure on some of the worst industry participants to significantly improve their practices.

This law protects both animals and consumers, and we're grateful to have worked closely with the bill's sponsors and to have helped push it through the legislative process.

Now it's up to Governor Christie to take the final step by signing this bill. New Jersey residents can help by contacting the governor and telling him that Garden State animals and consumers deserve to be protected, not exploited.