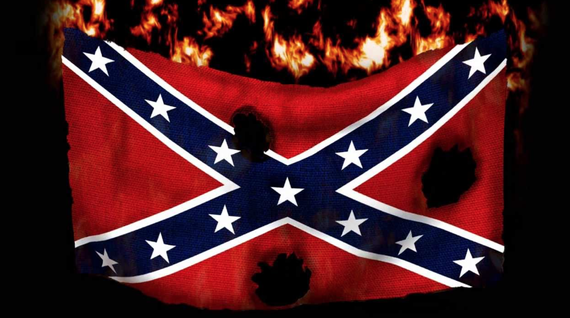 By refusing to lower its Confederate flag in front of the state capital to half-mast, South Carolina is raising its middle finger to America. It's even more glaring in the face of the state's American flags, which were all appropriately lowered to half-mast out of respect for the horrific mass murder at the Emanuel African Methodist Episcopal Church in Charlotte. But it's worse than that. For most Americans the Confederate flag is as offensive, as repulsive, as the swastika is to Jews.

The real question is: why does South Carolina insist on flying this venomous flag at all, right there on the grounds of the state capital?

Many folks look to the Confederate flag as a source of "Southern pride," as they describe it. Pride in what? That they enslaved millions of African Americans? That they imposed themselves on their women? That they callously broke families apart? That they rejected the United States of America's democracy, seceded from the union and went to war over the disgraceful insistence on maintaining their ownership of their fellow man, in subservience? A war that cost 620,000 Americans their lives?

South Carolina first flew the Confederate flag on top of the Capital dome in 1962 - their response to the widespread and growing push for civil rights, a movement they objected to - because to them, and to most of the rest of us to this day, it symbolizes the South's initial struggle to preserve its "right" to enslave blacks. After facing their own protests for flying the flag, they were forced to move it to front of the Confederate Soldiers Monument - still on the Capital's grounds.

A few years later (1968), in response to widespread demonstrations against the Vietnam War, and ultimately triggered by the burning of an American flag in Central Park, New York City, Congress passed the Flag Desecration Law. This law prohibited any display of "contempt" against the flag, and made such a thing illegal until the Supreme Court overturned it the next year.

The Supreme Court made "flag desecration" legal in 1969, declaring that the burning of the American flag was protected by the First Amendment.

If it's ok to burn our American flag, then it's sure as hell ok to burn the Confederate flag.

Want to send a message to South Carolina and the rest of America? Want to demonstrate magnanimous visible support for racial equality? Want to stand united as genuine Americans? Get yourself to the South Carolina State House, or the climb the steps to the Lincoln Memorial, or stand out in the plaza in front of the Alamo. Gather on Pennsylvania Avenue in front of the White House. Bring a Confederate flag, and torch it. Burn it. Send it up in flames and make it clear how most Americans view the public display of something abhorrent, a symbol that stands for the worst example of criminal human cruelty and blatant discrimination in our country's history.

(By the way, Mississippi may be worse: their official state flag includes a full reproduction of the Confederate flag).

Grieving families in Charleston, the ones who lost nine brothers and sisters, fathers and sons, aunts and uncles, and a grandson, are gracious enough to be forgiving the shooter. Beyond the pale. Beyond any reasonable expectations. This twisted racist of a demon, this wannabe white supremacist, deserves no sympathy, and yet here they are, some of Charleston's finest, forgiving him. Most Charleston citizens, and South Carolinians, claim there is genuine love for each other across the city, and state. Non-discriminate, unhesitating love for their fellow man. And they continue to demonstrate their love throughout the state, as an example for the rest of us.

Here's what I say: honor these people. Acknowledge your love for one another. South Carolina is in a position to send a signal to the rest of the world. Do something dramatic. Create a watershed moment. Send a strong unmistakable message to Charleston, and Ferguson, and Atlanta, and Madison, and Staten Island - and America and the rest of the world, that we are finally dedicated, one and all to eliminating the ugliness of racial discrimination.

Governor Nikki Haley, "take down that flag!" Get rid of it. Put it away. Tuck it away in that museum on your state capital's grounds, the one dedicated to ... Confederate Southern pride. The one that proudly displays South Carolina's session flag right on their website. That's owned by Charleston's chapter of the United Daughters of the Confederacy.

But get it the hell out of sight and get with the rest of America.

One more thing: how was this punk - charged with a felony (possession of Suboxone, a prescription narcotic) - able to have a gun in his possession in the first place? The killer made his intentions, his feelings about blacks, clearly known on his own website! By law, he should not have been able to buy a gun from a dealer - where background checks are required. They are not required at gun shows, where nearly 50% of all gun purchases are made (see my earlier columns on various gun control - or lack thereof - issues). This thing stinks all the way around, and runs to the heart of the unique challenges - and failures - that exist in our ... so-called democracy. At long last, something must be done. Something. Anything.

Enforce the existing laws. Require background checks!! Require a 30-day waiting period!! There are no rational reasons not to implement these two simple steps nation wide. Are we Americans going to allow the NRA to continue to put our lives at risk without the slightest checks on the grotesque accessibility to guns, many of which end up as murder weapons?