Just 20 days after the 2012 election, the United States Commodity Futures Trading Commission (CFTC) brought its hammer down on Intrade, the most recognized prediction market in the United States. This action was not entirely surprising and indeed its specter may have kept some traders away. Yet, despite this, and while Intrade is just one of many valuable sources in understanding upcoming events, Intrade's volume and reach was especially critical in understanding the real-time impact of major events. Whatever the CFTC's reasons, the crackdown represents a win for entrenched financial and gambling interests, and a loss not just for Intrade and its U.S.-based traders, but for researchers (including three Nobel Laureates) who study the use of markets as forecasting tools.

The CFTC ruling will bar United States-based investors from utilizing Intrade moving forward. The ruling creates a non-negligible possibility that the prediction market could close, as the CTFC has previously noted that up to 40 percent of Intrade's users are located in the United States. At minimum, if it survives, the ruling will restrict the dispersed information that Intrade was able to collect from users within the United States.

The price-divide between Betfair and Intrade, in both 2008 and 2012, was sustained in part by traders' fear that something could happen to Intrade. Betfair is the largest prediction market in the world, but does not have access to United States users and does not cover as many United States-based political questions. In 2008 and 2012 it consistently traded more confidently for Obama than Intrade, which ultimately proved more accurate. In a paper presented to the National Bureau of Economic Research in October, David Pennock and I posit that the counterparty risk of investing and holding money in Intrade (i.e., the worry that Intrade would not be able to return investments due to either legal or monetary constraints) was a major reason that investors did not close this price misalignment.

Fundamental data and polls already supplement prediction markets in forecasts, while social media data is advancing. Our February 2012 prediction had 50 of 51 Electoral College races correct based on fundamental data only -- past election results, economic indicators, presidential approval, incumbency, and senatorial ideology. Our model adds prediction market and polling data slowly in the spring and early summer, until they finally dominate later in the cycle. And, Intrade is just one of a few prediction markets that we aggregate; popular media's fixation on Intrade's price versus aggregated prices made it more susceptible to possible manipulation. Aggregating not only improves prediction accuracy, it protects our models from the loss of any one particular market. The next frontier is investigating how social media data can further inform predictions.

Yet, prediction markets are a very effective way of gathering and aggregating dispersed information on upcoming events and Intrade has the largest volume and reach in major questions facing the United States. Prediction markets are especially crucial in providing granularity to our forecasts, allowing them to be incredibly accurate on a minute by minute basis and providing key understanding of the impact of major events. Poll-based forecasts are not very useful in the minute and days following major events, because they take days to adjust. And, polls cannot provide the granularity to isolate the impact of events such as a single debate or speech. Below is the impact of the three debates of 2012; the impact of the first debate was historically large. 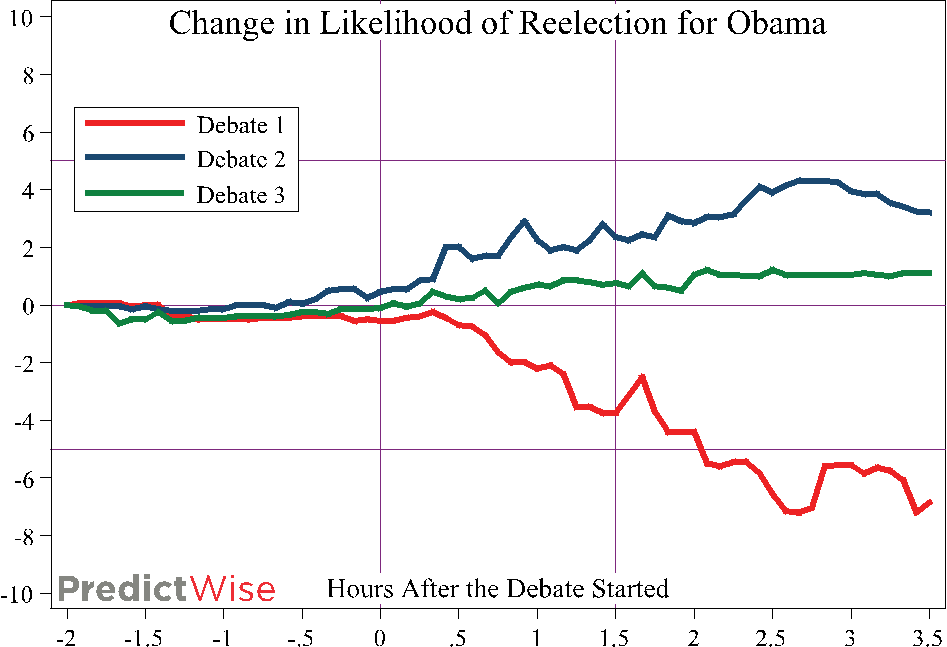 Prediction markets are especially effective in questions with less centralized information; for example, early in an election cycle and at times of high information flow. We were able to provide accurate and calibrated real-time senatorial forecasts months before any poll-based forecast started. While prominent poll-based forecasters made just a scattering of primary predictions, prediction market-based forecasts were incredibly accurate. Further, prediction markets have proved their worth in a host of other fields, including intelligence, where the government is currently running a multi-million dollar experiment.

Prediction markets are extremely transparent and relatively small; this is in sharp contrast to credit default swaps and other popular contracts types that are both opaque and massive. Intrade goes to great lengths to transparently define the contracts in their markets for hosts of potential pitfalls: candidate deaths, calling outcomes, etc. The investors in this market are fully aware of what they are trading and the risks associate with that. Since the contracts opened several years ago, Intrade matched about eight million $10 contracts on either Obama or Romney to win the 2012 election. For comparison, there are about $25.5 trillion in open credit default swaps as of Dec. 31, 2010; credit default swaps are just one of the many notoriously opaque contract types that caused so much misery during the Great Recession.

Research into forecasting political campaigns, effects of public policy, entertainment, sports, marketing, economic indicators, and financial indicators will continue, even if the government shuts down all prediction markets. But, the information has been of incredible value to researchers, with no evidence of a net downside to users. Which makes the CFTC's ruling unfortunate for research and users alike.

David Pennock, also of MSR-NYC, contributed to this article.