Government layoffs, specifically, have carved a deep gouge in middle-class hiring in the years since the Great Recession, as a new report by the National Employment Law Project, a think tank focused on helping low-wage workers, shows. In the chart below, you can see that federal, state and local governments have been the biggest -- and just about the only -- industries that have cut jobs in the past four years. 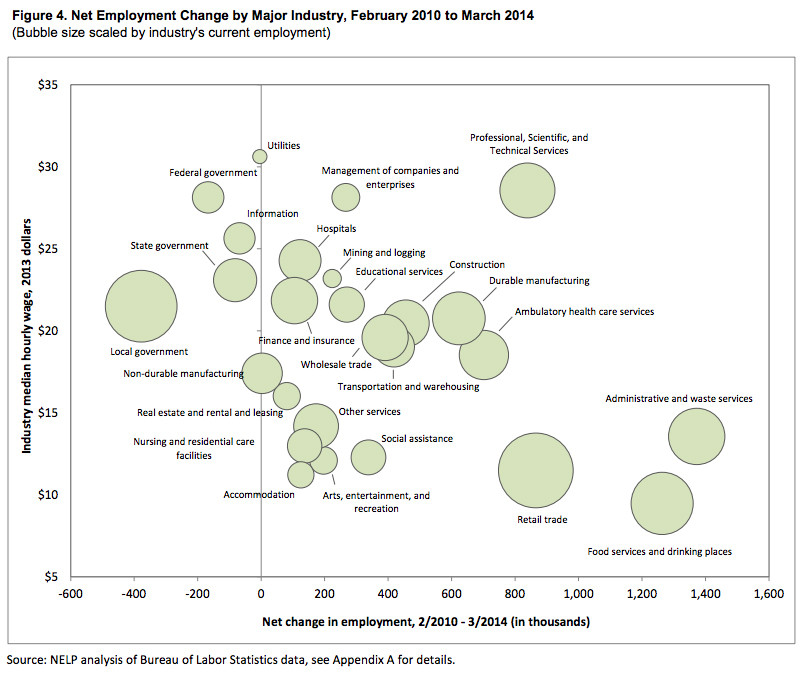 This is the direct result of the austerity obsession Republican politicians mysteriously developed after the inauguration of President Obama in the middle of the financial crisis in 2009. They pushed to slash government spending, leading to job cuts at all levels of government -- exactly the wrong thing to do in the wake of the worst recession since the Great Depression.

Many of these new low-wage jobs are in retail and food service, two of the industries with the fastest job growth during the recovery, which are also notorious for paying rock-bottom wages.

That means government job cuts have helped accelerate the recent decline of America's middle class. Between 1971 and 2010, the middle class' share of income has dropped from 62 percent to 45 percent, according to an August 2012 report from Pew Research.

The right's austerity fever, fueled by a now-debunked research paper, has hurt the entire country, potentially costing millions of jobs and billions of dollars in economic growth over the next several years. Government services on which many Americans depend, like school-bus service and government-subsidized affordable housing, have become a luxury.

One way government officials could help mitigate the low-wage recovery they helped create would be to raise the minimum wage and at least make low-wage jobs pay a little better. President Obama has proposed raising the federal minimum wage to $10.10 an hour, but the proposal is stalled in Congress.