Is this a surprise? It shouldn't be. Really. Thanks to the research of many younger economists, and the work of the most recent Nobelist, Princeton Econ Prof Angus Deaton (he's 69) that researched and documented worldwide poverty, we now know when and how our middle class was created. (His 2013 book, "The Great Escape," maps the origins of inequality and its fallout spanning 250 years of economic history.)

So the current decline in middle class incomes and wealth can be explained as well. It was active government policies that intervened when and where the private sector wouldn't that created our middle class. Although Thomas Piketty in Capital In the Twenty-First Century maintains two world wars destroyed much of the plutocrats' wealth, which helped to equalize incomes after WWII--until the middle seventies, that is.

The current decline in our middle class began when the plutocrats regained power and reduced their tax rates; mainly by repealing as many laws and regulations as they could that had diverted some of that income and wealth to the middle and lower classes--via the National Labor Relations Act that enabled and protected collective bargaining, or social security and Medicare that support seniors and the disadvantaged. In fact, many of those seniors and disadvantaged live in the poorest red states, where opposition is greatest to the government-run insurance programs. 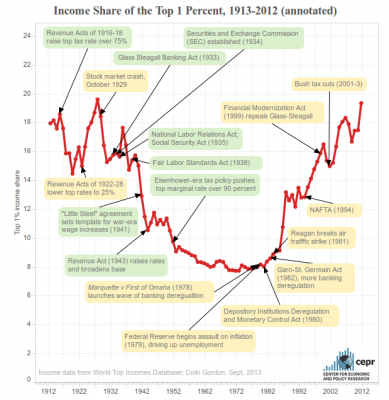 By active government, we mean one with more effective governmental laws and regulations that are able to generate enough revenues to pay for public services, and enforce laws that punish the law breakers. For instance, it was under higher taxes on the wealthiest, such as President Eisenhower's 92 percent maximum tax rate and an inheritance tax, which enabled US to finance our freeway system in the 1950s, the trip to the moon, space travel in general, and later the Internet.

The march to the middle class began in the Great Depression with Roosevelt's New Deal. That was the beginning of social security, workman's compensation, and even the Federal National Mortgage Association that created the 30-year mortgage, enabling more to buy homes. And housing has always comprised the bulk of middle class wealth.

That was why the 1950s and '60s were the periods of fastest economic growth as well. More wealth was shifted to those that spent most of it during record population growth (the baby boomers), which is what generates profits. Whereas, during the Belle Epoque period prior to WWI (as Piketty calls it), inherited wealth for the most part controlled politics--and created the wars.

It was President Reagan who began to dismantle those middle class protections in 1980, by breaking the Traffic Controllers Union (PATCO), and setting in motion deregulation of the banking industry.

But it was Democrat Bill Clinton that continued the Republicans' work by repealing the Glass-Steagall Act that kept insured bank deposits remain separate from higher risk investment banking activities, as well as passing NAFTA, the North American Free Trade Agreement that further weakened unions by encouraging American businesses to migrate to cheaper neighboring countries by lowering their trade barriers.

And President GW Bush completed the damage to middle class wealth by reducing taxes further, thus making US unable to pay for the two wars he started. This ultimately led to the housing bubble, which caused the Great Recession when it burst. Record debt had become rampant, both inside government and the private sector, resulting in near-collapse of the banking system. 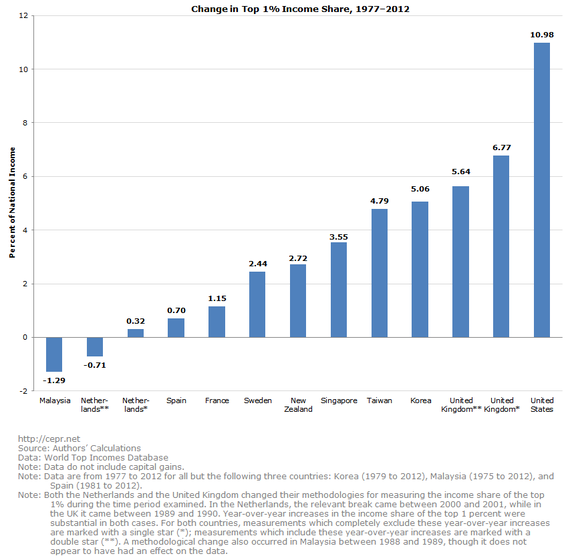 The result of the Great Recession was just the opposite of the Great Depression--a large amount of middle class wealth was destroyed during the housing bubble, whereas the top 1 percent garnered almost all (96 percent as of 2012) of the wealth generated since then--most in the form of market investments such as stocks and bonds. But also due to record corporate profits and CEO salaries, a result of the reduced tax rates for capital gains in particular that has enabled so much Wall Street financial speculation.

"The increase in the share of income going to the top 1 percent of income earners has no precedent elsewhere amongst advanced economies," says the CEPR. So the question remains: Why do we seem to be the only developed country that is unable to sustain a healthy middle class, with all the benefits to economic growth that is passed on to every segment of society?