See: "The Book of Broken Promises: $400 Billion Broadband Scandal & Free the Net" for all of the gory details.

This chart is the commitment, the "promise" of a digital future vs what was "delivered", the reality of the deployment of fiber optic broadband (or higher-speed services) in America by the phone companies -- now AT&T, Verizon and CenturyLink. 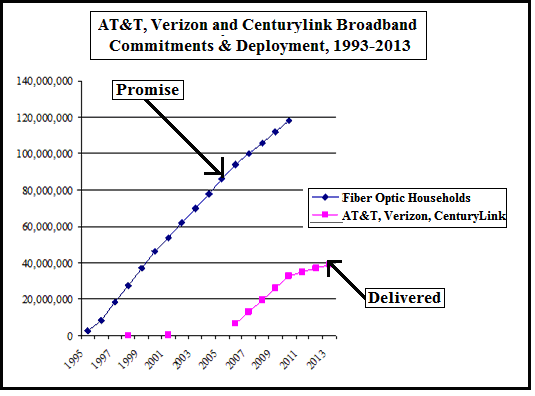 In the last article about broadband I supplied a list of the "video dialtone" deployments that were filed at the FCC by what are now AT&T, Verizon and Centurylink to upgrade the utility copper networks and replace these wires with fiber optics wires -- which never happened. And, as I mentioned, there were plans to build out the utility infrastructure in entire states, like New Jersey, that were tied to these federal 'commitments'. But, the ugly truth is -- customers were charged extra, thousands of dollars per household, for these upgrades, not to mention that the companies got massive tax perks. Worse, these increases are still embedded in the cost of service, and this is on top of other increases over the last two decades to pay for broadband, such as Verizon New York's series of rate increases on regular phone customers, 84% since 2006, for "massive deployment of fiber optics".

We estimate that by 2014, America paid about $400 billion extra in higher phone costs and tax perks to the companies, and based on more recent uncoverings of the phone companies' financials, this number is low. I'll get back to this in a moment.

New Government Study: The Faster the Speed, the Less Competition or Availability.

A new government report by the Economics & Statistics Administration of the Commerce Department lays out that America's higher speed services are mostly monopoly services, and the faster the speed, the less competition is available from a second provider. Or worse, less people can get these faster services, as there may be no provider offering the higher-speed services, especially in more rural areas.

While we have issues with the actual data of the report, what this report clearly shows is that the phone companies never showed up to compete with the cable companies and it left America with no serious wired higher speed broadband competitor, just higher prices, and slower speeds than in other countries. (America is 27th in the world in broadband according to Ookla.)

And people notice these things. In 2013, "ISPs", (the phone and cable companies) were rated 'the most hated companies in America'. Might this lack of competition be one of the underlying forces driving this love-fest for our communications companies?

Let me highlight some of the government's report. 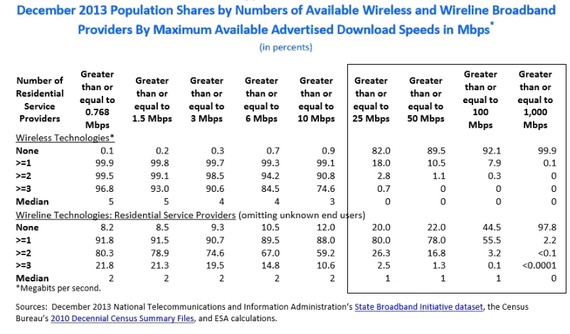 The report, "Competition Among U.S. Broadband Service Providers", shows that only 26% of the US has two wired companies offering broadband service at 25 Mbps or higher in most of America and 20% of the US has no company offering that speed. (NOTE: The FCC's data showed 25%, but the Commerce number can go as high as 37% if you include "unknown users" and don't examine upload speeds.)

And we assume that those who can get the 25 Mbps are getting it from the incumbent cable company, not the phone companies, (though this is based on our own research and not supplied by the Commerce department report).

But it gets worse. The report also found:

And wireless is non-existent at 25 Mbps and not a substitute:

"The report examines both fixed and mobile ISPs. We separate our analysis of these two types of Internet access because some groups consider them to be imperfect substitutes, especially for higher- bandwidth applications. Mobile ISPs typically charge high fees if consumers exceed data usage limits. Furthermore, the service is less reliable, companies have not fully deployed newer generation technologies with higher download speeds and reduced latency, and mobile service is virtually non-existent at download speeds of 25 Mbps or greater".

And the FCC has noticed as they, too, did a report using similar government data. A recent speech by FCC Chairman Tom Wheeler drives home this issue, calling even lower speed services a "duopoly", and "no competitive choice" at 25 Mbps.

"At the low end of throughput, 4 Mbps and 10 Mbps, the majority of Americans have a choice of only two providers. That is what economists call a 'duopoly,' a market place that is typically characterized by less than vibrant competition."

"Things only get worse as you move to 50 Mbps where 82 percent of consumers lack a choice."

What Happened? The Telcos Pulled a Bait-&-Switch and Never Showed Up Until 2006, then Stopped Again.

There is no serious competition because the phone companies snowed America and never showed up; they pulled a bait-&-switch from 1993-2005. Add a lack of oversight, accountability, and enforcement of the commitments to do upgrades, and it is clear that the phone companies' broadband broken promises harmed competition in America for higher-speed services.

The opening chart represents America's fiber optic broadband commitments, based entirely on the deployment plans that were announced by the phone companies in their SEC filed annual reports, statements to the press, or used in their state 'alternative regulation' proceedings, as well as their federal video dialtone filings.

Notice the tiny 'blips' around 1998 and 2001. SNET of Connecticut had rolled out cable services over a fiber optic wire, and once it merged with SBC (now AT&T), AT&T closed everything. Similarly, in Ameritech's five states -- Ohio, Indiana, Illinois, Wisconsin and Michigan, when the company merged with SBC, SBC sold off 310,000 installed lines of fiber optics that had been also used for cable services) to a small cable company, WOW. None of these companies actually fulfilled any of their stated obligations to deploy speeds of 45 Mbps in both directions; and insult to injury, the companies got phone customers to fund (cross-subsidize) these cable networks. But, at least they did something. From San Diego, California to Somerville Massachusetts, there are stories of fiber optic wires being put in circa 1993-1996, but were never used for their intended purpose, if at all.

And instead of fiber, from 1997 through at least 2006, the companies all decided it was OK to use the existing, aging copper networks for DSL, which they had claimed was an 'inferior' broadband product in 1992.

The Plan to Shut Off the Copper and the Real Deployments of AT&T and Verizon.

But it gets much worse as AT&T's announced plans aren't to upgrade their 22 state territories with fiber optics but to shut off the existing copper wires completely. This chart is part of AT&T's information about the 'transition' to IP protocols, filed with the FCC, which is nothing more than a wholesale plan to force customers onto wireless.

In this plan, 59% of current working lines in rural Carbon Hill Alabama will be shut off and customers will be forced onto wireless.

And Verizon has stated publicly that it has stopped the FiOS fiber-to-the-home deployments and is also going to 'kill the copper'.

In a previous article we outlined how the statistics being promulgated by the phone companies, media and even the FCC, including the often quoted 'wireless only' numbers, have serious flaws and are biased toward the phone companies' plans to close down the phone networks.

But the rest of the numbers we compiled are equally as ugly. Regardless of what the companies say, using their own data, we found, as of August 2013: 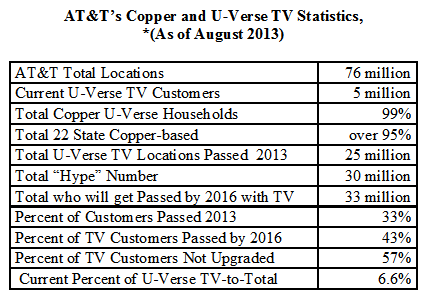 Verizon is no better. 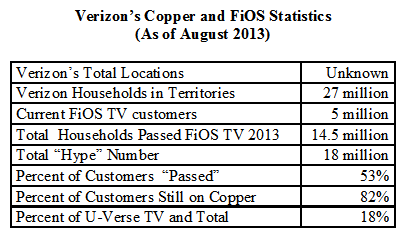 There are Gaping Holes in these Numbers and the Government Numbers.

These numbers sort of dovetail into the government report, as in 2013, 32% of the country had a second cable and broadband provider from AT&T or Verizon. And the discrepancies can be accounted for by all of the numbers not being audited or in the case of the telephone companies, being exaggerated to inflate their coverage or to fulfill some franchise obligation. For example:

However, there is another issue. CenturyLink, as far as we can tell, does not have a significant presence with high speed services, so the AT&T and Verizon numbers may have more penetration in specific areas; it's impossible to tell as no government source gives any information about each company.

And, we need to add - AT&T's entire U-Verse is still only copper-to-the-home, not fiber optics. So, in the opening chart, we added AT&T because it can handle the speed of 25 Mbps, but it can't reach 100 Mbps-- not in the foreseeable future.

And we also must add there are other companies offering higher speed services, such as Google fiber or municipalities or fixed-wireless services and again, it would be an adjustment to this information.

Problems with the Government Data

Then we have the problems with the data that is being used by the government. Besides the fact that it is based on census and sometimes zip-code data, the national Broadband Map database is an atrocious map, which we been writing about since its inception.

This next graphic shows the latest information from the National Broadband Map for my address in Brooklyn NY. Besides being a year old, CSC Holdings doesn't offer service in my area, nor does Platinum Equity. And Time Warner and Verizon actually increased their speed capabilities.

We estimate that this new report is inflating those who actually have broadband and where there is competition by 10-25% based all of these factors.

For all of the details see: "The Book of Broken Promises: $400 Billion Broadband Scandal & Free the Net".