Americans don't want a government shutdown, but are divided on whether it might happen. Two polls get different results on how many would blame the Republicans. And in Boston, the lack of dominant front-runners among a dozen mayoral contenders gives pollsters heartburn. This is HuffPollster for Monday, September 23, 2013.

AMERICANS HOPE TO AVOID SHUTDOWN - A Pew Research poll released Monday finds Americans split on both the likelihood of a government shutdown and which party would be more to blame. Per the report: “About as many say they would blame the Republicans (39%) for such a standoff as say they would blame Obama (36%), with 17% volunteering that both would be equally to blame. This parallels the divided sentiment on the eve of the budget standoff in the spring of 2011, which was ultimately averted….46% say the two sides will reach a budget agreement, 45% say they will not.” A 57 percent majority of Americans thought lawmakers should compromise to avoid a shutdown. Among Tea Party Republicans, however, a different opinion prevailed, with 71 percent calling for lawmakers to stand by their principles, and just 20 percent in favor of compromising. [Pew Research]

Several other polls have asked about a government shutdown in the past week, sometimes with differing results. A quick roundup:

CNN/ORC finds GOP taking significantly more blame - Paul Steinhauser: “With the clock ticking towards two crucial deadlines, a new national poll indicates congressional Republicans would shoulder more blame than President Barack Obama for a possible government shutdown…. ‘Only a third would consider President Barack Obama responsible for a shutdown, with 51% pointing a finger at the GOP - up from 40% who felt that way earlier this year,’ says CNN Polling Director Keating Holland.” [CNN]

Gallup finds rising support for compromise - Frank Newport: “ At a time when disagreements and inability to reach consensus in Congress pose the threat of a federal government shutdown, Americans express an increasingly strong preference for their political leaders in Washington to compromise, rather than stick to their principles at the cost of getting nothing done.” Gallup’s question asks generally about “the best approach for political leaders to follow in Washington,” and does not mention the shutdown specifically. [Gallup]

ABC/Post finds opposition to a shutdown, but not among Republicans - Aaron Blake and Sean Sullivan: “Only about one-quarter of Americans (27 percent) want Congress to shut down the government rather than pass a budget that funds Obamacare — a threat that is inherent in some GOP lawmakers’ pledges not to support any such budget....The same poll shows that 50 percent of Republicans would shut down the government before they would fund President Obama’s signature health-care law.” [WaPost]

CNBC finds strong opposition to a shutdown, including among GOP - Steve Liesman: “A solid majority of Americans oppose defunding the new health care law if it means shutting down the government and defaulting on debt….A 51 percent majority of Republicans generally support defunding with 36 percent opposed and 13 percent unsure. However, when including the issue of a government shutdown and default, the picture changes: 48 percent of Republicans oppose defunding Obamacare, while 36 percent support it.” [CNBC]

HuffPost/YouGov finds more confidence in the likelihood of a deal - Emily Swanson: “Although Americans may fear the consequences of a shutdown, few think one will actually happen. By a 55 percent to 18 percent margin, most respondents to the new poll said that they think Obama and Congress will reach a deal to avoid a shutdown. Another 27 percent aren't sure.” [HuffPost]

TWELVE CANDIDATES FACE OFF IN BOSTON - Boston will hold a primary election for mayor on Tuesday, and the small handful of public polls shows that voter preferences largely divided among a dozen candidates vying for two spots in the November run-off election. Katharine Seelye: "The decision by Mayor Thomas M. Menino not to seek an unprecedented sixth term has brought fresh faces to the ballot. Five of the candidates are black, one is Latino, and six are white. One is a woman, who is also black. Never before has the city, where 53 percent of residents are members of minority groups, had a mayoral roster of such diversity...[Councilman at large John R. Connolly] has built a slight but consistent lead in several polls...Nine of the other candidates are bunched closely enough behind him in the polls that any one of them could power through on Tuesday to the runoff in November. The novelty of a mayoral race and the many variables have made it difficult for pollsters to predict how many voters, and which ones, will turn out." [NYTimes]

The large number of candidates presents pollsters with a special challenge. First, the ballot order in Boston is fixed, and research has demonstrated that the order of names matters. Stanford's Jon Krosnick explained seven years ago that, according to his research, "candidates listed first on the ballot get about two percentage points more votes on average than they would have if they had been listed later." More important, voters "gravitate to the first name they see" especially when they "know little or nothing about the candidates, or when the candidates’ party affiliations are not listed on the ballot, or when the incumbent (whom voters typically know at least somewhat) is not running for re-election." All three factors will be at work in Boston on Tuesday. [Boston ballot order; Krosnick 2006; see also Miller & Krosnick 1998, Ho & Imai 2008]

Equally important is the challenge pollsters face in reading the names of 12 different candidates in the context of a telephone survey. Here research is less conclusive, but pollsters are typically wary of a presenting a long list of choices that respondents will have trouble remembering. Research on questions with two answer choices presented verbally also finds that respondents will sometimes gravitate to the last choice offered when "the questions were more difficult to comprehend." [Holbrook, et. al. 2007]

Here's what Boston's pollsters have done:

Question order - Two of the polls, WBUR/MassINC and Boston Herald/Suffolk University, opted to ask a favorable rating question about each of the twelve candidates, with order of names randomly rotated, followed by an open-ended question that offered respondents the option of hearing a list of names: MassINC's question: "If the preliminary election for Boston Mayor were held today, for whom would you vote? If you would like, I can read you a list of candidates who will appear on the ballot." The Boston Globe/University of New Hampshire poll also asked favorable ratings, but opted to read the names of all twelve candidates in the order they are listed on the ballot. [MassInc, Suffolk, UNH]

Sample & likely voter selection - The Globe/UNH poll used random digit samples of both landline and cell phones to reach all adults, then used questions about voter interest and intent to choose likely voters. Both the WBUR/MassINC and Herald/Suffolk polls said they sampled from official lists of registered voters and conducted interviews via landline and cell phones. MassINC's Steve Koczela explains via email that they identified likely voters "using vote history [taken] from the voter file, and screening questions for city of Boston residency confirmation and vote intent." Suffolk's methodology statement explains that they "used a tight screen to filter out voters who weren't likely to vote or who couldn't name [September as] the approximate timeframe of the preliminary election for mayor of Boston." [Suffolk]

How good are the results?- As shown in the compilation produced below by Boston's Brent Benson, the results of the three most recent Boston polls were similar. All three showed John Connolly as the nominal leader, but with just 14 to 16 percent of the vote and with many other candidates clustered not far behind. The three polls also showed between 20 and 30 percent still totally undecided. In such situations, big shifts between the final poll and election day are a near certainty. [Mass Numbers] 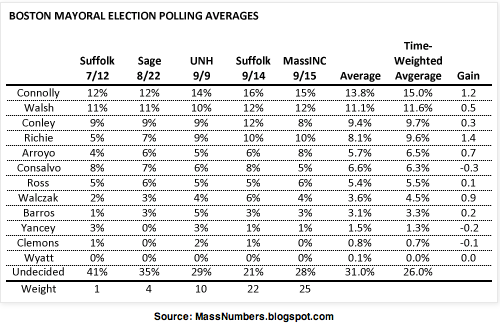 MONDAY'S OUTLIERS' - Links to more news at the intersection of polling, politics and political data:

-Pew Research reports an uptick in the population of unauthorized immigrants and explains it arrives at its estimates. [Pew Research here and here]

-A study finds that early voting is associated with lower turnout. [Pew Research]

-David Rothschild and Rajiv Sethi find evidence of market manipulation by a single trader who lost $3.8 million betting on Romney on Intrade. [SSRN]

-Carl Bialik reports on the shortcomings of the official U.S. poverty measure. [WSJ]

-Businessweek has, for some reason, charted the wealth of the cities that Pepperidge Farm’s cookies are named for, as sorted by the ingredients in said cookies. [Businessweek]