It's bad enough when your parents, friends and plain old budinskis tell you to stick out your marriage, but now the Feds are getting in the act. Walk though a subway car and you might see a poster that shows a couple lying in bed. Mouth wide open, he's snoring away and she, well, she's clearly making the best of it. 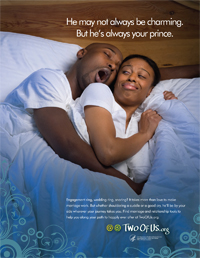 So what's behind this story? The subtext is the ad was paid for by the U.S. Department of Health and Human Services to encourage couples to work on their relationship. According to Metro New York, the posters appeared on mass transit systems in New York, Atlanta, Los Angeles, Chicago and Washington, D.C. The ads direct commuters to a website called TwoOfUs.org that is run by the National Healthy Resource Center (NHRC). TwoOfUs dispenses tips on dating and advice on meeting the challenges of family.

I visited the site and watched a video excerpt of an interview Michelle Obama gave on the Today show. The First Lady was quick to say that she and the President did not want their marriage to appear flawless. Every marriage, she noted, has its ups and downs. Living apart can take its toll. To keep romance alive, she suggested other couples follow their example and institute a date night. Carving out space from the pressures of everyday life, getting away from the kids, the television or any other distraction and focusing on each other makes sense -- although it struck me as another stimulus initiative.

Now I'm not knocking the NHRC or the government's high-mindedness. There's nothing wrong with having a national clearinghouse for information and research that helps troubled couples preserve their marriage. I'm just wondering why the government has such a vested interest in marital bliss. Then it struck me. Aside from the obvious social and psychological advantages -- love, companionship, sex -- there's an economic upside to marriage that is spelled out on the TwoOfUs website. It reads:

"Apart from the initial divorce-related fees, divorce can also have negative long-term financial consequences. Marriage is one of the best defenses against poverty. The poverty rate for children in married-couple families is around 8 percent. In single-parent households, the child poverty rate is around 35 percent. That is not to say you should stay in a truly unhealthy relationship for purely economic reasons. But before you write your marriage off as a total loss, be sure you have accurately calculated the costs--both financial and emotional--of divorce."

So, from the government's perspective, it's a matter of dollars and cents. More divorce, greater risk of poverty, ergo Uncle Sam has to shell out more in public assistance programs. And we certainly cannot afford that, not with all the other tabs we're running up.

I'm not sure putting up posters is going to make an impact on lowering the divorce rate. It's sort of like Nancy Reagan's naive approach to solving the drug problem --- Just say no. But I do have a suggestion that might add to our coffers. Sell the poster. I know plenty of women who wouldn't mind putting it up over their bed to remind their Prince Charming there are grounds for divorce they hadn't considered.

He snores? Get over it. Maybe we can; maybe we can't.

Author, Your Child’s Divorce: What to Expect – What You Can Do