By Tom Devine and Coleen Rowley

One month before 9/11, instructors at a Minnesota flight school call the FBI. Among other suspicious happenings, the most unusual "student" they have ever encountered just plopped down thousands in cash to learn to fly a 747, claiming his only purpose was "ego-boosting." Agents in the Minneapolis FBI Office immediately confirm the information and seek permission to search by warning FBI Headquarters in over 60 emails and frantic telephone calls that "this is a guy who could fly into the World Trade Center." Although the 'Director of Central Intelligence' is briefed within days with a presentation titled "Islamic Extremist Learns to Fly", neither the FBI or CIA staff does anything until after 9/11. Right after the attacks, however, the officials quickly cover-up these pre 9/11 lapses -- actions hastened by internal repression.

This wasn't the first lapse. In the years before 9/11, an FAA "Red Team" warns that it breaches airport security 90 percent of the time, but is censored from writing its findings and banned from retesting. The same Logan Airport gate exploited by the 9/11 hijackers had flunked just months before. After the attacks, the government grounds and reassigns the Red Team leader (a whistleblower) to remedial duties.

In 2003 a Federal Air Marshal (FAM) warns that his agency plans to cancel FAM long distance coverage on the eve of a planned hijacking. His protest leads to congressional outrage, restoration of marshals and prevention of the hijacking. But in 2006, he is fired for "Unauthorized Disclosure of Sensitive Security Information" - an unclassified "hybrid secrecy" label the TSA retroactively applied to the disclosure.

In the wake of our national security and intelligence agencies' failures to stop Christmas passenger Umar Farouk Abdulmutallab and "Times Square Bomber" Faisal Shahzad from attempting to ignite bombs, will any Congressman recognize why the glaring dots are still not being connected? Bureaucratic breakdowns and needless disasters keep recurring, in huge part, because government whistleblowers have been silenced. They do not even enjoy the simple freedom to communicate within the chain of command and defend themselves against near certain retribution.

The current Whistleblower Protection Act is a fraud that, ironically, is the primary reason would-be whistleblowers remain silent observers. It is a trap that rubberstamps almost any retaliation - 204 out of 207 cases have gone against whistleblowers since Congress last unanimously "strengthened" its free speech mandate. The Achilles' heel has been, among numerous loopholes, a lack of normal access to court. Rights are enforced by a system of administrative and limited judicial review that has been highly-politicized and permeated by unrestrained, hostile judicial activism. FBI and intelligence employees are excluded, despite often having the most significant evidence of threats to our country.

During the campaign, the Obama team promised to restore rights and fight for whistleblowers to receive normal court access. Thus far, it has fought relentlessly to complete legislation that restores rights (with jury trial access and normal appellate court review). The House of Representatives already has twice passed the reform, and Senate action appears imminent.

Unlike the House legislation though, the administration's policy and Senate bill offer only window dressing improvements for FBI and intelligence workers. Despite including best practice contractor whistleblower rights in the stimulus law, it entirely excludes them from ongoing contracts receiving some $700 billion annually.

When will the politicians respect reality? President Obama recently fired his National Director of Intelligence Dennis Blair in an ostensible effort to somehow remedy the intelligence community's failures in missing the clues to these last attempted terrorist attempts. High level agency officials such as Blair, however, sit in their offices in Washington. It is front lines government employees who actually do the work, respond to leads, conduct security checks, monitor procedures, and deal with passengers -- they are the ones who not only spot fraud, waste, and abuse but can also identify public safety problems. Without the freedom to warn for those on the front lines, the president and the public will keep getting blindsided.

The politicians need to stop stalling in the end game to restore a credible Whistleblower Protection Act. Delays could be deadly for Americans.

Let national security whistleblowers in from the cold. All national leaders should consider the President's stated realization: "It is increasingly clear that intelligence was not fully analyzed or fully leveraged. That's not acceptable, and I will not tolerate it. Time and again, we've learned that quickly piecing together information and taking swift action is critical to staying one step ahead of a nimble adversary." True enough. But without whistleblower protection for those on the front lines, improved security from current reviews will be as much a mirage as whistleblower protection is today.

My co-author Tom Devine is Legal Director of the Government Accountability Project. He and noted whistleblowers Frank Serpico, Daniel Ellsberg and many more (including myself) will be speaking on the freedom to warn at the 2010 National Whistleblower Assembly, a two-day conference on Capitol Hill in Washington DC this Monday, May 24, 2010 and Tuesday, May 25, 2010. Entitled "The Final Countdown: Honoring 10 Years of Commitment," this year's conference will act as a collective final push to get the Whistleblower Protection Enhancement Act (S 372), out of Congress and adopted into law.

The public, who has the most to gain and the most to lose from recognizing the need to protect government whistleblowers, is of course invited! 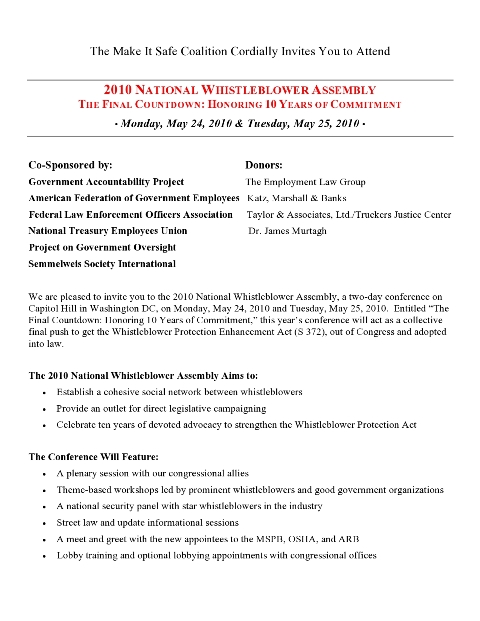 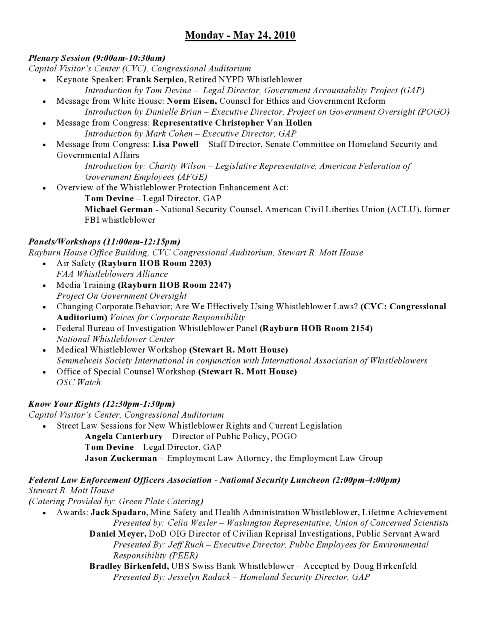 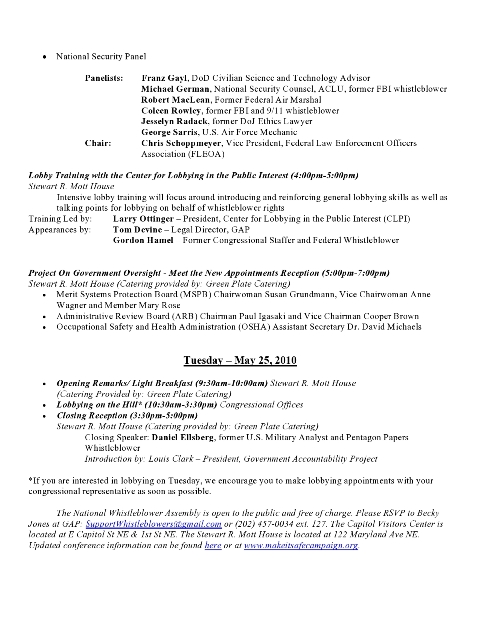