The fight over the Keystone XL tar sands pipeline has generated a lot of debate. But another fight brewing out west in California is equally symbolic of the current debate raging about our energy future.

Just as the decision on Keystone XL is firmly on President Obama's desk, the call on whether or not to allow fracking in California is firmly on Governor Jerry Brown's. Fracking, the "hydraulic fracturing" process most commonly used to extract natural gas from fissures underground. In California, proposals are now on the table to use fracking not just for gas, but for shale oil, high carbon, dirty fuel that is a carbon weapon of mass destruction (to borrow a phrase from Secretary Kerry) that shouldn't be detonated.

Similar to President Obama, Governor Brown likes to think of himself as climate champion. In a recent speech, Brown said, "The challenge facing California is not just drought today; it's climate change, now and forever." But just like President Obama, Brown has refused to stand up to Big Oil. At that same speech where he tried to rally the crowd on climate change, Brown was interrupted multiple times by fracking activists who demanded him to change his position. Brown just looked awkward and tried to change the subject. 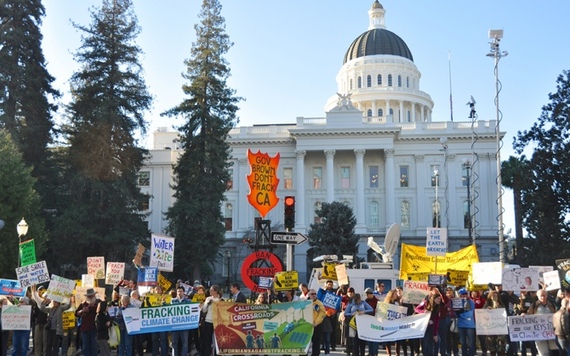 Both the fight against Keystone XL and California fracking are emblematic of the new fault lines of the energy and climate debate here in the United States. After years of climate-related disasters, from the Colorado wildfires to Hurricane Sandy, it has become politically untenable for Democrats -- and an increasing number of Republicans -- to deny the necessity of doing something to address the climate crisis.

However, true to form, politicians want to have it both ways. They want to have their clean energy and eat their fossil fuels, too. Cue the "all of the above" energy policy, which has to be one of the least intellectually consistent approaches to governance currently en vogue. Would we accept an all-of-the-above education policy, where we fund more books for our classrooms but then encourage kids to play hooky from school? Or an all-of-the-above drug policy, where we toughen up on policing while relaxing border restrictions on narcotics? What about an all of the above foreign policy, where we treat Russia and the Ukraine the same, handing out our support in both directions?

As Senator Tim Kaine (D-VA) recently said on the floor of the Senate, "When I hear somebody say 'all of the above,' it's like when I ask one of my teenagers something and he says 'Whatever.' I don't like whatever as an answer because it kind of sounds like indifferent, and anything goes and who cares and what difference does it make? All of the above kind of has that attitude a little bit."

Supporting climate solutions in California while allowing fracking is tantamount to buying your kid an inhaler and then making her smoke a carton of cigarettes before taking a puff. That might make sense to a teenager, but it shouldn't make any sense to a supposed climate champion like Jerry Brown.

Just like Keystone XL has become a defining test for President Obama's environmental legacy, and his character, fracking is becoming a high-profile decision Governor Brown. This March 15, thousands of people are expected to rally in Sacramento, CA to push the governor to stop fracking in the state. The "Don't Frack California" campaign has pulled together a wide range of community groups, environmentalists, celebrities (Yoko Ono and Sean Lennon just tweeted about it last week), and is picking up momentum by the day.

When Governor Brown is tempted to try and ignore the protestors that will be outside the capitol in a couple of weeks, he should take a close look at the way that the fight against Keystone has become a major thorn in the side of the Obama administration. After years of simmering opposition, that fight was elevated to the national stage in August 2011 when 1,253 people were arrested at the White House during two weeks of sit-ins. Now, nearly three years later, the fight rages on: last Sunday, another 398 college students were arrested at the White House while nearly another 1,000 rallied in their support. As Ed Schultz recently said on MSNBC, the message of the protesters was clear, "If the president approves this pipeline, there is no doubt there will be an abandoning of the youth vote coming up for the Democrats."

Governor Brown has a choice to make. He can either become a real climate champion and ban fracking in California or he can be known forever as Big Oil Brown, just another politician who refused to go to the mat for a safe climate future. This March 15, thousands of people will be coming to Sacramento to demand an answer. It's time for the Governor to make the right call.