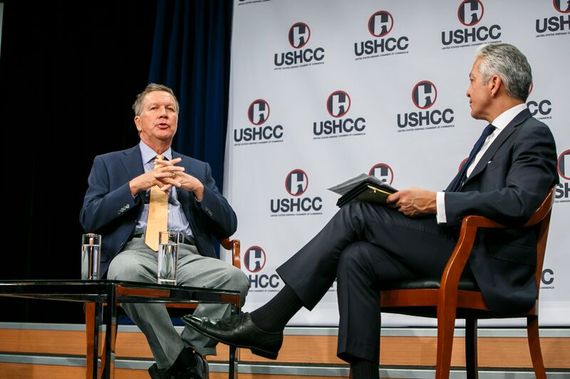 Both Democrats and Republicans recognize the need to win over the Hispanic electorate to take the 2016 election. Today, almost one-fifth of the U.S. population -- more than 55 million people -- are Hispanic. There's no doubt that the Hispanic community has become a defining feature in the changing face of America.

All eyes are now turned toward Ohio, a battleground state in the 2016 presidential race. As the quintessential Midwestern state, Ohio is an unlikely place in which to reach out to Hispanics. And yet, consider this:

There are 400,000 Hispanics in Ohio. That means hundreds of thousands of potential votes up for grabs, some of which are strongly considering Governor John Kasich as their choice for Republican Party nominee.

Sixty-seven out of 88 counties in Ohio have seen a growth of Hispanic residents while the non-Hispanic population has declined. There's been a 76 percent increase in the population since 2000. And on top of that, the median age of Hispanics in Ohio is around 25 years old compared to 40 years for Ohio residents as a whole. Hispanic families arrived in Ohio for jobs and stayed to raise their families, often opening small businesses and becoming part of the community.

As Ohio demonstrates, the United States is a nation of immigrants. By virtue of the success of our small businesses, and the undeniable contributions of our work across various sectors of the economy, immigrants make America more American. Governor John Kasich has embraced this reality.

When we sat down with Governor Kasich as part of our 2016 Presidential Candidate Q&A series, Kasich let us know that the Hispanic community is "integral" to the United States. Unlike some other Republican presidential candidates, Kasich took a strong stance against mass deportation. "It's just not acceptable in America," he said. "We are a country of immigrants."

The economic imperative behind Kasich's support of the immigrant community is clear:

• Immigrant owned businesses contribute over $780 billion dollars a year to the American economy.
• 40 percent of Fortune 500 companies were founded by an immigrant or the child of an immigrant;
• Immigrants are disproportionately responsible for U.S. international patent applications: in 2006, immigrants accounted for 25.6 percent of U.S. international patent applications;
• Immigrants are highly entrepreneurial: in 2013 immigrants formed new businesses at almost twice the rate of native-born citizens;
• 1 in 10 American jobs are created by immigrants.

Kasich was similarly decisive on birthright citizenship, stating that if you're born in the United States, you are a citizen--end of discussion. These strong, principled stances demonstrate Kasich's keen recognition that America's immigrant community is here to stay.

In John Kasich, I saw a man with a strong and proven track record, a steady hand and a willingness to unite people and bring others to the Republican Party and his campaign. He is a uniter rather than a divider who has chosen to give his message of inclusiveness a prominent role in his campaign.