Governor Pat Quinn had his Baghdad Bob moment during an anti-fracking protest at the Illinois State Fair in Springfield.

For those who may have forgotten (or are too young to remember) Baghdad Bob became famous as the perpetually positive Iraqi foreign minister who insisted everything was calm in his country, even while American gunfire and rolling tanks could be seen in the background.

Pat Quinn had his own Baghdad Bob moment during the Illinois State Fair when a reporter asked if the Democratic base is behind his campaign. He awkwardly smiled and claimed "we have everybody with us," while a protest in the background forced him to speak up as they shouted, "Governor Quinn come on down, anti-frackers are in town!"

Quinn's support for fracking continues to be a problem with environmental voters, particularly downstate, as it undermines his claim to "stand with the people, not the powerful."

Illinois People's Action lead the rally in the lobby of the Crowne Plaza Hotel with a 15 foot tall Quinn puppet and 100 people representing twelve grassroots groups from across Illinois. After telling Quinn to "come on down" and getting no response, the crowd left peacefully without incident.

In addition to the rally, grassroots groups from southern, central, and northern Illinois distributed information to the public and held visibility actions during Governor's Day and Republican Day at the State Fair. At least one anti-fracking banner was seen passing overhead on the skyrim ride. Banners held over I-55 won approving honks from truckers.

The Illinois Department of Natural Resource's cozy relationship with the industries they regulate is symbolized by a model oil rig on display in "Conservation World" at the fairgrounds. Conservation World is the agency's area to promote enjoyment of the outdoors... along with oil, coal and gas extraction.

Citizens made an addition to the oil well display with a banner that reads, "Green Jobs Not Dangerous Fracking." Downstate residents want jobs that help create a healthy economy, not dangerous jobs from a here-today, gone-tomorrow industry that leaves poisoned communities and damaged infrastructure in its wake.

Condoms stapled with the message, "The only safe fracking is abstinence" were found at several events around the fair, including the fundraiser for a main sponsor of the fracking law, Senator Mike Frerichs. 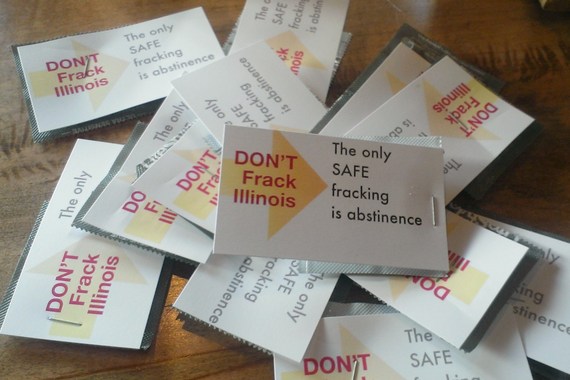 Later that the day, during the Democratic lunch at the fairgounds, Quinn was handed a letter from community members faced with frack sand mining near Starved Rock State Park. Besides destroying natural areas near one of Illinois' most popular state parks, the mines threaten area residents with exposure to crystalline silica, which is identified with causing severe health impacts including silicosis and lung cancer. The group is asking Quinn to establish a moratorium on frack sand mining until air monitoring equipment is installed and the state creates an ambient air standard for silica to protect area residents. Quinn has yet to respond.

The Governor's campaign remains silent about the fracking law he once bragged about passing. Citizens at the State Fair made it clear that ignoring the issue won't make us go away.

Quinn talks like someone who should be opposed to fracking. He calls climate change the great challenge of our time. He admits, "A region's economic and environmental strength is based on the availability of clean water." But Quinn's attempt to launch fracking contradicts everything he claims to stand for.

The industry has already abandoned Quinn. The Illinois Manufacturers Association, which lobbied heavily for the state fracking law, endorsed his opponent, Bruce Rauner. Oil company executives are holding Rauner fundraisers. They used Quinn to get some Democratic legislators and the Sierra Club on board with passing a regulatory law. Now they're tossing him aside.

That leaves one sensible option. He still has a chance to win back his environmental base by making his policies match his promises. The updated fracking rules expected this week may be an improvement over the disastrous first draft. Quinn will portray any minor upgrade as a victory for the environment. But two things are clear a year after the General Assembly rushed passage of the fracking law with less than an hour of public debate.

First, the law is fundamentally flawed with dangerous loopholes. Proposed regulations can only be as strong as the law allows which means they will be inadequate. Even the editors of the Southern Illinoisan newspaper reversed their enthusiastic support for fracking to urge caution, in part because a volume limit loophole in the law could mean widespread fracking that's barely regulated and barely taxed.

Second, new studies keep piling up which show fracking can't be made reliably safe by regulation. Oil & gas polluters argue they should be allowed to continue fracking while we wait for more studies confirming health impacts like birth defects, infertility and cancer. Many residents in potentially impacted communities are uninterested in being subjected to what is essentially a public science experiment.

Quinn's support for fracking is bad policy and bad politics. It's a mistake he should reverse before election day if he wants to be taken seriously as an environmental Governor.