As firefighters continue to risk their lives battling the inferno in southern California, evidence is growing that the Bush administration is not adequately prepared to support them. 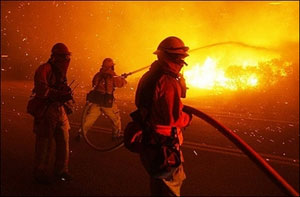 In a June report, the GAO report faulted the U.S. Forest Service, Department of Agriculture, and other agencies for failing to accomplish the "fundamental step" of planning out what assets and resources were needed to prepare for approaching fire seasons. Meanwhile, disaster response problems that have become all too familiar in recent years were also identified: administration officials placing resources where they were politically expedient, and using poorly performing contractors to accomplish critical national tasks.

Strong evidence of the specific federal government failures were provided by the Orange County Register this morning. The paper faulted federal planners for erecting red tape that prevented the use of more DC-10 airplanes to drop flame retardant on areas that were on fire.

"It would be nice to have more such planes available, don't you think?" an editorial in the paper asked. "If the federal government had had its way, even this one almost certainly wouldn't be flying this week....One can understand a certain amount of caution from the Forest Service, but this is bureaucratic overkill."

Robin Nazarro, the Director of GAO's Natural Resources and Environment program, told the Huffington Post why the Forest Service's planning has been inadequate.

"If you don't have goals and strategies for carrying them out, you're in a reactive mode rather than a proactive mode," the report's lead author said. "They say they are using 5 to 10 year averages, but each year the fires gets worse, so they're always underestimating what they need."

The report shows that the Bush administration was warned that the approximately $3 billion spent each year on fire prevention and suppression was not being used appropriately.

"Agencies have not yet improved their systems for determining the appropriate type and quantity of firefighting assets needed for the fire season or for effectively and efficiently procuring them," the GAO states.

The bad planning by the agencies even raised red flags in the White House, where the report's authors say that the President's Office of Management and Budget "told us they would not allow the firefighting agencies to publish long-term funding estimates until the agencies had sufficiently reliable data on which to base those estimates."

"[F]irefighting assets may sit idle at a fire rather than be released for use elsewhere because managers are concerned that they will be unable to recall an asset if they need it later, or air tankers may drop flame retardants when on-the-ground conditions may not warrant such drops," it warns.

Other problems, the GAO notes, involve private contractors, a common malady in the Bush administration. The Forest Service has turned to national contractors that can deploy firefighting crews and aviation resources anywhere in the nation, but a failure to ensure accountability has resulted in poor performance.

"[R]equirements varied from contract to contract and did not ensure that the agencies obtained the most cost-effective assets," it reported. "Further, inadequate administration and oversight of the agreements by the agencies resulted in poor contractor performance and high rental rates."

Nazarro also highlighted the lack of skilled managers within the Forest Service in particular.

"They don't have enough managers trained in whether to engage in fire use or to suppress," the GAO researcher said. "They need 300 managers, but they're short, with fewer than 100 now, and only another 100 being trained."

Members of Congress blasted the Bush administration's firefighting planning this past summer after the GAO report's release. During a June hearing, Senator Bingaman warned that Bush had focused on cutting budgets in place of adequately preparing for wildfires.

"The Administration's budgets indicate that it believes that containing wildfire costs must come at the expense of preparedness," argued Bingaman, chairman of the Senate energy committee. "Its fiscal year 2008 budget proposes a nearly $90 million cut in the preparedness account. But starving the preparedness, wildfire suppression, and other Forest Service programs is not an effective or efficient strategy to contain those costs."