Goya's portraits at the National Gallery are a wonderful opportunity to explore the way artists and sitters have negotiated throughout history their own identity in times of political and social decomposition. Goya's career as a portraitist began rather late, in 1783, when he was already 37, with his portrait of the Count of Floridablanca, Charles III's great Enlightenment minister. His early self portrait, which he probably painted between 1775 and 1780, when he was experiencing his first successes in Madrid, reveals the degree to which he had already mastered the ability to capture physiognomy and personality, making judicious use of everything he had assimilated from Mengs and Velazquez. The difference of style between his selfportraits (and portraits of colleagues), on one side, and the portraits of royalty and nobility is the theme of the National Gallery show. 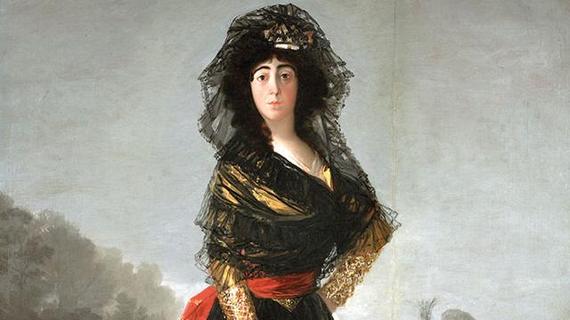 Upon arrival the visitor finds himself among a series of portraits of nobility and royalty that exude awkwardness and, why not, sarcasm. If irony is an agreement between two parties, Goya is laughing by himself here. This is sarcasm not irony. Although the exhibition's catalogue written by Xavier Bray and Manuela Mena Marqués insists on the fact that Goya was functional to the court's interests, the visual evidence shows the opposite. In his royal portraits, the clothes do not make the man but take over him. There is no happiness or introspection in these people, just role playing and a sad sense of resignation. 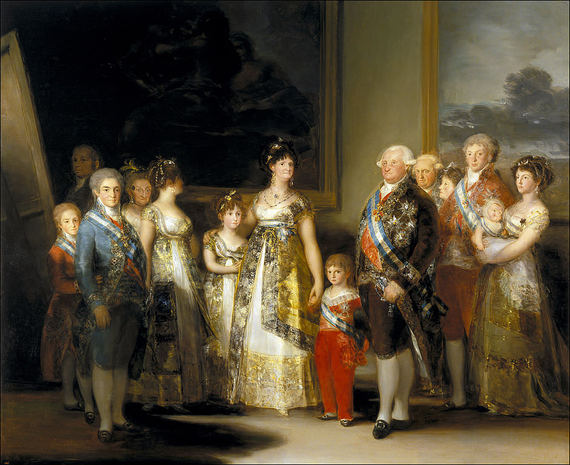 The comparisons with Velazquez are key and they are only evident for those very familiar with the work of both. One of the most obvious examples is Charles III in Hunting Dress which the National Gallery curators wrongly believe alludes to Velazquez's Philip IV as a Hunter. Instead, Goya turns his representation into a joke by making his patron pose like Philip IV's heir, Baltasar Carlos as a Hunter. While Philip is represented as the epitomisation of elegant and nonchalant alertness, Goya's Charles III seems almost crownlike and too exhausted to even think about going hunting. The way the dogs are depicted in Velazquez (as alert) and Goya (as sleeping) is a clear example of what I am saying. Another difference is that while Philip is not wearing any attribute of kingship, Charles feels the need to go to hunt dressed as if he were in the throne room (with band an all). 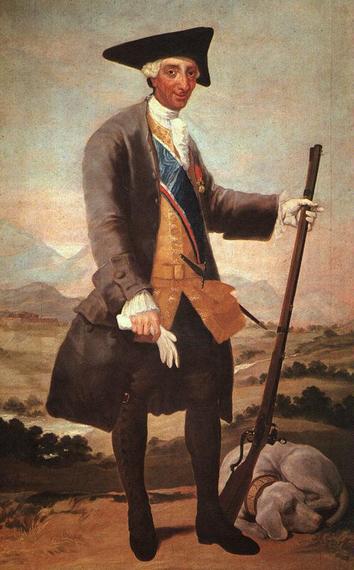 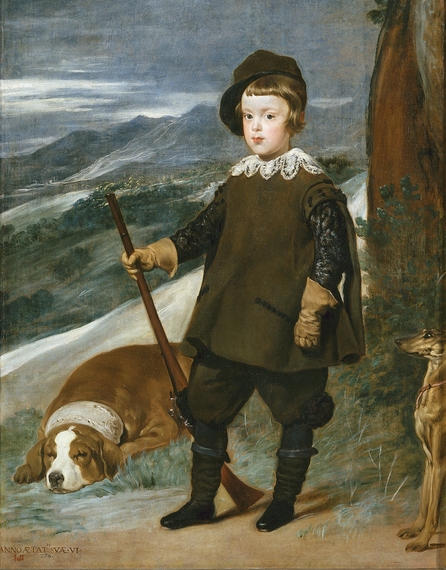 Although the catalogue states that 'The Family of Charles IV' dialogues with Velazquez's Las Meninas, the piece that seems to get really close to it is the portrait of 'The Count of Floridablanca' where a rather dwarfed Goya (as opposed to Velazquez's monumental version of himself in Las Meninas) cannot even manage to get the Count's attention. As we can see, Goya manages to get away with his humor by firstly criticising himself. In fact, in Goya's version the artist becomes another maid (Menina). As in Las Meninas, the paintings inside the painting carry a mesage. In 'The Family of Charles IV', Hercules is dominated by a woman (Omphale) and this scene frames the Queen who seems unaware of what is going on in that painting. The offspring resulting from Hercules' amorous affair were considered the kings of Spain. Therefore the result of that 'fornication' founded his husband's family line. In Las Meninas,the painting above Diego Velazquez is originally by Rubens and represents a mythological scene where Minerva is angrily going to strike the nymph Arachne before turning her into a spider. Placed above Velazquez head, the Rubens warns of the risks of defying those that are above us (as in representing oneself larger and more prominently than the King himself?). In Goya's depiction of the royal family, Omphale seems to warn of the dangers of listening to much to women (even in royal families). Again, humour! 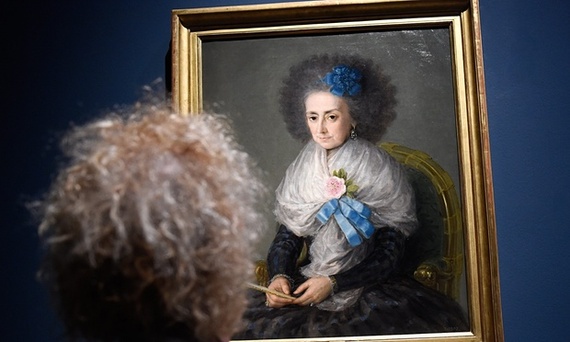 In the exhibition's following two rooms, the portraits of the aristocracy get more precise as an expression of the sitters' interiority and show Goya's masterfully use of the alternation between thin brushwork and impasto to convey depth through opticality. In other words, like Velazquez, he understand that the human eye cannot focus on two planes at the same time. Therefore he plays with the way blobs of pigment are captured by the human eye in the space between the picture plane and the retina. 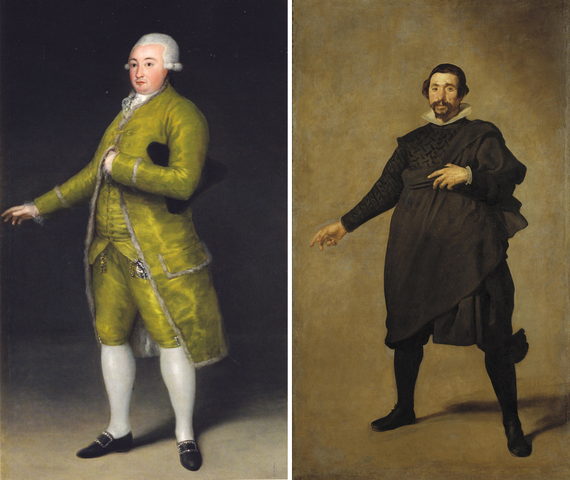 The Countess-Duchess of Benavente looks edgy, chic and fast and this is in part because his whole body is a conflation of different planes of opticality (lace, jewels, silk, background, skin, etc). This reaches a new level in the portrait of the Count of Cabarrús whose pose evokes Diego Velazquez's astonishing floating representation of Pablo de Valladolid. This portrait is particularly modern both in its composition and brushwork and the reason for this might the fact that the sitter himself was particularly forward thinking. In a letter Cabarrùs wrote to Jovellanos in 1792, his character was altogether unconventional. He was a sensitive and impassioned spirit who, concerned about the problems of his day, sought solutions that sometimes seemed shocking to his contemporaries. For example, he proposed that education be extended to all citizens, rich and poor, he opposed the indissolubility of marriage and acknowledged the failure of the ban on prostitution to halt the spread of venereal diseases, suggesting that brothels should be reopened. He also questioned the system of hereditary nobility and of primogeniture. It does not come as a surprise, then, that Cobarrus' portrait is inspired in that piece by Velazquez that seemed to foretell Impressionism.

Although the curators think that the love affair between the Duchess of Alba and the painter is a preposterous idea, the truth is that his portrait of her is a thematisation of something that needs to be erased but will never be. Give me a couple of days and I will discuss that. In the meanting, if you are in London, you must see this show. J A T