Some of the best memories of my travels involve sharing a meal with the local people. From slurping up chanko at a sumo wrestling championship with a Japanese couple in Tokyo to picnicking with Tibetan monks in India to chowing down on tajine with Berber nomads in the middle of the Sahara Desert, the experience combines the very best two ways to get to know a country's culture: conversing with the locals and eating the food.

Such experiences are often spontaneous, as getting a chance to interact with the local people isn't always easy. After all, it's kinda difficult to walk up to a stranger and invite them to share a meal, without looking like a crazy person, that is.

But just as the Internet is opening doors to make it easier to book flights, research destinations and locate unique accommodations, it's also evolving to connect travelers with local residents.

Enter Traveling Spoon, a fairly new online start-up that's enhancing the way we experience travel. The site's concept is similar to Airbnb's, but instead of featuring homestays and room rentals, Traveling Spoon matches travelers with local residents to act as eating buddies and culinary guides. These hosts provide cultural experiences by offering home-cooked meals, cooking classes and even market tours. 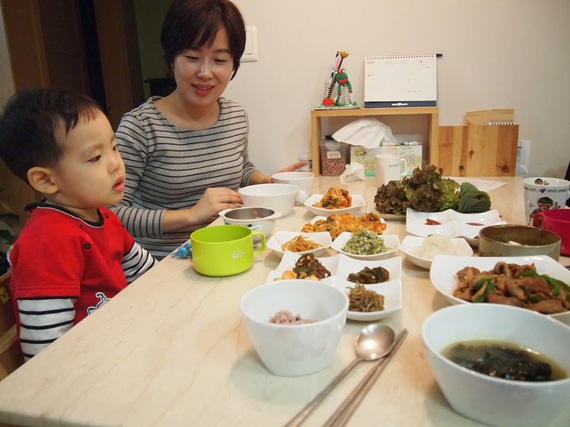 I have been waiting for a service like this to crop up here in Asia for quite some time, so was super excited to hear that it has finally come to fruition. I wanted to be one of the first to take part, so I signed up via the user-friendly form on the Traveling Spoon website and was soon connected to my host, Boyoon, and a date was scheduled for our meetup, based on our mutual availability.

I arrived to Boyoon's modern but homey apartment located in a high rise in the upscale Jamsil district. I couldn't help but smile when her five-year-old daughter, Uyoogjung, opened the door, dressed in a colorful hanbok, alongside her brother, Sunoo, both curious and uncertain as they took me in. Soon enough, their interest in me waned and turned to building blocks and cartoons. 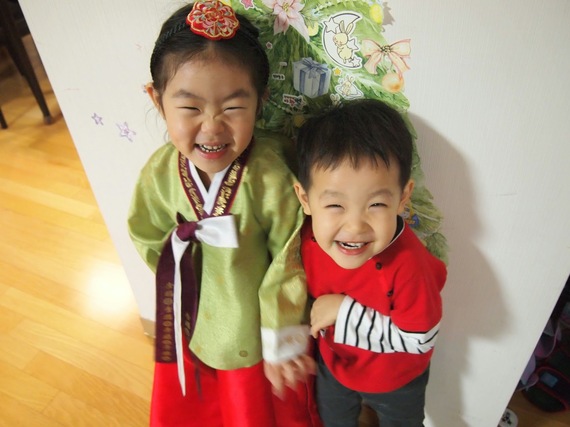 With the children occupied, Boyoon briefly introduced herself and wasted no time moving on to the evening's extensive menu of kimchi, fermented vegetables and traditional dishes. She would be teaching me how to make kimchi buchimgae, a savory pancake, and bulgogi, marinated beef, two of my favorite Korean dishes, neither of which I had ever attempted to make.

As she walked me through the process, she offered invaluable cooking tips: cook beef with pear and pork with apple to bring out the best flavors, cut the kimchi like this to make it appear as a blossoming flower. She also pointed out cultural tidbits about the food she prepared, like how Koreans eat seaweed soup on their birthdays and how each winter, families gather for an entire weekend to make enough kimchi to last a year.

This event, known as kimjang, had just taken place and as such, her kimchi refrigerator was stocked to the brim with all sorts of varieties, many of which we would sample at dinner. Her fridge also contained many condiments used in almost all Korean dishes: ssamjang, gochujang, doenjang. Also made by her mother, these were absolutely divine and far better than anything I've ever had in any restaurant. 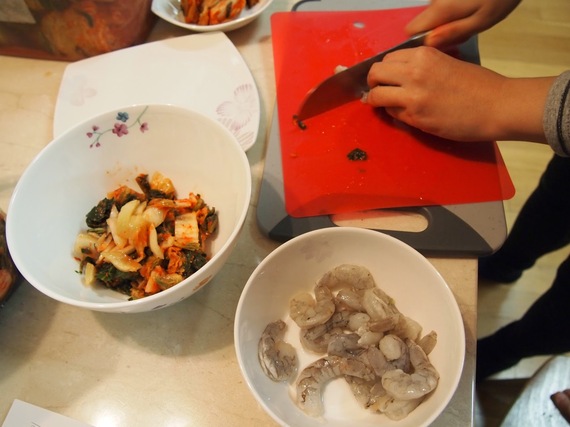 Soon enough, it was dinner time and I - like Uyoongjung and Sunoo, couldn't keep my hands off my chopsticks for long. In traditional Korean fashion, the spread was laid out family-style, in the center of the table, to be shared by all. I've always been particularly fond of this cultural habit, as it really allows diners to connect with one another, which was the case this evening.

Every bite of the food was fantastic and despite all the flavors being so drastically different, they blended together beautifully.

After a simple dessert of fresh persimmons and maeshilcha, or plum tea, it was time to go. The big meal had me and the tots lethargic and I most certainly didn't want to get in the way of their beauty sleep.

Although I've had many chances to dine with Koreans over the years I have lived here, not all travelers have the resources to do so - which is why Traveling Spoon is a great service for all those looking to delve deeper into the country's culture through sharing an authentic meal with locals in the comfort of their homes.

This article was originally published on Seoul Searching.