Frida Kahlo is beloved. The Mexican painter was an intellectual icon during her lifetime, but she has morphed into an artistic deity since she died in 1954. Her former house alone -- Casa Azul in Coyoacán, Mexico City -- has transformed into a museum where disciples from across the globe come to literally worship at her doorstep.

One such disciple is Mexican artist Graciela Iturbide, who received special permission to photograph the Kahlo belongings that remain at the Blue House. From a leg brace to old dishes, the images capture remnants of Kahlo's daily life. One especially intriguing item Iturbide was able to memorialize, is the oft-ill Kahlo's hospital gown, covered in a striking combination of paint and blood. Because, of course, Kahlo insisted on continuing to paint throughout her frequent hospitalizations.

"Frida Kahlo's house has been photographed many times. It is beautiful to photograph, but I am always trying to capture something that has not been seen," Iturbide, one of the artists featured in the upcoming season of ART21's "Art in the Twenty-First Century", explains in the preview clip above. "Thousands and thousands of people come to [her house]. She's still a figure of sainthood."

"I am not a Frida-maniac," Iturbide makes clear, though. "Despite her suffering, she painted. And this is what I admire." 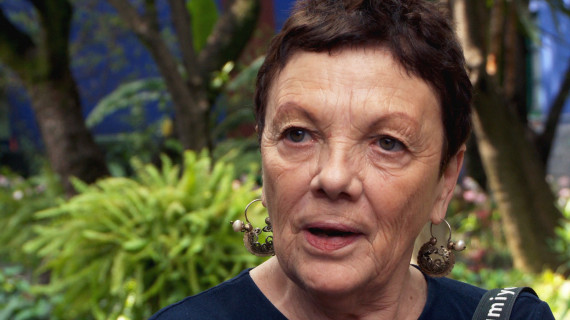 "ART21" is set to debut on October 24 on PBS. We've been previewing clips from the series throughout August and September, giving a sneak peek into the experiences of artists like Graciela Iturbide, Trevor Paglen, Wolfgang Laib and Joan Jonas.

12 Famous Artists On Art And Life