Tim Geithner left office on Friday and the revisionism's already underway. By any objective measure except one, Geithner's tenure failed to achieve its goals. And that one success, in rescuing the mega-banks of Wall Street, may prove to be the undoing of Obama's legacy.  If bank misdeeds cause another crisis, which is very possible, he may be remembered for little else.

This, then, is a time for looking back at Geithner's last four years -- and the President's next four.

I'm normally a big fan of financier/writer Henry Blodget and his website, the immensely entertaining and information-rich Business Insider. But Blodget went off the deep end last week when he wrote "Well done, Tim Geithner!"

"You helped our country get through the storm," said Blodget, "and we all owe you our gratitude for that."

He knows better. So do millions of underwater homeowners, whose continued misery is the result of calculated decisions by Geithner and his team. Geithner's HAMP program for struggling borrowers frequently turned into the horror show known as "extend and pretend," in which victimized homeowners were given a ray of hope by their banks only to be bled dry of thousands while being tricked and tormented -- and eventually foreclosed upon anyway.

Millions of chronically-unemployed or under-employed Americans know better, too. Their plight can be seen in something Blodget's website calls (with characteristic enthusiasm) "The Scariest Jobs Chart Ever!" 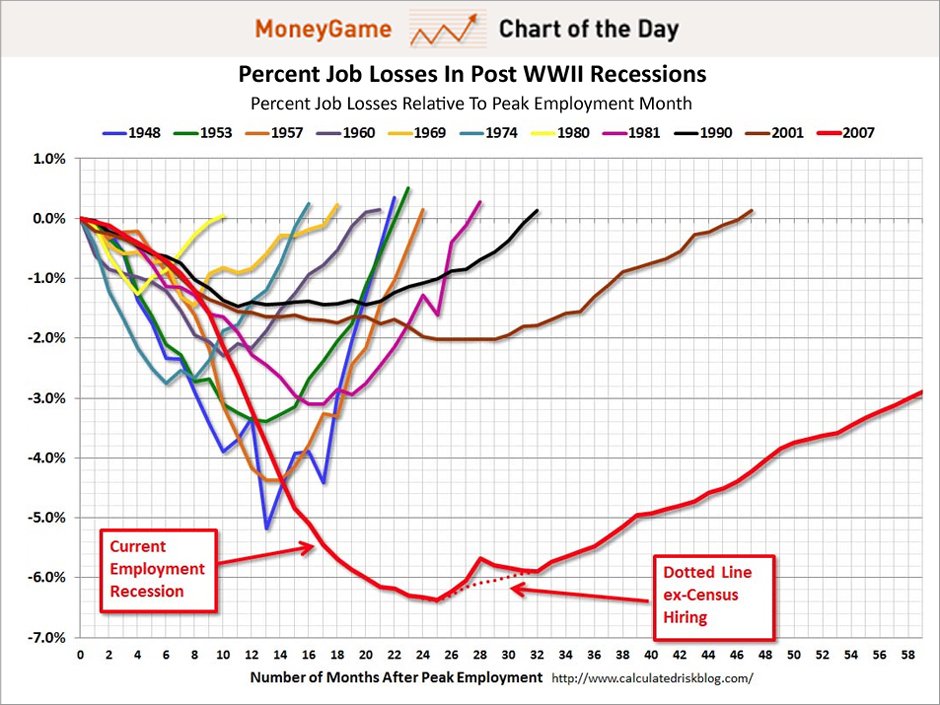 Objects In the Mirror May Be Smaller Than They Appear

Geithner also received a rave review in the New York Times from auto bailout 'czar' Steven Rattner, in a lengthy praise song for the man he refers to as "Tim."

"As we mingled over cocktails and canapés in the ornate Diplomatic Reception Room, the mood was mostly relaxed ..."

Rattner's blissed-out panegyric ignores millions of unemployed Americans, too -- except for a single comment as he winds up. "The problems of high unemployment and slow growth," Rattner allows offhandedly, "remain worriesome."  His prose reflects the same noblesse oblige and self-satisfied world view as his the object of his admiration. It's a world in which conservatives "bark" and liberals "bleat," while Rattner and "Tim" are presumably content to purr.

That's the world that Geithner represented in the President's cabinet, a world where rescuing broken institutions and their overpaid failed executives is of paramount importance, while everyone else's fate is at best a "worriesome" side note. Although, at last report, the mood in the ornate Diplomatic Reception Room remains relaxed.

While not glossing over his errors, Matt Yglesias writes that Geithner was "among the most consequential" Treasury Secretaries of modern times. "Presumably no secretary will ever outdo Alexander Hamilton as a world-historical figure," Yglesias adds, "but by contemporary standards Geithner stands out as a colossus."

I disagree. Geithner's stature is diminished by proximity to Clinton Treasury Secretary Robert Rubin, a truly transformative figure who paved the way for massive bank deregulation and the introduction of catastrophically risky "financial innovations." Geithner was an excellent manager, but he wasn't transformative.

Geithner followed the Rubin score, note by note, even after it had been completely discredited by events. That's like lip-syncing to Milli Vanilli.

"In various encounters over the years," Yglesias writes, Geithner has "invariably stood out for his genuinely funny but very dark humor and keen sense of irony." I don't know about that either.My only encounter with Geithner was markedly lacking either in humor or irony. Maybe the missing ingredient in our encounter was Yglesias himself, who was scheduled to attend but was detained at the gate.

Tellingly, Yglesias describes Geithner as "a man who strongly believes there's a tension between doing the right thing and doing the popular thing." I think that's a good description of a profoundly and reflexively anti-democratic worldview -- there doesn't have to be a tension between the two, after all -- one that's driving much of the economically misguided "bipartisan" consensus thinking in Washington today.

If you want a "colossus" as Treasury Secretary, here's a shout-out to Lyman P. Gage. After all, Geithner never had to defend the Gold Standard.  He built nothing that will last, and even the footprints he left in the sand weren't his own.

Geithner led the TARP bailout, which he and others misleadingly characterized as having "made money for taxpayers." Taxpayers are still on the hook for toxic assets, in fact, and lost enormous sums of investment income through the program.

Geithner told the New Republic that he always "it was going to be very hard, if not impossible to design a financial rescue that was going to be effective in protecting all the innocent victims hit by the crisis and still satisfy the completely understandable public desire for justice and accountability."That sounds like a statement of personal values: If ten million people were victimized by banks, but rescuing them might benefit a few thousand cynical small-time speculators, then they mustn't be rescued. He had no such qualms about rescuing Lloyd Blankfein.

Geithner, and later the President, also falsely claimed that the unethical things done by Wall Street bankers weren't "illegal." That wasn't true (see "Burden of Proof") and was a moral low point for justice in the first Obama term. And as Chief Trustee for the Social Security Trust Fund, Geithner chose to use his influence in an attempt to cut the program via the destructive European-style austerity of the Simpson Bowles proposal (a private document co-authored by the chairs of a failed deficit commission).

Geithner knew about the Libor scandal in 2007, wrote a sternly worded "cover your ass" memo, and then promptly ignored the entire affair.

Worst of all, he bailed out a number of banks that should have immediately been liquidated after the financial crisis. Chief among them was the disastrous wreck known as Citigroup. The creation of this incompetently-run megabank was made possible by Geithner's predecessor Robert Rubin, who then joined the bank after leaving office and promptly became fabulously wealthy.  Geithner also allowed the criminally mismanaged Bank of America to stay in existence, along with the crime-ridden JPMorgan Chase.

Goldman Sachs and scandal-plagued GE Capital weren't even banks,but Geithner and the Fed bent the rules so they could become banks. Then they were rescued too.

The Treasury Department and Federal Reserve used trillions of dollars in taxpayer money to rescue these institutions, which will almost certainty cause even greater damage in the future if left unchecked. And, under Geithner's direction, they asked for absolutely nothing in return. (A new Inspector General report suggests that Geithner's team allowed executives to receive excessive pay packages in violation of government bailout guidelines. )

Unanswered questions also remain about reports that Geithner inappropriately leaked information to bank executives about an upcoming Federal Reserve interest rate cut, which would have been an extremely lucrative piece of insider information.

Where it mattered most, Geithner failed one test of leadership after another.

Geithner was never greedy or cynical like Rubin. And despite having been a registered Republican, he wasn't a radical right-winger. Geithner believed in a certain level of taxation and stimulus spending, with an economic approach that's far to right of Republicans like Eisenhower or Nixon but certainly not as extreme as today's Congressional Republicans.  He's a lifelong civil servant, one who must have resisted the temptation to make big money in private life many time.

Timothy Geithner was a true believer. He just believed in the wrong things.

Now the question is, What does the President believe? Those beliefs will determine whether his legacy is one of genuine reform, or merely that of a middling civil servant who served as a useful steward for the titans of Wall Street.

While Washington debates the deficit, the big banks are bigger than ever -- and nobody's paying attention. Millions of homes are still underwater, the real estate recovery is still fragile, and reasonable employment levels are still many years away.

Despite his own brief foray on Wall Street, incoming Secretary Jack Lew will take office with less of a pro-bank footprint than Geithner had. If the President's turn toward progressive policies is sincere, he'll need to make that clear to his entire Cabinet. If that happens then Jack Lew, not Tim Geithner, could go down in history as a Treasury Secretary "colossus."

And the President's legacy could become one of growth and prosperity, rather than Wall Street prosperity and Main Street stagnation.  Geithner's gone. it's time to get work.