More U.S. high school students than ever are graduating on time, according to new information released by the research arm of the U.S. Education Department.

The percentage of students who graduated from high school within four years of starting ninth grade in the 2006-2007 school year hit a record high, according to the report. "What we see is an increase," Jack Buckley, who directs the Education Department's National Center for Education Statistics, told The Huffington Post. Out of the 4 million students who started school in 2006-2007, 3.1 million -- or 78.2 percent -- graduated with a regular or advanced diploma in the 2009-2010 school year. That's an increase of more than two percentage points.

NCES has put out this report since 2005, but Buckley's team has made estimates back into the 1970s. "This is the highest estimated rate of on-time graduation," Buckley said. The only time the country observed a similar graduation rate was in 1968, he added.

The report also calculated the dropout rate. Around 500,000 students who were supposed to graduate high school in 2009-2010 were reported as dropping out, the report found, for a total of 3.4 percent. That figure represents a decline from 4.1 percent in the 2008-2009 academic year.

These positive trends are likely heartening for the Obama administration. The president, who is starting his second term, has set a "2020 goal" to increase the nation's number of college graduates by 50 percent by the end of the decade. That number would make America the country with the most college graduates per capita. But while the increased graduation rates show that more students are completing secondary education, they're not enough to push students all the way through college. While students may be graduating high school, fewer than half of those in the class of 2012 were "college ready" as determined by the College Board last fall. This means that without significant changes in the rigor of high school, it will be hard for the nation to achieve Obama's aspirations.

Still, growing the percentage of diploma-holders by two points, Buckley said, "is quite a bit." The increased rate, Buckley hypothesized, could be explained by the recession. "We don't know that this is directly the cause, but when we look back over time, there is a correlation with the economy," Buckley said. "When the economy is in decline, there are fewer jobs that high school dropouts can get. Kids, especially boys, are more likely to stay in school when there are fewer jobs."

Buckley added that policies that "paid lots of attention to the dropout rate," such as the No Child Left Behind Act, might be at the root of the positive change.

Notably, despite lingering achievement gaps between the performance of different ethnic and income groups on standardized tests, the gains in graduation rates were distributed across all groups. "We saw improvements across all the races we're able to measure," Buckley said. "Asians had the highest rate, and black students had the lowest." Students that identify as Hispanic have seen an enormous graduation rate increase of 10 percentage points -- jumping from 61.4 to 71.4 percent since the 2005-2006 school year.

The report also broke out graduation rates by state. Vermont led the pack with a graduation rate of 91.4 percent, followed by Wisconsin at 91.1 percent and North Dakota at 88.4 percent. Most Northeastern states came in at between 75 and 90 percent. California and Texas, the two most populous states, came in between 78 and 79 percent. The state with the lowest graduation rate was Nevada, with 57.8 of its students graduating on time. New Mexico, Louisiana, Mississippi, Georgia and South Carolina also came out on the bottom.

While the Education Department has previously released graduation rates for the 2010-2011, those numbers were calculated using a new method, and are therefore not comparable to graduation rates of previous years. 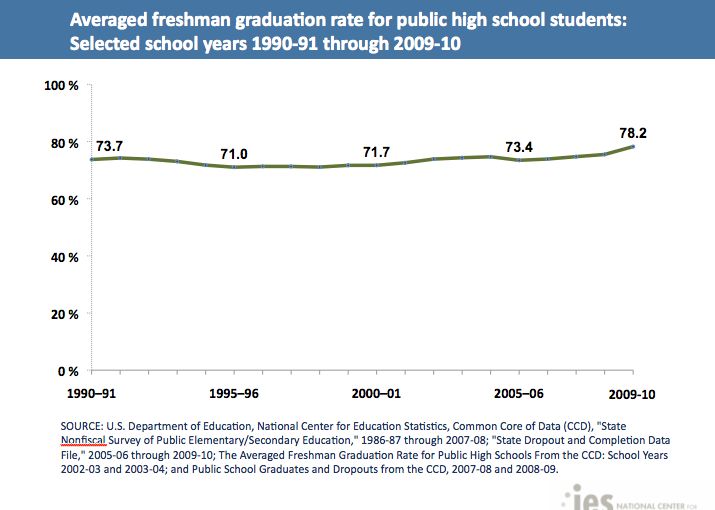