Friday was Grammy nominations day, quite literally. From the early morning hours to late in the evening, The Recording Academy unveiled nominees for the 2015 Grammys. Ed Sheeran and Pharrell Williams started the fun on "CBS This Morning" to announce the nominees for four major categories of the 57th annual Grammys: Record of the Year, Best Country Album Best Pop Vocal Album and Best Urban Contemporary Album. The rest of the nominees were announced on Twitter throughout the day, while Album of the Year was unveiled at the close of "A Very Grammy Christmas" on Friday night.

"This year's nominees are a reflection of the music community's diversity and range of talent, and a testament to The Academy's voting process," Neil Portnow, President/CEO of The Recording Academy, said in a statement. "The Recording Academy is pleased to celebrate this talented crop of artists, nominated to receive music's greatest honor for their contributions to their respective genres. The tone for Music's Biggest Night has undoubtedly been set, and we look forward to producing one of the most exciting telecasts in Grammy history."

Sam Smith, Beyoncé and Pharrell Williams led the way with six nominations a piece, including citations for Album of the Year (Pharrell also produced Album of the Year nominees "Beyoncé" and Ed Sheeran's "x"). But Smith was the day's biggest story, earning Record of the Year, Song of the Year and Best New Artist notices. Smith was pleased with the honors:

Best Country Song
"American Kids" by Kenny Chesney
"Automatic" by Miranda Lambert
"Give Me Back My Hometown" by Eric Church
"I'm Not Going To Miss You" by Glen Campbell
"Meanwhile Back At Mama's" by Tim McGraw ft. Faith Hill

Best Music Video
"We Exist" by Arcade Fire
"Turn Down For What" by DJ Snake and Lil Jon
"Chandelier" by Sia
"Happy" by Pharrell Williams
"The Golden Age" by Woodkid ft. Max Richter

Best Spoken Word Album
"Diary of A Mad Diva" by Joan Rivers
"Actors Anonymous" by James Franco
"A Call To Action" by Jimmy Carter
"Carsick: John Waters Hitchhikes Across America" by John Waters
"A Fighting Chance" by Elizabeth Warren
"We Will Survive: True Stories of Encouragement, Inspiration and the Power of Song" by Gloria Gaynor

Best Dance Recording
"Never Say Never" by The Basement Jaxx
"Rather Be" by Clean Bandit ft. Jess Glynne
"F For You" by Disclosure ft. Mary J. Blije
"I Got U" by Duke Dumont ft. Jax Jones
"Faded" by Zhu

Best Music Film
"Beyonce & Jay Z: On The Run Tour" by Beyonce and Jay Z
"Ghost Stories" by Coldplay
"20 Feet From Stardom" by Darlene Love, Merry Clayton, Lisa Fischer and Judith Hill
"Metallica Through The Never" by Metallica
"The Truth About Love Tour: Live From Melbourne" by Pink

Best Song Written For Visual Media
"Everything Is Awesome!!" from "The Lego Movie" by Tegan and Sara ft. The Lonely Island
"I See Fire" from "The Hobbit" by Ed Sheeran
"I'm Not Gonna Miss You" from "Glen Campbell, I'll Be Me" by Glen Campbell and Julian Raymond
"Let It Go" from "Frozen" performed by Kristen Anderson-Lopez, Robert Lopez
"The Moon Song" from "Her" by "Spike Jonze and Karen O 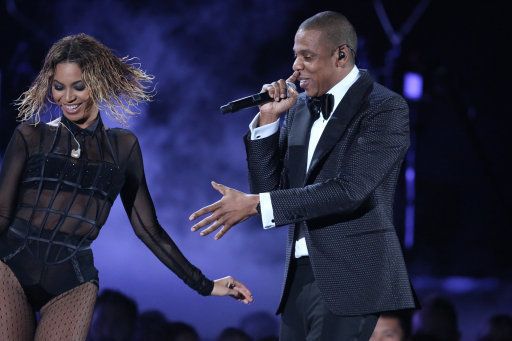