On October 1, the minority Tea Party faction of one party in one house of Congress forced the entire government to shut down, and the protracted shutdown is now folding into the October 17 deadline for raising the debt limit. Republicans' initial ransom demand was repeal or delay of key components of the Affordable Care Act. As it became clear during the first week of the shutdown that the president was not going to sacrifice access to quality health insurance for millions of Americans, Republicans realized they had to redraft their ransom note. As Tea Partier Marlin Stutzman (R-IN) put it, their goal shifted to simply "getting something out of this. And I don't know what that even is." This week, that "something" is starting to look like a "grand bargain" or at the very least a "mini grand bargain." Yet a grand bargain -- whether large or small -- would be harmful for several reasons.

1. It would undermine our democratic process by rewarding extortionary parliamentary tactics. Making budgetary concessions in exchange for a debt limit increase now would encourage any future minority in Congress to blackmail the majority into submission whenever it disagrees with its will. As Theda Skocpol and Ellen Fitzpatrick have persuasively argued, the extortionary behavior of the Tea Party radicals is unique in modern American history and threatens our "fundamental democratic values." Rewarding their hostage taking with policy concessions would betray the will of the majority, and undermine the democratic integrity of our electoral and legislative processes.

2. Giving in to them now would not be the end of it. Most Tea Party Republicans harbor a hatred of government that transcends the kind of rational opposition that is subject to democratic compromise. The hatred is fundamentalist in nature; many view government as evil. If they were to achieve spending cuts in a (mini) grand bargain, they would not be content to return afterward to the normal legislative order. Rather, this would only convince them that further concessions are attainable, if they only remain steadfast. Further shutdowns and holdups would ensue whenever they were dissatisfied with what was achievable through the regular democratic order. Our economy and polity would be perpetually at risk.

3. Deficits are already under control. The Obama Administration drastically cut spending through the Budget Control Act of 2011, which ushered in the sequester that began in March of this year. Under President Obama, the deficit has shrunk from 11.1 percent of GDP in 2009 to 7.4 percent in 2012, and is projected to drop to 2.2 percent by 2018 -- far below the average of 3.8 percent of GDP since 1970. The "clean CR," or continuing resolution that would end the shutdown, would continue to implement these cuts. In short, if deficit reduction were the goal, passing a clean CR and continuing current government funding levels would more than suffice to achieve that goal. In fact, however, that is the wrong goal for a country trying to recover from a deep recession. Stimulating economic growth and getting people back to work is the best way to reduce deficits.

4. Further austerity would run the economy into the ground. This year alone, CBO estimates that sequestration will reduce economic growth by about 0.6 percentage points, or about $90 billion, and cost about 750,000 jobs. Moreover, due to lack of stimulus and hence untapped productive capacity, we are needlessly foregoing close to $1 trillion a year in output, condemning millions of American workers to un- or underemployment due to economic malfeasance. What is needed now to get the economy going again and to put people back to work is stimulus spending, not further budget cuts.

5. The mini grand bargain being currently proposed would exacerbate already intolerable levels of social inequality. A grand bargain is supposed to contain a mixture of tax increases and spending cuts. But what House Republicans are proposing -- and willing to accept -- is only one half of this, and thus no bargain at all. It would likely contain real cuts to Social Security and Medicare in exchange for broad principles of tax reform which would most likely be revenue neutral. Such a "bargain" would undermine retirement security for current and future generations of retirees, who are expected to rely on Social Security and Medicare even more than their parents did. 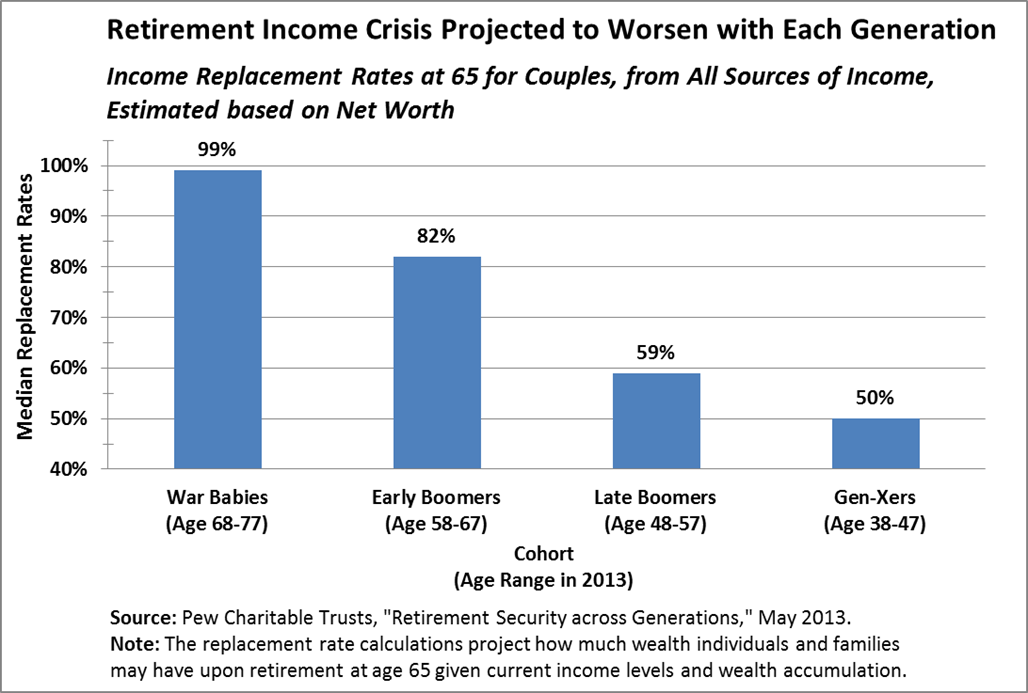 With pensions disappearing and 401(k)s and IRAs providing meaningful retirement income to only the top third of earners, most Americans are in dire need of greater retirement security. In this context, it makes no sense to cut Social Security benefits or to increase seniors' out-of-pocket health care costs.

In sum, Democrats must hold firm and refuse House Republicans' attempt to extort a grand bargain. With 11.3 million Americans unemployed, the economic recovery fragile, and two-thirds of Americans facing the prospect of downward social mobility in retirement, agreeing to cut Social Security and Medicare in exchange for raising the debt limit would be a grand betrayal of the democratic process and the American people.