Hula, getting lei'd, a nice sunset, perhaps some tropical cocktails ... sounds like a good time, right?

Not according to this grandma.

Redditor ratedhero recently posted a picture of his grandmother during her first trip to Hawaii and, by the looks of it, she was seriously unimpressed.

According to ratedhero, they were at a hotel luau on the island of Maui when he took the photo below.

The photo, uploaded earlier this week, quickly found its way to the top of reddit. Curious redditors asked if grandma had even a little bit of fun.

"That's questionable," redditor lindsie128, who claims to be the original poster's sister, replied, including another photo.

"Later in the trip we drove to an amazing spot with a waterfall. The waterfall was down a short, fairly level path in the jungle. My dad asked, 'Don't you want to walk down and see it up close?' She and my aunt said 'No, we can see it fine from the car.'"

Here's grandma and auntie watching the awe-inspiring beauty of a Hawaiian waterfall from the comfort of a rental sedan.

Of course, the internet does what it does best and made a meme of it.

Watch out, Grumpy Cat. Maybe Unimpressed Grandma will get her own movie, too. 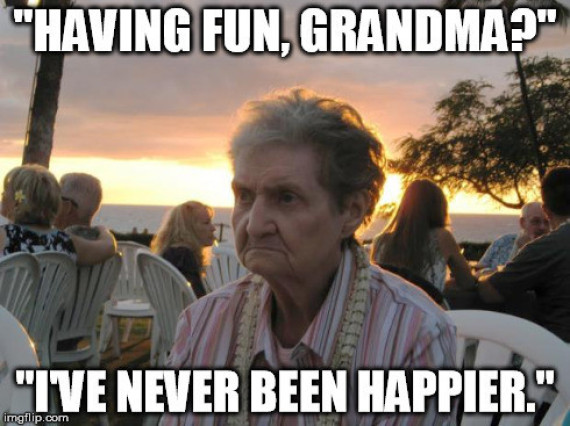