"I feel like I now know and feel the same pain and frustration as animals who are restrained from moving."

My grandmother, Sherrey Reim Glickman -- 89 years old -- recently confided that to me.

We are sitting in her pastel living room at her assisted living facility in New Jersey that she has called home for the past few months. Because of her fast-growing meningioma -- a "benign" (in Grandma's case) but aggressive brain tumor- - she has lost the vast majority of her motor skills. On this day, she sits in a wheelchair, her heavy head beginning to hang forward from exhaustion. For the past few days, she has been in horrid and unending pain, and so now she's on heavy doses of narcotics, resulting, some days, in only brief moments of lucidity.

There is a long silence. I assume the conversation we were having about my work in animal rights advocacy is over, that she has fallen asleep in her chair. I let my secretly swollen eyes scan the room, stopping at "Shmur" -- Grandma's life-size wooden flamingo, leftover decor from her years spent in southern Florida. Shmur was a combination of her nick-name, "Sher," with my late Grandpa's, "Murr." I squint my eyes at the flamingo, cock my head and quietly ask him what he thinks. His beady eyes and long, pink-purple neck remain stoic; he is unflappable. I decide that Shmur understands life in a way I never will.

The thing about watching someone rapidly grow old and sick is that, even as they disappear into themselves, they are sometimes still very much present, and you never quite know when to expect it. Suddenly my Shmur moment is interrupted. I'm startled to hear Grandma's voice, clear as day, albeit a bit slurred. "Placing animals in cages where they cannot move is a cruel and inhumane act," she proclaims. Her head leans forward again, and her swollen right hand falls to the side of her wheelchair. I walk over and gently adjust her, though she is already sleeping.

"Yes, it is," I whisper, adjusting her arm for her, since she no longer can move it on her own.

Grandma became a vegetarian -- mostly vegan -- three years ago, at the age of 86. She wrote about her transition for my organization's online magazine, Our Hen House, in an article entitled "Never Too Late to Change the World." "I had always been an activist for women's rights," she recalled. "I lived life as a woman who moved to the beat of her own drum. It seems like a natural extension that animal rights came next."

After my partner, animal rights law professor Mariann Sullivan, had a letter published in The New York Times (which Grandma described as laying out "how deeply we as a culture are impacted by the massive denial our society has when it comes to consuming animal products -- consuming death really"), Grandma took the plunge. "At long last," she said, "there was simply no way I could continue to support the cruelty of animal production. The world evolves, and so do we."

I myself have been a vegan for a decade -- vegetarian long before that. I'm vegan because it is a way for me to live and eat in harmony with my ethics. I don't believe in finding excuses for oppressing and exploiting other animals -- human or not. I tend to think that being vegan stems from the very best part of me, and that that part of me stems from my grandmother, who had an extremely prominent role in raising me (along with my darling mother who was at times single, and -- until she married my step-father -- plagued by broken relationships).

Grandma's heart was bigger than anyone's I knew. She went to college in Brooklyn in 1940, at the age of 16. She studied to be a teacher, a career that became her heartbeat for a half a century. She loved -- and continues to love -- my cousins and brother and me in a complete and all-encompassing way. The kind of way that can make a jaded, depressed, emotional kid like me believe in the goodness of other people. 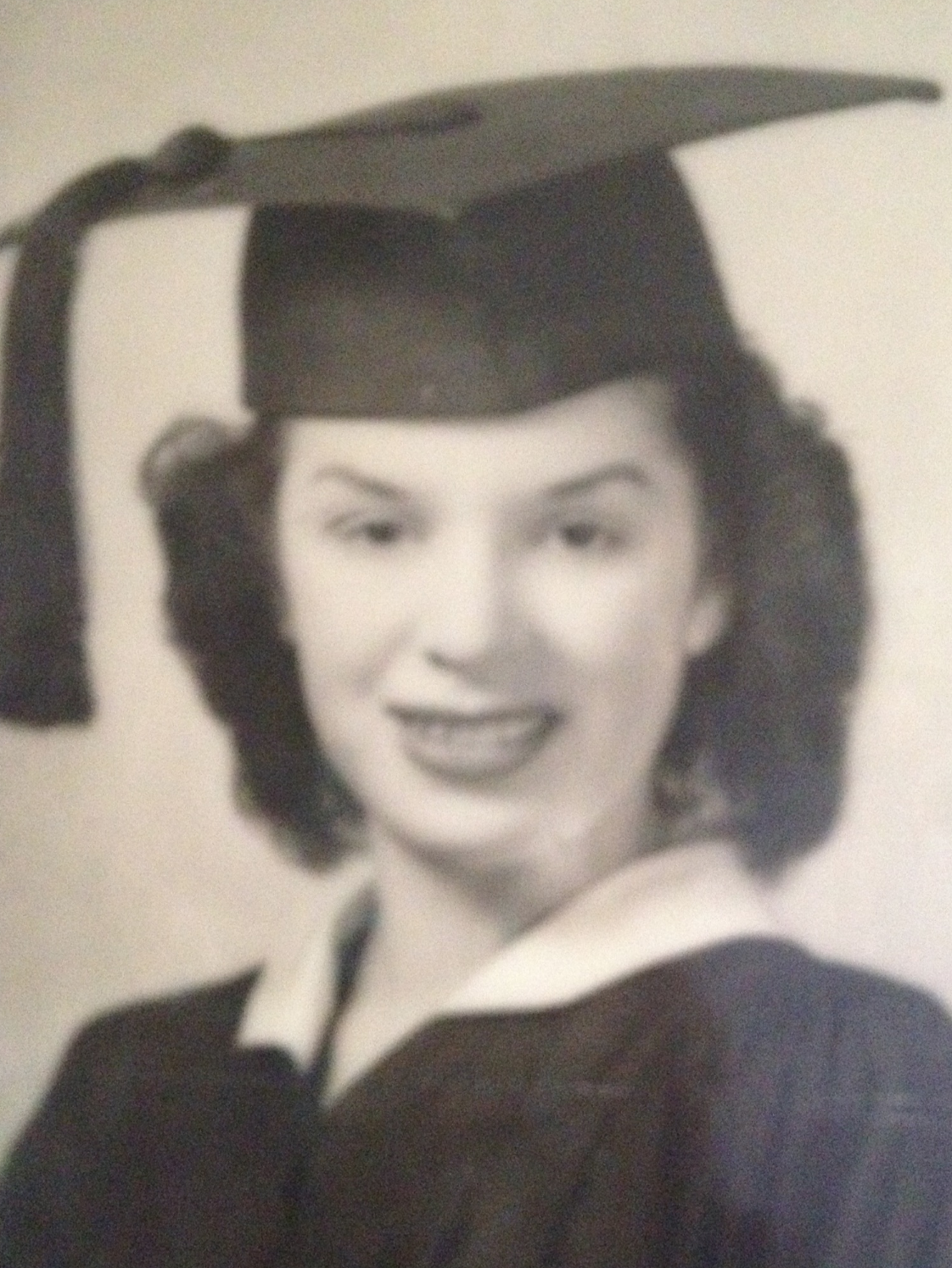 When Grandma was diagnosed with a meningioma 10 years ago, she had surgery to remove it, but the operation was only able to remove a part of it. In the past year, the tumor has grown back quickly and maniacally, bulging through her head in the back.

"Life has a way of making decisions for me, not always to my favor." Grandma told me that a few months ago, when we were shopping around at different assisted living facilities. "I have developed a mobility problem," she told the intake manager at one of the facilities, later that day. "I cannot walk."

That was in April. These days, thanks to the medication, she cannot always talk too well, either. She struggles to stay awake. When she is awake, she's sometimes in significant pain. "My body won't move. It needs to move," she tells me.

"I know, Grandma. I'm here." Sometimes, that is all I can say. After all those years when she fixed everything for me, I can't fix anything for her. I can only be there.

After the wild success of her first article for Our Hen House -- one of the most popular pieces we've ever published -- a few months ago, Grandma attempted to write a second one. Her hands weren't really cooperating anymore, but she did get this down on paper:

"In a perfect world, cows would enjoy open spaces, where they would be able to roam freely and eat grass. Chickens would move rapidly in open pastures, where they would peck at the ground and form strong social circles. Yet, cows are not allowed to move freely. Chickens cannot peck at the ground - they are in horrible, restrictive cages. They are prisoners. They undergo severe mutilation; their beaks are routinely chopped off. I know how I would feel if I were placed in one spot and could not move."

Grandma's aide brings over the dinner menu. There is an ongoing joke at her assisted living facility that the food sucks. The vegetarian option today is something called "veggie cutlets."

"What are these animals feeling?" she wrote, just a few months ago. "They cannot cry out -- who will hear them? So I shall cry and cry out for them. I hope I am heard."

Now Grandma has lost her own ability to move, or even to cry out. It's truly eerie.

I watch her now, awake again, silently smiling as Gypsy -- the Natalie Wood version -- plays on her TV screen. My partner and I recently set up a Netflix account for her, hoping that the familiarity and comfort of the movies and music she has loved so strongly give her a teeny bit of solace. Stephen Sondheim's lyrics permeate the air. "Some people can be content, playing Bingo and paying rent. That's okay, for some people, of one-hundred and five! But IIIIIIII, at least gotta tryyyyyy... "

"I got a ways to go to 105," Grandma tells me, her newly raspy voice still colorful nonetheless. "I still gotta try."

The bus headed back to New York City is leaving soon, so I kiss Grandma's soft cheek a hundred times in a row, and I'm off. Images of my sweet and beautiful grandmother are etched into my head, and her many wise words are etched onto my heart. Quite literally, in fact. A few weeks ago, I asked her if she could give me some advice on what to do with my life. "Live it," she said, not missing a beat. The following week, I got "Live it" tattooed, gingerly and in perfect cursive -- the only way Grandma ever wrote -- over my heart. I wanted yet another way to be sure that Grandma's remarkable take on life will remain with me forever.

It is another day. I am back into the grind of my work, producing independent media that aims to change the world for animals. Blinking repeatedly, trying hard not to cry, I watch undercover footage of animals in factory farms.

Who are my tears for? Are they for these animals, brutally confined, heartlessly mutilated, never experiencing the tiniest kindness, solely for the fleeting "pleasure" of a chicken salad sandwich? Or are they for my grandma, also brutally confined -- by fate -- but loved so much by so many? The parallels, and the differences, are not lost on me. The truth is, I cry for all of them.