Imagine raising your children from infancy, through the "terrible twos," to the "tweens," and the difficult teens, to finally helping them leave home with the tools they need to succeed. Fast forward a few years and you may be thinking about retirement with a few vacations, golf or tennis, and the occasional opportunity to spoil your grandchildren.

Then surprise, your children have children -- but they aren't caring for them well. All of the sudden you become the parents of your grandchildren, and your life takes a familiar but definitely unplanned turn. This is now the reality for a growing number of senior citizens in our nation. Although this is often better for a child than entering foster care, it presents challenges of its own for both grandparent and grandchild.

Today, more than 2.6 million grandparents in America are raising six million grandchildren, according to the U.S. Census. Another 1.5 million children are being raised by other relatives. The reasons for this growing national trend vary, but the reality is that more grandparents are setting aside their plans to care for their grandchildren -- often with limited income and little or no support services.

Since raising grandkids wasn't part of their plan, economic hardships -- including legal, physical, and emotional challenges -- are common for these "encore" caregivers, hindering their ability to support their grandchildren and maintain their own health and well-being. The weak economy, resulting in deep cuts to vital social service programs, has made it even more challenging.

Often they are unaware of and find it difficult to navigate through the services and resources that exist to help them. In addition, a large majority of custodial grandparents have "informal relationships" with their grandchildren, meaning that the grandchild's custody went directly from the parent to the grandparent without involvement of the child welfare system. This informal relationship excludes them from many services and resources that are available to those with legal custody or guardianship. 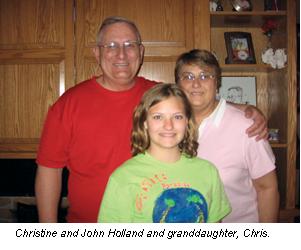 A story in CWLA's recent Children's Voice Magazine highlights the issues seniors face, including those of Frederick, Md.-based grandmother -- Christine Holland. She and her husband John faced many challenges after their granddaughter Chris came to live with them.

After a protracted and costly court battle with their daughter to adopt Chris, the couple decided to forgo reaching out to child welfare, fearing more red tape. What they didn't realize is that had they adopted her through the child welfare system, their granddaughter would have been eligible for health care, child care, and money for college.

In an effort to combat the difficulty of accessing services, the Fostering Connections to Success Act of 2008 allocated funding to establish centralized kinship navigator programs in states nationwide.

At a national level, CWLA has been actively engaged in efforts to advance the implementation process of the Fostering Connections Act. For instance, CWLA is marking 2011 as the Year of the Grandparent: Keeping Kin Connected. Throughout the year, CWLA is paying tribute to America's grandparents and other kinship caregivers and promoting this parenting model as an effective way to reduce the number of children entering the foster care system and keep them connected to family.

As part of this effort, CWLA is partnering with Generations United, AARP, the Children's Defense Fund, GrandFamilies of America, and National Committee of Grandparents for Children's Rights to support the fourth annual GrandRally on September 15th, when thousands of grandparent and relative caregivers will gather on the West Lawn of the Capitol to highlight the critical need to protect and strengthen Social Security to support this vulnerable population.

Although kinship caregivers are not necessarily traditional child welfare parents, as the Year of the Grandparent and other initiatives move forward, kinship caregivers have reason to hope that the system will continue to evolve to meet the needs of their families.

For children whose parents are unable or unwilling to care from them, the love, support, and experience a grandparent can provide is often the next best option. Making it easier for grandparents to transition into grand-parenthood will make this unexpected life change better for all.