There are a group of people who are currently lobbying for grandparent rights. Visitation rights, specifically.

They claimed June 14th as 'their' day.

Flag Day, in the US, has now been co-opted by folks who have their own agenda, and frankly, it's a frightening one.

Many places already have provisions for grandparents to be granted access in the case of divorce or death of their adult child.

Not good enough for these people.

These folks are claiming that being estranged from grandchildren is not only elder abuse, but child abuse as well.

What a load of crap.

Now, I get that estrangement is painful. Not arguing that in the slightest.

Adults absolutely have the right to make choices about the people they have in their lives, *and* those of their minor children. Where in a divorce, visitation, access, shared custody is an issue, because parents are assumed to have equal rights to their children, unless they're proven unfit. Grandparents aren't parents. They shouldn't have the right to drag families into court, to demand access to children.

Not getting what you want isn't abuse.

If the grandparents, for whatever reason, do not have a healthy relationship with their adult children, then how can one possibly justify handing over minor children for visitation?

How is this NOT an erosion of parental rights?

And why do some grandparents think that their desire for a relationship with someone else's children, should supersede parental authority?

It's a disgusting example of entitlement.

Grandchildren are someone else's children. You didn't birth them, you're not raising them, you don't have the right to a relationship that the parents have deemed not in the child's best interest.

I know folks who are estranged from their parents.

I personally know of NO ONE that made such a decision on a whim. It's been a long, hard road to travel, and repeated attempts have been made to repair and resolve any issues. Estrangement has been the LAST option exercised.

What kills me is that folks wouldn't take their adult child to court, demanding use of their vehicle bi-weekly, just because they enjoyed using it. But, folks think that overruling the parents, and having the legal right to force access to their children is a reasonable thing to try to accomplish.

Yes, children aren't possessions. Agreed. But they ARE the most valuable part of any parent's life, far more than a mere vehicle could ever be. And if you wouldn't hand your vehicle off to someone you don't have a healthy relationship with, why on Earth would anyone think that entrusting their child to such a person is a reasonable thing to do?

Why do some grandparents think that they are so entitled that they deserve what parents have said no to?

Grandparenting is a PRIVILEGE. NOT a RIGHT.

If you want a healthy, ongoing relationship with grandchildren, then establish and maintain one with their parents. It's really that clear-cut.

Here's the other thing:

IF these folks were to be successful, the far-reaching implications are massive.

You get a job offer across the country, or in another country. Well, that's ESTRANGEMENT. That prevents folks from seeing their grandchildren as frequently as they are now, so, off to court you go.

What happens if you're making parental decisions that grandparents don't agree with? By granting grandparent visitation rights, it's saying that these folks have a right to a say in the raising of the children, isn't it? So, if the grandparents are against homeschooling, they could take you to court to argue against it, couldn't they?

Frankly, any grandparent who is willing to put a family through a court battle, has, in my mind, proven why they are estranged. They're willing to put the family through financial hardship, to take money out of the household, that is used to support and provide for the grandchildren, in an attempt to force parents to do what they want.

"Sorry kids, we can't enroll you in sports/music lessons/take a vacation/buy you new clothes, because Grandma is making us go to court."

And claiming abuse makes a mockery of those who have experienced actual abuse. It's an attempt to legitimize legally forcing other adults to hand over their minor children, regardless of what they believe is in the best interest of their child.

I find it interesting that the focus is all on the grandchildren. These folks don't talk about repairing a relationship with their own children, it's all about, "HAND OVER MY GRANDCHILDREN!"

Funny, whenever I've read anything about child predators, one of the HUGE warning signs is someone who attempts to go around the parents to access the children.

Grandparent rights is nothing more than an attempt to control other adults, and force them into a relationship that they have deemed unhealthy, while having access to young, vulnerable children.

A child's primary relationship is with their parents. Grandparent rights seeks to erode that, by granting grandparents the same access rights as non-custodial parents.

Imagine, if you will, a child whose parents are divorced.

The non custodial parent has the child every other weekend.

Grandparents get two weekends a month. Heck, even just one.

So, the child loses time with their custodial parent. Or, the other parent has to give up a weekend.

Is it REALLY in the child's best interest to lose time with their *parents* so that the grandparents get what they believe they're entitled to? 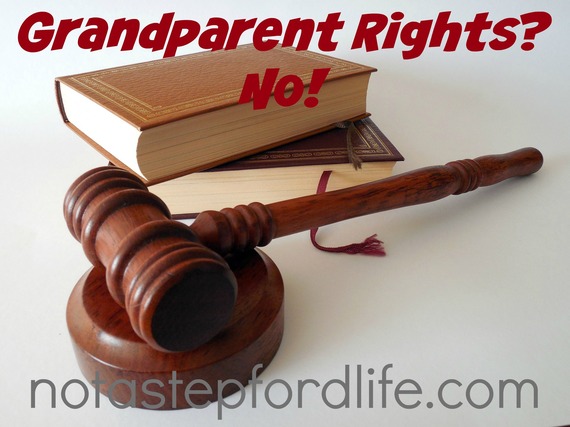 What about what's in the best interest of the child? How can anyone claim that visitation with grandparents is more important than the relationship with the child's parents? What about infants, who are exclusively breast fed? Young children who have never been away from their parents? Should they be forced into a situation that seperates them from their parents, all to satisfy another adult's selfish demands?

Indeed, there was already a case in the US, Troxel vs Granville, where the US Supreme Court said no.

These folks are attempting to get around the US Supreme Court, by claiming it's abusive to be kept away from their grandchildren.

This article was originally published on Not A Stepford Life