At GRAND Magazine, we're on a mission to disrupt thinking about grandparents. The times they have "a-changed" when it comes to the vibrant lives of grandparents, but popular culture has yet to evolve to match the reality. Today's grandparents work and play like no previous generation of grands. We redefine the images of older people while functioning as the glue that solidifies family bonds. GRAND Magazine presents a variety of helpful and entertaining content for today's Boomer and Gen-Xer grandparents with an eye to empowering families to create loving and lasting relationships across the generations.

To punctuate our mission we decided to create an award -- GRANDPerson of the Year -- to highlight an individual who exemplifies the characteristics of a stellar human, who just happens to be a grandparent, who works tirelessly to improve lives for families, just as grandparents do every day.

We had a lively and spirited discussion about the candidates, but one person kept hovering above the others. She had an almost lifelong body of work devoted to advocacy for children and families. She exhibited a relentless passion for public service. She appeared to be a flawless mother and grandmother. And, then there was this: She was running for president.

The person who fit our profile better than any other is Hillary Clinton.

We're on the cusp of the first potential grandmother/POTUS. Talk about a GRANDPerson! We agreed unanimously, though, that we wouldn't choose Hillary because of her potential presidency, we would choose her for everything else she's done up to this point.

No one else matched Hillary's record. Her work for the rights of children and families spans four decades. It began with an internship during college to study the health needs of migrant workers and continued with her legal work for the Children's Defense Fund, and her co-founding of Arkansas Advocates for Children and Families. Later, as First Lady of the United States, she helped spearhead the creation of the Children's Health Insurance Program. As Senator from New York she was part of a bipartisan effort to secure better healthcare for the members and families of the Reserves and National Guard. Additionally, she introduced bills to assist grandparents and other relatives working as primary caregivers for children. On an international level she stood up repeatedly for the rights of women. As Secretary of State Hillary fought sex trafficking and convinced the UN Security Council to adopt a resolution to stop sexual violence against women and children in conflict zones.

And, she's a "Grandma!" (That's what her two grandchildren call her.)

Yeah, that's right. For all of you who may think being "Grandma" means the end of vivacity and energetic enthusiasm for life, you best think again. These days, "Grandma" is synonymous with "look out world, a force to reckon with is headed your way."

So, with great exuberance and admiration, GRAND Magazine is thrilled to announce the awarding of our inaugural GRANDPerson of the Year Award to Hillary Clinton. We hope you'll join us in saluting her and thanking her for helping all families to live better lives.
If you'd like to read our exclusive interview with Hillary Clinton, you can access the issue totally free here. 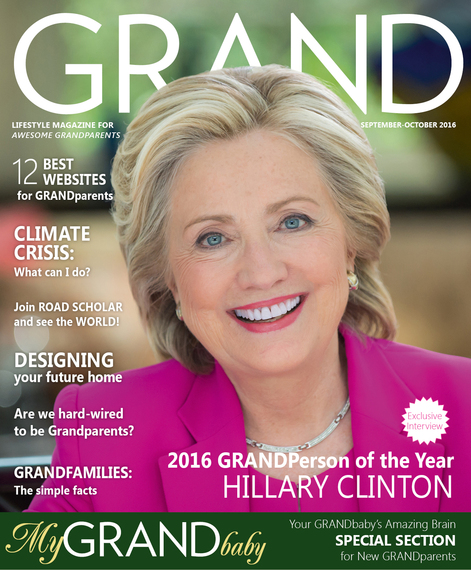 The 2016 GRANDPerson Of The Year Is.....
The World's Most Glamorous Grandmothers