Chef Grant Achatz's Next restaurant, which changes cuisine roughly every three months, is just about ready for its second iteration. After the first theme of Escoffier's Paris, 1906 (and seats selling for up to $3000 on Craigslist), the restaurant is saying au revoir to France and going for a more modern Thai menu.

Thai street food will be featured prominently and "reams and reams" of Thai newspaper will be used to cover the tables and serve the first courses on. In terms of music, there will be "less Thai spa, more Thai hip hop."

The menu prices will be comparable to or lower than Next's Paris prices, with the Thai menu averaging about $100 with beverage pairings.

Achatz has tweeted out a series of photos to add to the anticipated opening (re-opening?).

Want to score some seats? Next diners must buy tickets rather than make reservations. Tickets will likely go live Thursday afternoon (July 7) for this weekend's slots.

See the full menu and a video of the various courses below. 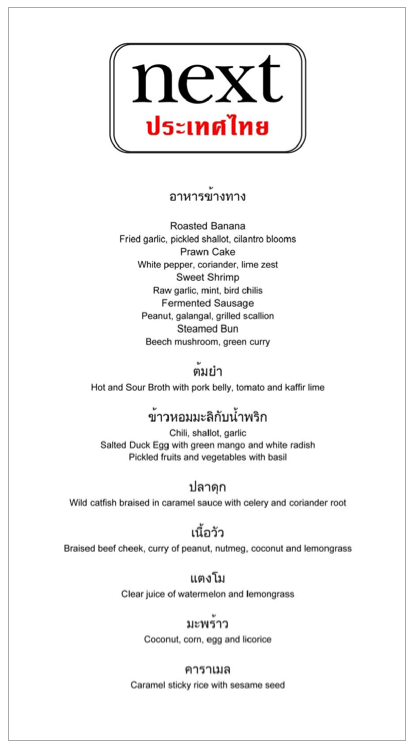