Graphic novels are an interesting medium -- wedged between a standard novel and a comic book, they don’t quite fit in either category, but meld the two into one.

Even the term “graphic novel,” is a point of contention for some scholars. As comic book scholar and author Gene Kannenberg, Jr. told The Huffington Post, via email, the term graphic novel was “coined independently by Richard Kyle (in 1960’s) and by Will Eisner (in the 1970’s) [as] a long-form book in comics form which stood on its own literary and artistic merits, not on a franchised commodity. Those types of graphic novels are out there, but so are a lot of long superhero stories under the same banner.”

For Kannenberg, the term “is more of a marketing term than anything else.”

With the release of "The Dark Knight Rises" today, we decided to go the opposite route and research some graphic novels that don't encompass the larger franchised superhero comics and have been compelling enough to score a Hollywood script.

For example, many people would be surprised to learn that David Cronenberg’s “A History Of Violence” is actually an adaptation of the 1997 graphic novel of the same name by John Wagner and Vince Locke. Or that the 1994 Jim Carrey film, “The Mask,” is actually based upon a series of comic books published by Dark Horse Comics.

Check out our list of those and other notable-but-unexpected graphic novel adaptations in the slideshow below, and be sure to let us know what we missed in the comments.

comics Slideexpand Culture The Mask A History Of Violence 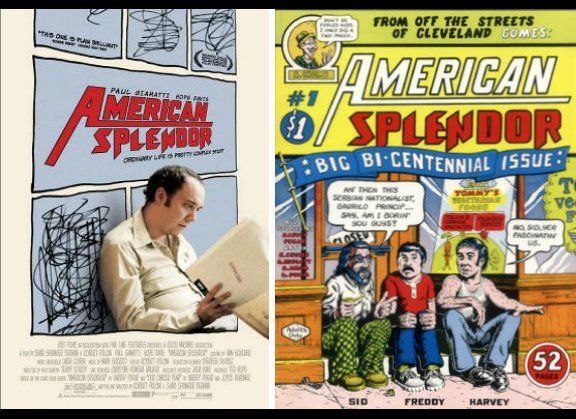 1 / 10
"American Splendor"
The 2003 comedic drama starring Paul GIamatti and Hope Davis is actually adapted from a series of autobiographical comic books written by the <a href="https://www.huffpost.com/entry/harvey-pekar-dead-america_n_642955" target="_hplink">late Harvey Pekar</a> and illustrated by a variety of artists including legendary illustrator<a href="http://www.crumbproducts.com/" target="_hplink"> R. Crumb</a>. Pekar's work is considered groundbreaking for his portrayal of the more quotidian aspects of everyday life.
Wikipedia