I know the trend of my blog posts fits nicely into the sojourn-of-a-music-artist category, but I find my mind cluttered with reflections of losing a savant of comedy and improvisation, Robin Williams.

I turn 46 in a few weeks and have witnessed an increased sense of recalling my past as I watch my son travel at light speed toward independence and his 18th birthday. Every parent knows from whence I speak regarding that stage before your child leaves the nest. It's bittersweet. Some days are heavy on the bitter side. Most days are sugary goodness. It catapults me into recalling my own youth most times.

I was in the 6th grade when I chose to adorn my body with a popular trending accessory that would let my peers at school know that I was into high fashion. I scarcely remember the exact cost, but something sticks out as maybe $2.99 from the local mall. I'm not sure if mom or my big sister took me to buy them, but I do recall a smile on both their faces as I fastened them to my pants and stretched them over my shoulders. I was becoming a disciple of my comic muse, Robin Williams, and his portrayal of the alien Mork on our family's favorite weekly show outside Happy Days and Laverne & Shirley. Mork from Ork taught me the importance of humor in all situations, plus the fashion genius of rainbow-colored suspenders. 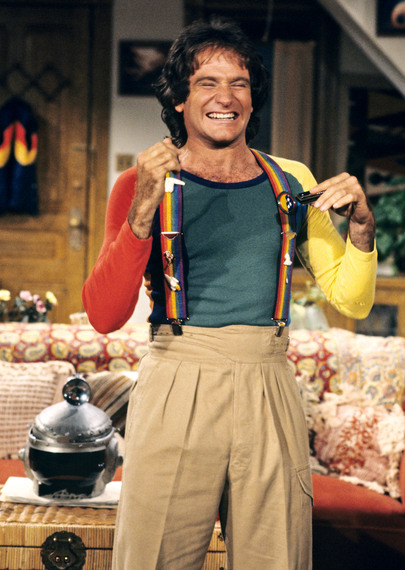 Looking back, I'm not sure that it was all that genius on my part, but knowing I was initially the only student in my school either bold enough or secure enough to wear them in public makes me smile to this day. The confidence I must have had to be the first one to debut them with my brown silk dress shirt and jeans says a lot about the power Mork exuded over me. I often greeted fellow students with the split finger greeting that was shared by Spock from Star Trek. I jested many one-liners stolen from select episodes with my best voice impression of a future legend in show business. Finally, I proudly displayed my Mork and Mindy button fastened directly on my rainbow suspenders in solidarity of support of the show that introduced me to improvisational brilliance.

When the first Facebook post showed up on my timeline of RIP ROBIN WILLIAMS, a part of my mind skipped like a vinyl record being scratched hard by a needle. I immediately searched the web for refutable evidence of a hoax. Not so.

I pulled my 17-year-old son in the room and shared the news. I witnessed his face turn pale with horror as well. His response echoed my own. Disbelief.

It's hard to find any one human outside of family who transcends generations with their impact on your grandparents, parents, children and grandchildren. While I hesitate to laud Robin Williams as an immortal god, I can honestly state his influence over my own child was remarkably strong. Spencer immediately began reflecting his childhood memories of the countless films he watched over and over again where Robin would bring joy and laughter to his life while building on his own imagination as a child.

The fact that Robin's personal demons influenced his choice to leave this life is both unimaginable and quite relatable at the same time. There have been multiple seasons of my own life where circumstances have been so perceivably dire that wanting to escape them by any means was a powerful idea. Yet there's irony in believing laughter is the cure-all to life's ills. Robin Williams not being able to sustain that idealism in his own life makes his death all the more surreal. We all hope that maintaining a genuine smile can be the evidence we can overcome any challenge in life. Certainly in my own family of three we practice laughter and improvisation daily, with a sense of urgency to one-up each other 'til our sides and cheek muscles hurt. It is the essence of knowing we can laugh each day that allows us to know our relationships are better than most in this world and have an underlying strength that will test time. It is our comfort and reminder that laughter is an expression of a thumbs-up trump card over any challenges we are facing.

I've long since lost those rainbow-colored suspenders. Somewhere along my life they were disposed of or sold at a family garage sale. I've since seen a few pair at costume shops and the occasional thrift shop. Each time I do, I reminisce back to 1978 and being the cool (or peculiar) kid who repped his comic hero's wardrobe while practicing my own form of improv in public settings. But then I fast forward to today and how I lament losing most of that zeal for improvisation that have been a trademark to my friends and family most of my life, to the strong noxious potion called trials in this life.

I've abandoned my norm of portraying an impromptu character in public, or using a bizarre voice while ordering at the drive thru. I've somehow forgotten my roots of reckless abandon and helping others smile and laugh. I still mentally possess a strong sense of humor, but I believe I've allowed the weight of life to overtake my ability to just let go and release my inner Mork.

I never met him, but I knew his genius. I've never been in a film or on a stand up comic stage, but I've known how to bring a room of family and friends to tears with laughter. I've struggled with depression at times and the pain of regret from personal choices like Robin, and I've maintained public appearances like him. I read the statements from his children this past week and see a similar truth about my own child in his intellect and sincere love for me and my wife. My list of comparatives is probably the same as many who respected Robin Williams. He was a remarkable public figure whose artistic gift grew roots in the lives of many the past 40 years in public.

In one episode of Mork and Mindy, his character shrank so small into the tablecloth in the dining room, that he entered another microbial universe. While the details thereon evade my mind, the premise of him being absent in this world, yet existing in another unseen place seems a fitting tribute to a man who taught me how to help those around me smile and laugh. He helped me pass along his brand of public amusement to my own child, who carries the torch proudly in his public life whenever he can.