Grassroots activism is the core of the environmental movement. Nowhere have I found that to be more evident than at Heartwood Forest Council gatherings. Last weekend, I attended the 22nd Annual Heartwood Forest Council in Northwest Pennsylvania, at which nearly 100 of the most passionate and dedicated activists gathered in the Allegheny National Forest next to the land of the Seneca Nation of Indians.

The three-day gathering, Become Your Place, Defend Your Self!, was filled with workshops, discussions, keynote speakers, field trips to oil and gas drilling sites in the Allegheny National Forest, late-night revelry at the campfire, live music, and the greatest local and organic vegetarian food prepared by chefs Shane McElwee and Mia Manion.

The first evening kicked off with a showing of Remembering the Removal -- a documentary by Caleb Abrams, a college student and member of the Seneca Nation of Indians -- depicting the forced relocation of nearly 700 Senecas who had to abandon their homes in the 1960s -- despite a 1794 treaty that had guaranteed them those lands in perpetuity -- because of the construction of the Kinzua Dam along the Allegheny River in Warren, Pa., that submerged more than 9,000 acres of of the Seneca's habitable land.

The next day I sat in on a workshop presented by Veronica Coptis and Melissa Troutman from Mountain Watershed Alliance. Mountain Watershed Alliance works to protect, preserve and restore the Indian Creek watershed and surrounding areas in southwestern Pennsylvania and is the home of the Youghiogheny Riverkeeper. The duo provided one of the most thorough and knowledgeable overviews on the impacts of hydraulic fracturing in Pennsylvania. This workshop covered it all, including the impacts of the construction of the drill sites; pipeline projects underway to transport this domestic energy overseas; massive water withdrawals from local watersheds used in the fracking process; contamination of groundwater from fracking well sites and fracking wastewater; the Marcellus Citizen Stewardship Project that offers basic training on monitoring shale development; increased air quality concerns from dust and diesel fuel emissions from excessive truck traffic, and details on the permitting process, how to file a complaint and how to track permits for proposed oil and gas drilling projects.

During the afternoon I talked with Nathan Johnson, staff attorney for the Buckeye Forest Council, about an Ohio bill that passed last year allowing hydraulic fracturing and clear-cutting in Ohio State Parks, and his newest concern that Ohio's only national forest, the Wayne National Forest, might soon be opened to shale gas drilling. He shared his outrage on the recent passage of Ohio SB 315, one of the worst fracking laws in the nation, allowing health and safety loopholes that put Ohioans at risk. He mentioned the upcoming Don't Frack Ohio rally on June 17 in Columbus, Ohio, and hopes there is a huge turnout.

Randy Francisco, an organizer for Sierra Club's Pennsylvania Beyond Coal Campaign and board member for Allegheny Defense Project and Center for Coalfield Justice, shared his concerns for the Allegheny National Forest where he spent much of his childhood hiking and camping. A couple of years ago, he did a solo hike in the Allegheny National Forest and was shocked to see how this public forest had been privatized by the oil and gas industry with wells scattered all over his favorite stomping grounds.

"It's clean energy and energy efficiency that is going to get us beyond all of these extractive fossil fuel industries," Francisco said.

On Sunday, Heartwood participants saw firsthand what Francisco meant by wells scattered all over the national forest. (To see what we found after spending several hours hiking in the Allegheny National Forest, check out the slideshow below.)

I got the chance to renew old friendship and catch up with old-time activists like Andy Mahler, founder of Heartwood, and Mike Roselle, founder of Climate Ground Zero and collaborator with Coal River Mountain Watch, who has spent the last four years fighting mountaintop removal coal mining in the Coal River Valley of southern West Virginia.

Dave Cooper, a Mountain Justice volunteer, continued the conversation on mountaintop removal and his work over the last eight years doing a roadshow to educate people about the devastating impacts this form of coal mining has on the Appalachian region. Cooper talked about the upcoming event Kentucky Rising on June 1 where people will occupy the Kentucky State Capitol to demand an end to corporate domination of our politics and to expose corporate toady Kentucky Gov. Steve Besher.

When I asked Bill Belitskus, board president of the Allegheny Defense Project, what is the biggest threat to the people and environment of Pennsylvania, he said:

"Unconventional hydrocarbon shale gas extraction is the single greatest catastrophe facing Pennsylvania since the turn of the century when the timber barons clear-cut our forested watersheds and the coal barons strip mined our lands for coal and gave us the legacy of acid mine drainage."

According to the natural gas industry, there are more than 350,000 conventional oil and gas wells that have been drilled in Pennsylvania. Belitskus expressed his deep concern over the onslaught of shale gas drilling where each drilling site can be as large as 20 acres, and according to Royal Dutch Shell, can use as much as 7.5 million gallons of consumptive water to frack just one Marcellus well. He said it is "consumptive use of water since once they are finished using the water it is so highly polluted and contaminated that it is a net loss to the watershed and can not be used again."

Laurie Barr, board member of Save our Streams PA who also helped me write the captions for the photos above, locates and promotes the plugging of Pennsylvania's abandoned oil and gas wells. She described the Scavenger Hunt PA where they train people to find abandoned wells, photograph them with the GPS location, and then ask the state government to recognize the hazards posed by these wells and provide the resources to plug them adequately.

Alex Lotorto from Occupy Well Street encouraged people to get involved in the campaign to Save Riverdale, a mobile home park where more than 30 families are being displaced by Aqua America, a company that plans to build a 3 million gallon per day water withdrawal site to service the natural gas industry.

The closing keynote was given by Tyler Heron, a Seneca Nation member who elaborated on the impacts of the Kinzua Dam on his people. Heron mentioned that before the Kinzua Dam his people could survive. They had dairy farms, grew their own vegetables, canned for the winter and made their own clothes. But now, after Kinzua Dam took their land away, he said, "we can live, but not survive. We are now just like you."

Click here for a link to Google Maps to get a sense of the elaborate roads and well sites throughout the Allegheny National Forest. The U.S. Forest Service has allowed the oil and gas industry to privatize our public lands. Click here for a map from SkyTruth that illustrates drilling in the Allegheny National Forest from January 2005 to October 2011.

Spear is the editor of EcoWatch.org.

Grassroots Activism: The Core of the Environmental Movement
Oil and Gas Drilling in the Allegheny National Forest 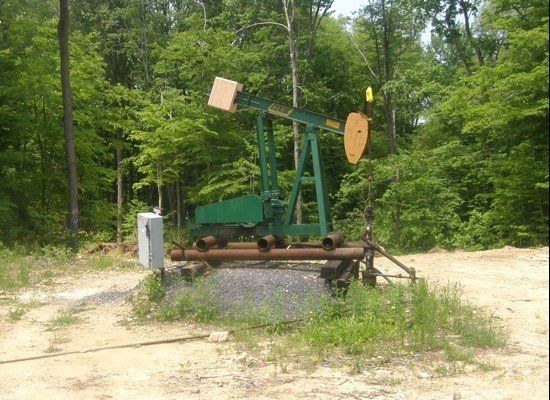