Since Secretary of State Hillary Clinton ended her African trip, the news cycle has seemingly abandoned the women of Congo--women who soldier on despite overwhelming odds that make staying alive a gauntlet rife with terrible odds. But lives continue to unfold, babies are born, mammas die, and hope burns with a fire that even the rainstorms which pummel the plastic dwellings at the Mugunga I displacement camp cannot extinguish. Secretary Clinton spoke eloquently about her experiences at Mugunga I and she is a powerful witness to the societal breakdown in eastern Congo.

The Mugunga Internally Displaced Persons Camp sits in a land of volcanoes and great lakes on the edge of Goma, a provincial capital in the eastern Congo. The camp is now home to 18,000 people seeking refuge from a cycle of violent conflict that has left 5.4 million dead since 1998. Chased from their homes and villages by armed rebels and informal militias, these men, women and children walked for miles with little food or water until they reached this relatively safe haven.

Now they live in tents, one next to the other, row after row, some clinging to life, others hanging on to whatever glimmer of hope remains in a region plagued by years of brutality. Many of these people have been robbed of their homes, possessions, families and, worst of all, their dignity.

Women and girls in particular have been victimized on an unimaginable scale, as sexual and gender-based violence has become a tactic of war and has reached epidemic proportions. Some 1,100 rapes are reported each month, with an average of 36 women and girls raped every day.

(I) met a woman who told me that she was eight months' pregnant when she was attacked. She was at home when a group of men broke in. They took her husband and two of their children and shot them in the front yard, before returning into the house to shoot her other two children. Then they beat and gang-raped her and left her for dead. But she wasn't dead. She fought for life and her neighbors managed to get her to the hospital - 85 kilometers away.

I came to Goma to send a clear message: The United States condemns these attacks and all those who commit them and abet them. They are crimes against humanity.

These acts don't just harm a single individual, or a single family, or village, or group. They shred the fabric that weaves us together as human beings. Such atrocities have no place in any society. This truly is humanity at its worst.

But there is reason to hope. We have seen survivors summon the courage to rebuild their lives and their communities. We have seen civic leaders and organizations come together to combat this appalling scourge. And we have seen health care workers sacrifice comfortable careers so they can treat the wounded.

The midwives who fight to preserve new life as babies struggle to enter the world in the Mugunga camps and in the villages are tired, but their courage overcomes discouragement. When we visited with them in January of this year, their requests were simple. "Do not forget us." "We have no means to feed our own families." "Some cloth for the babies would be nice." 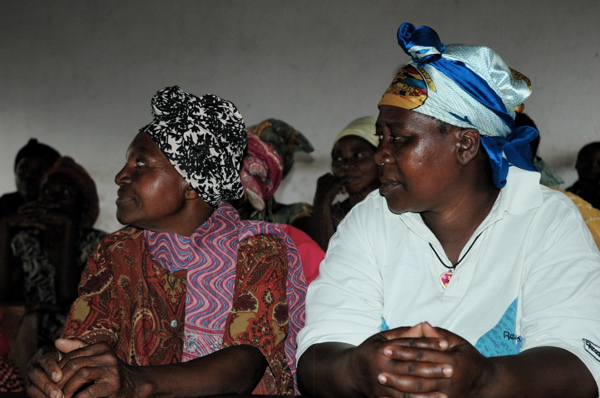 Image: Gathering of midwives in January 2009 to assess needs© Nienaber

Thanks to the efforts of Emmanuel De Merode, director of Virunga National Park, there is now hope and opportunity for the Association pour la Promotion de la Sage Femme (APROSAF) midwives. 118 wise women ("sage femme" means " wise woman") form the backbone of APROSAF, which was created in the wake of the 2002 Nyiragongo eruption order to help families made homeless by the devastating lava flow that buried Goma. These traditional midwives of APROSAF are considered community leaders. The respect they garner results from selfless dedication as they transport pregnant women and rape victims, sometimes by carrying them on their backs, to get help. They do this without pay and subject themselves to rape and shootings along the way.

These courageous women, who now fight overwhelming odds in the face of a total societal and moral breakdown, will receive a stipend of $20 US per month to establish a unique briquette business. The midwives will transform refuse into precious fuel, thereby saving not only the lives of women and children, but also protecting the severely endangered ecosystem of Virunga Park, home to the last remaining mountain gorillas. In addition, the women will receive $.50 for each bag of briquettes they sell.

The humanitarian crisis cannot be overstated. Since the start of new military operations against rebel armies in January 2009, more than 800,000 people have been forced to flee their homes in North and South Kivu, according to the United Nations. Another 250,000 have fled their homes in northern Congo. The UN estimates that the total number of internally displaced people throughout the DRC is over 2 million.

Due to the ongoing fighting in eastern DRC, massive relocation camps are now located on the perimeter of Virunga Park. Secretary Clinton visited one of these camps, Mugunga I. People need fuel to cook and to keep their children warm. Until De Merode's appointment after a series of environmental scandals, there had been an effort to keep the displaced from harvesting wood in Virunga. As a humanitarian gesture, and after being appointed as chief warden in August 2008, he removed the charcoal barrier at Kibati Camp. Prices in Goma dropped from 33 to 16 dollars a sack in the weeks that followed as a result of a massive increase in supply from the park, and considerable damage was inflicted on the ecosystem. If each midwife can sell 10 sacks of briquettes a month, it will replace more than 1000 sacks of charcoal that would have come from the trees of Virunga National Park.

The issue is access to energy for fuel and this represents a classic human/wildlife conflict. Energy infrastructure in eastern Congo is a non sequitur. There is no fuel supply in the displacement camps, and women are desperate for charcoal to provide the most rudimentary means of sterilization, cooking, and heat. The biggest threat to the mountain gorilla, beside war, is the rapid deforestation of their mountain habitat. When the old-growth forest goes, so follows the fate of the mountain giants.

In an interview in January De Merode said that he still believed "wildlife should not take priority over peoples' needs."

Sometimes it is a strong belief that leads to solutions, causing faith to transform into hope for the beleaguered and abandoned. DeMerode understands this conflict. 1.2 million humans are in as much danger as the gorillas. If one adds up the column inches both online and in print over the past three years, it is obvious that Western news reports have focused on the gorillas above all human concerns. We presented this conundrum to De Merode in January.

You are right in claiming that, by focusing on charcoal, we are neglecting some of the more pressing humanitarian needs. But we have to look ahead. Virunga's forests cannot last more than 5 years with the amount of charcoal that is coming out of the park. When the forests are gone, Goma will suffer a massive energy crisis, and that will quickly become a humanitarian catastrophe: domestic energy is key to people's survival. They need domestic energy for food and for their health.

Charcoal is incredibly destructive and inefficient. When people cut the tree they only use the branches because they don't have the tools to cut the trunk and it is a huge amount of waste. We have to find an alternative. It's a human priority as much as it is a priority for the wildlife.

No problem, no fight for the right path is without a moral compass, and righteous direction can lead to solutions to challenges that once seemed impossible to conquer. The US-based Legacy Foundation developed a process by which fuel is created from grass, sawdust and debris--thereby transforming waste and garbage into energy. 5000 presses will replace the charcoal demand of Goma, and create 30,000 sustainable jobs.

Besides the need for an income so that the APROSAF midwives can continue their courageous work of walking through the conflict areas to carry rape victims and dying pregnant women on their backs to get medical aid, the dream of the APROSAF midwives is to see the completion of a clinic building which will serve as a way station. Estimates are that they could save up to seven lives per day. The relatively paltry sum of $100,000 will accomplish this, but so far there have been no American foundations or individuals willing to entertain this life-saving project. 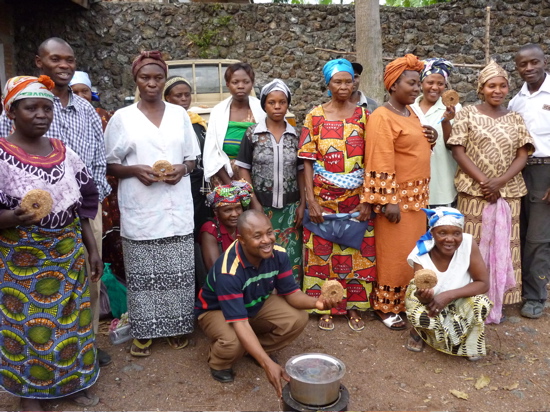 Despite having little money to work with in his own programs, DeMerode has indicated that he will be donating some additional funds to aid this project. Not nearly enough to fund the clinic program, but something that will generate even more hope for the brave midwives.

Secretary Clinton in indicated that she is willing to infuse up to $17 million into eastern DRC. One would hope that there is a spare $100,000 available. The APROSAF midwives have some hope now, due to the generosity of the officials of Virunga Park. But lives cannot be saved nor the future ensured through hope alone.

Clinton spoke to a group of Congolese at a roundtable discussion while in Goma. Clinton's words held concrete pledges of support.

We will try to provide the help that we're both asked for and that we think could be useful. But, ultimately, that help has to be received, changes have to be implemented, people have to be committed. And I hope that we're beginning to see that, here and in the region and internationally.

So, there is much to be done. I do not want to over promise. I am not just here to leave a business card, but I don't have a magic wand, either. But what I do pledge to you is that we will work. We will work hard. We will work with your government, we will work with groups like many of you represent. We will work with individuals, the private sector, and civil society, to try to help resolve the conflict and provide a better future.

But it is ultimately up to the people here. And I have seen so many examples of courage. I know the Congolese people do not lack in courage. And I know they do not lack in hard work or perseverance or survivorship.

Secretary Clinton did not have opportunity to meet with grassroots organizations such as the APROSAF midwives. Here is hoping that her staff will meet with them and others as they scope out opportunities for women of courage in Congo. APROSAF is community organizing in the best sense of the word. The midwives deserve attention and a drumbeat of support from the United States. How rewarding it would be to see immediate results on the ground in the form of babies suckling from breasts rich with milk, their mothers safe from the rapist, and cradled gently in the strong arms of the wise women midwives.

The midwives need the means to accomplish their noble goal of saving women through direct intervention, HIV/AIDS counseling, and nutrition. This is truly a grass-roots effort with a humble beginning that literally transforms grass and roots into life-supporting energy.

For a summary of the conflict in DRC please see this report from Human Rights Watch.