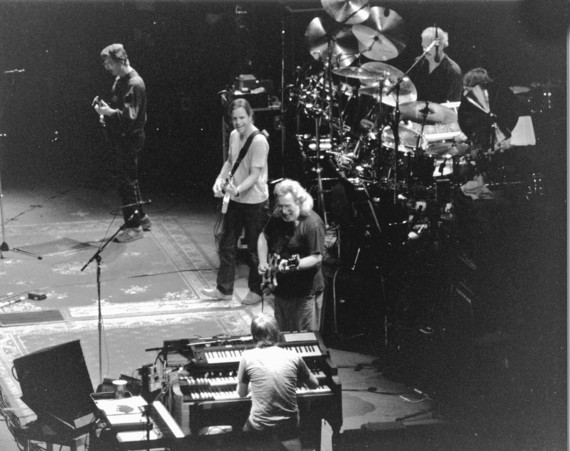 The Grateful Dead is a band whose influence transcends its brand of epic adventurous music and army of loyal fans known as Deadheads. Aside from their uniquely eclectic sounds and improvisational stage performances, the California band's imprint in music belies their laid-back '60s hippie image: from the Dead running their own independent record company during the '70s to employing the latest audio technology onstage. Since the death of co-founder Jerry Garcia in 1995, the other members of the Grateful Dead continued on with their own solo projects, while today's jam bands such as Widespread Panic and Phish are symbolic of the Dead's legacy.

To mark the 50th anniversary of the Grateful Dead, the surviving band members will perform together for the last time -- beginning on June 27-28 in Santa Clara, California, and ending in Chicago on July 3-5. This September will see the release of 30 Trips Around the Sun, an 80-CD collection containing 30 previously unreleased shows spanning the band's career.

Also coinciding with the milestone is a recently-published book, So Many Roads: The Life and Times of the Grateful Dead, by Rolling Stone contributing editor David Browne. In this edited interview, Browne talks about the Grateful Dead in terms of their music, shrewd business acumen, and cultural importance. 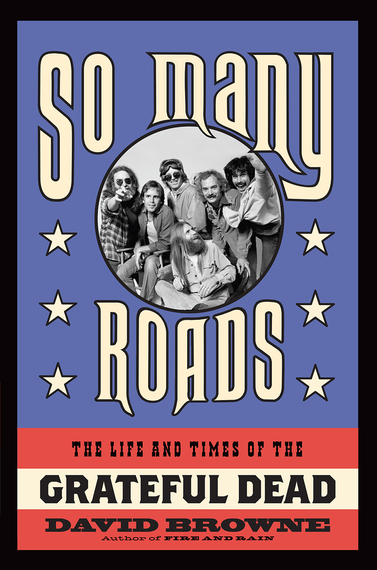 Book cover of So Many Roads: The Life and Times of the Grateful Dead, courtesy of Da Capo Press

There have been previous books about the Grateful Dead, including a few written by the surviving band members. What did you want to convey through So Many Roads?

What I've always tried to do with my books is approach them as if they were novels. I do all the research, reporting and interviewing, and then I tried to put it together as if it was a story with characters, scenes and settings. I thought that's something I could bring to this story that hasn't been done before, and treating their story in a very cinematic and also accessible way than some of the other books.

I think the Dead should be up there in the culture with the Beatles, the Stones, the Who, and all that. In some ways they are, but there's still that big air of illegitimacy about them. I think it's mostly the perceptions of their fans. I think [when] people think of the Dead, they don't think of their music. They think, "Oh, those twirling tie-dyed hippies," and they usually don't say that in a very complimentary way. I thought maybe it would be a way to tell the Dead story that would be accessible to outsiders who would then appreciate their story and their music.

In researching for and writing So Many Roads, what were some of the things that you learned about the Dead that you didn't know about previously?

You certainly learn what a bad-ass organization it was, from the road crew, and then even just the relationships between the band members. The public perception is that it is just a bunch of communal hippies and they're all smiling and hanging out together. And they had moments of that. But it was a pretty tough, hardened crowd.

I didn't quite realize in the early days of the band, those guys were butting heads. I had some sense of that from previous stories I done on them for Rolling Stone. But delving deeper into it and listening to that tape from that 1968 meeting where they sort of tried to fire Bob Weir and "Pigpen" [McKernan]... they were a band at that point for three years and they almost fell apart. You hear many stories of the road crew and the whole survival-of-the-fittest atmosphere that really got the best of people like [late keyboardists] Keith Godchaux and Brent Mydland, who had tried to keep up with that in a way. I think that was all pretty eye-opening.

Not only did the Dead inspire loyalty from their fans but also from those who worked for them, such as their road crew and office people. How did they do that?

You'll hear on one hand a lot of sniping amongst people -- people in the office will complain about someone here or there, and that person will complain about someone on the crew. And yet... they all would light up and say, "But it was so much fun working there." I think it was, in the sense that they were a self-contained little world. I think there was a sense of a tribe, "all in it together" atmosphere, kind of an "us against the world" thing that the band perpetuated. It was a singular workplace I guess is the best way to put that. 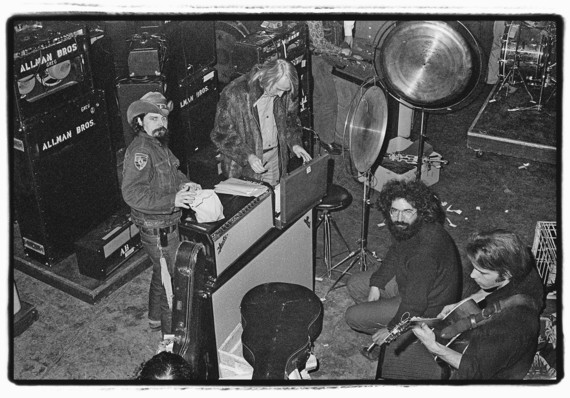 It's interesting that the Dead are one of the few rock bands that actually preferred touring over recording studio albums.

They didn't like performing in a studio without that audience. One of those guys said to me, "Without the feedback from the crowd, it didn't feel right being in the studio." It's interesting that they rarely outgrew that. They were constantly tinkering in the studio for a lot of their records. They liked to experiment, and maybe that was to their detriment sometimes, because you can spend forever working out an arrangement in a studio and you can drive yourself crazy. It's one thing to play a song differently night to night onstage, but to play it repeatedly in a studio -- it can really drive a band to distraction.

The mantra that I heard over and over again from people in the band [and] people in their crew was the band never made good albums... which I think is actually kind of ridiculous. Workingman's Dead, American Beauty, Aoxomoxoa -- they did make great music in the studio. But I think the experience of doing most of that was so unpleasant that it's colored some of the perception.

It's impossible not to separate the Dead from the drug culture they emerged from during the '60s. Did drugs play a factor in the band's music?

It drove their music, and later on it hampered their music. I think early on it definitely was seen as a creative tool. When they started, LSD and cocaine did not have bad associations with them the way they did later. They were seen as not just mind-altering substances but things that would also unlock your creativity and allow you to be free and to experiment mentally and creatively. Then of course later, especially with Jerry, it became a problem and it intruded on the music.

There's this dichotomy that surrounds the Dead. On one hand, they embodied the hippie spirit of the '60s. And on the other, the group was a very efficient, well-oiled business organization.

They kind of knew how to get what they wanted. When I was going through their archives, I came across this yellow legal pad -- handwritten notes from a meeting where they were complaining about [their record label] Warner Bros. They were complaining, "We should be getting more money from Warners," "They should be marketing us this way," "They shouldn't just be marketing us to the alternative crowd." It was really pointed criticism. And there was also a constant light-versus-dark atmosphere. They were constantly teetering between those two worlds. It must have been a very stressful situation to be in that organization, even though it had moments of fun. 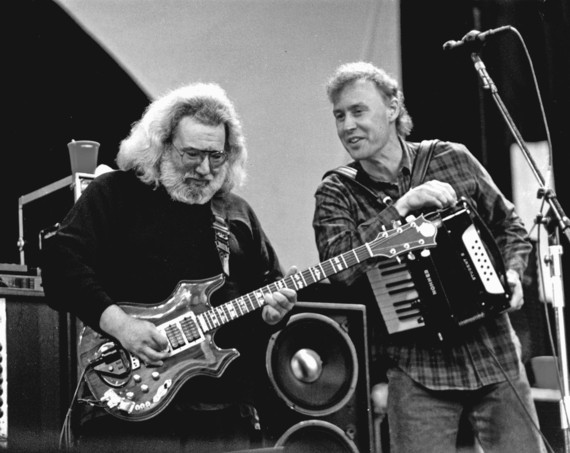 Your book documents in heartbreaking detail Jerry Garcia's drug and health problems leading up to his death, while the band had to deal with the machine of touring and unruly fans during the early to mid-'90s.

There is something so tragic about Jerry's decline. Even though people tried to stop it -- he tried to stop it intermittently -- it seemed like an unavoidable situation. I remember being so surprised when I watched this footage -- there was this interview he did just a few months before he died. When you watch that, he looks so old and worn down. There's still a lot of hand-wringing over "What we should have done to stop Jerry?" or "Should we have stopped touring for a year and let him rest?" There's still all this debate about what could have been done, but it's too late.

What do you hope people will come away from your take on the Dead's story?

It would be nice if it sent people back to their records or their concert recordings. I hope there's a greater appreciation for their legacy, everything from what really amounted to early social media... the way that they fostered that bond with their fans really was a blueprint for much of what followed in the industry. A greater appreciation of their cultural footprint, whether from that early social media aspect to even the way they pioneered technology on stage. They were really one of the first bands to say, "We want our concerts to sound really good." It would be nice if people came away thinking, "Oh, these weren't just a bunch of stoned hippies who couldn't write songs."

The Dead's story makes one appreciate works like Workingman's Dead and American Beauty from the early '70s, and even some of their later albums like Shakedown Street and Go to Heaven.

They had their own style and sound. And that's not to be underestimated. There was nothing generic about that band. For the most part, when you heard them, you knew it was them. They really did try to stay true to themselves for better and worse sometimes, but they did have a strong sense of themselves... and what they could get away with. It's very rare for bands to be like that anymore.

So Many Roads: The Life and Times of the Grateful Dead by David Browne, published by Da Capo Press, is now available in bookstores.