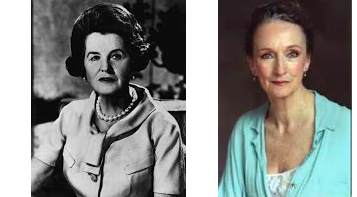 Rose Kennedy is the subject of the play "Rose," which ran at the Harold Clurman Theatre from Nov. 21 to Dec. 13, 2015 on 42nd St. in Manhattan. The one-woman drama, skillfully acted by Kathleen Chalfant, offers food for thought about the changes in politics and in our psyches within the last few decades.

The playwright, Lawrence Leamer, is also a historian-journalist and author of the 1994 best-seller The Kennedy Women, The Saga of an American Family, from which I've taken some information.

Born in 1890, Rose Fitzpatrick was raised the "lace curtain" of Boston where her father was mayor. In the face of her husband's infidelities, Rose's mother, Josie, focused on preserving the sanctity of the home. Years later, Rose replicated her mother's example as a staunchly Catholic wife to Joseph Kennedy.

Rose's father depended on the Catholic hierarchy for his political position. He forbade his daughter from attending Wellesley after the archbishop threatened his career if he allowed her to go to such a progressive college. Rose knew none of these behind-the-scene details and was devastated by her father's withdrawal of permission. (The play reveals the extent of her rage and inability to and forgive the father she dearly loved.)

Mirroring her mother, Rose projected a smiling face to the world. No matter what the circumstances, she had to appear upbeat, chipper, happy and insisted that her children follow her lead. Her faith taught her that motherhood was a sacred duty and she focused on rearing her nine and to a large extent, living through their accomplishments.

Rose unerringly followed the instructions of the eminent pediatrician of the day to the letter, Dr. L. Emmett Holt, who preached strict schedules, no cuddling, and no play.

Fortunately, child rearing practices have evolved to recognize the importance of flexibility and affection, and to encourage and nurture a child's individual talents.

What benefits parents and children alike too is that women today have many options beyond raising children and living through their offspring's achievements.

According to Leamer, Joseph Kennedy was not a great entrepreneur. His business tactics involved thriving on other people's disasters. "He was a brilliant loner, scavenger of other's disasters, driving stock prices down and then stepping in, making a killing, and stepping out again, buying land in Fla only after 1926 when the bubble had burst."

Today we respect couples of wealth and political power, like the Gateses, Clintons and Zuckerbergs, who work as a team and portion out a part of their fortune to benefit society and world-wide causes.

We expect our leaders to show human emotions, which is why many of us understood and sympathized with Vice President Joe Biden when he mourned the death of his beloved son Beau who perished from brain cancer a few months ago.

Conclusion: In brief, this is the season to be grateful and I am heartened by what I've learned in comparing the times of the Fitzgerald-Kennedys with today.

To acknowledge the tragedy as well as the triumphs of life, grants us a degree of freedom in the deepest aspects of ourselves. This level of psychic integration provides real strength compared to a façade of endurance.

Especially in light of the chaos and tumult we're experiencing, noting positive changes in our culture is important and uplifting.