Funerals are grave experiences. Grave digging competitions, not so much.

At least not in Trencin, Slovakia, where the Second Annual International Grave Digging Championships took place this week.

Eleven two-member teams from Slovakia, Poland and Hungary got down and dirty to see who could dig the best grave in the fastest time using only shovels and picks, according to the Guardian.

Speaking of picks, grave digging judges are pretty picky about what makes a good grave: It has to be 5 feet deep, 6.5 feet long and 3 feet wide.

The grave digging contest is meant to put the fun back into the funeral industry, according to event spokesman Christian Striz.

To prove he was less than dead serious, he dressed as the Grim Reaper for the corpse-free contest.

“This whole exhibition is about getting groups of funeral companies together,” he told the Associated Press. “It’s all about showing people how hard” the gravedigger’s job is.

But some competitors think the contest was more difficult for them than others.

“Gravel and stones — about 20-30 centimeters of it,” Gabriel Draffy, from the Krematorium Molnar in Nove Zamky, Slovakia, griped to AP. “The others didn’t have that!”

Slovakian brothers Ladislav and Csaba Skladan, aged 43 and 41 respectively, buried the competition by digging a perfect grave in 54 minutes, according to Reuters.

Their grave was also the neatest, judges noted.

“I am happy we won, it’s a satisfaction after 15 years in this job,” Csaba Skladan told Reuters.

“I had to focus on speed today but usually, when the weather is nice and I can chat with my brother, it’s a dream job,” added Ladislav Skladan. 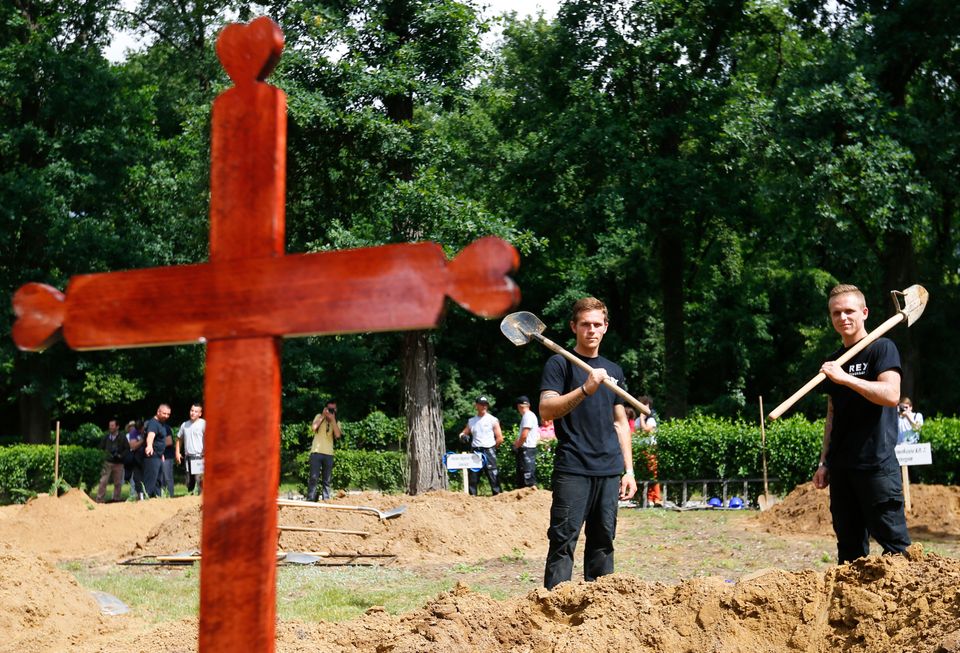 1 / 10
Taking their places at plots selected by pulling names out of a hard hat, 18 two-man teams waited for an official to shout "Start!" before shoveling at the ground to dig a precise, regulation-size grave as quickly as possible.
Laszlo Balogh / Reuters