The recent announcement of the detection of gravitational waves emitted from the merger of a binary black hole system is clearly one of the greatest scientific achievements of the last century. Indeed, it is further confirmation of Einstein's brilliance in proposing the General Theory of Relativity 100 years ago. The detection was achieved by the LIGO facility, a massive $600M+ NSF-funded set of ultra-sensitive detectors in two locations constructed for the sole purpose of detecting gravitational waves, and the announcement is being formally made to the scientific community in a paper published in the journal Physical Review Letters. The paper is authored by hundreds of scientists who have worked over the years on the LIGO project, and, for many of them, it is the fulfillment of their life's work.

Gravitational waves are, according to Einstein's theory, emitted any time an object with mass is accelerated, but for almost all cosmic events, the gravitational waves emitted are simply too weak to be detected. But in the merger of a binary black hole system, the mass of the black holes and the acceleration that they undergo during the merger are huge, and the gravitational waves emitted during this process are large enough to be detected millions of light years away, as occurred in the LIGO signal acquisition. So it is not surprising that the source of the LIGO signals was determined to be the merger of a binary black hole system.

If one attended the NSF webcast or read the press releases, however, one might think that gravitational waves were detected and then some numerical simulations were run that identified the source of the signals as the merger of a binary black hole system. This is technically true, but in fact the scientific contributions occurred in the reverse order. Let me explain:

The LIGO detection of gravitational waves is actually the first confirmation of the existence of binary black holes predicted years ago by astrophysicists at RIT. The signal detected by LIGO matches the numerical model of the waveform produced by RIT researchers and predicted in their 2005 breakthrough paper, "Accurate Evolutions of Orbiting Black-Hole Binaries without Excision,", by Campanelli, et al, and originally published in Physical Review Letters, on March 22, 2006. This paper, together with the other two breakthrough papers by Petorious and Baker et al., recently appeared in the American Physical Society’s curated collection of seminal papers celebrating 100 years of Einstein’s theory of general relativity and represent the culmination of of work and ideas from a multitude of researchers spanning the previous several decades. 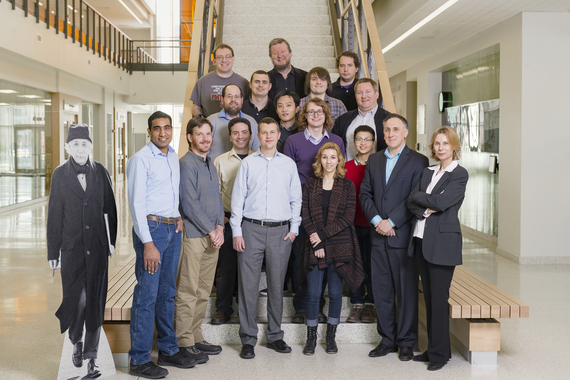 The team from Rochester Institute of Technology

Based on this milestone work from a decade ago, RIT researchers at the center, Carlos Lousto and James Healy, aided by significant visualization work by Hans-Peter Bischof, numerically modeled the merger of a pair of black holes and produced simulated gravitational waveforms. The actual wave patterns detected by the LIGO facility on Sept. 14, 2015, closely match the simulations created by Lousto and Healy. The detected signals, and the predicted gravitational waveforms produced by the RIT group are contained in the Physical Review paper announcing the LIGO detection.

The LIGO signals, therefore, confirmed the theoretical and simulated predictions of gravitational waves emitted from the merger of a binary black hole system performed by the RIT group over the past decade. In fact, absent these predicted waveforms, the origin of the signals detected by the LIGO team would likely remain a mystery.

In addition to these important theoretical and numerical contributions, six RIT researchers were part of the LIGO detection/data analysis team and are co-authors on the Physical Review Letters paper, including John Whelan, Richard O'Shaughnessy, Carlos Lousto, James Healy, Jake Lange, and Yuanhao Zhang.

So, as in the case of Einstein's General Theory of Relativity, theory and simulation preceded experimental confirmation, not the other way around. This is not intended to diminish the LIGO detection achievement in any way. The LIGO detection instrumentation represents the most sensitive set of detectors ever constructed, and I am in awe of the innovations that resulted in this amazing capability. Let's celebrate the theory, simulation, and experiment as one monumental achievement. That, I believe, is what scientific historians will conclude decades from now.