One of the telltale signs of aging is a graying mane. While the idea of gray roots is enough to send some women straight to the bottle (of L’Oreal, that is), a growing number have embraced this sign of getting older as part of who they are. The latter group are the focus of a photo exhibit called “SILVER: A State Of Mind” currently on display at the Buck Institute for Research on Aging in Novato, California.

Over the course of four years, photographer Vicki Topaz interviewed and captured 52 women (12 of whom are in the show) with various shades of gray tresses. Each woman spoke with Topaz about her decision to go gray and her relationship with aging. Topaz’s subjects exude a quiet confidence in each frame, in spite of the societal and personal stigma that can accompany graying.

“The stigma is that if you have gray hair then you’re old,” Topaz said. “[But some] women felt like, ‘This is the age that I am, this is the color of my hair, so why don’t I just go with that?’”

Topaz, 65, spoke to HuffPost/50 about her project, what graying can mean for women, and her own relationship with gray hair.

How long have you been a photographer?

I have been a photographer for going on 17 years. I worked in many other professions and I’d been around a lot of creative people in my life. As I was approaching 50, I felt like I wanted to explore my own creativity and I had studied photography when I was very young. I had always liked it, so I went back to school for it and I found that it was still really the vehicle that I wanted to use.

How did "SILVER" come about?

When I was approaching 60, I felt that I wanted to understand what other women were being challenged with as they were getting into this age.

A girlfriend and I had been talking about the idea. She has long silver hair and she’s had it for many, many years. Although my hair is silvering, I dye my hair. When we were talking about the idea, the initial idea was, 'wouldn’t it be cool to have a book of women with silver hair?' And I thought yes, that would be great, but I didn’t really know what the meat of that project would be. It was only after I interviewed the first two or three women and photographed them that I realized that the gray hair was the entry point into some really deep discussions around aging and what some of the challenges were, what some of the joys were as well. So it kind of turned into something more than I thought it might be originally.

What were the most common reasons women gave you about going gray?

Some were simply tired of dying their hair because of the expense and the time. Some felt that it would be very liberating and freeing to not worry about the color of their hair anymore. That was probably the predominant reason. And other women felt like, "This is the age that I am, this is the color of my hair, so why don’t I just go with that?"

The other interesting part too is that several among them have survived serious illness -- cancer for the most part. All lost their hair, their hair came back white, and they chose to keep it white because they really felt like it was a badge. It was a marker of something very important. It kind of symbolized a rebirth. They all felt that, "Ok, I survived this. So I must be here to do something important."

What has been your own experience with your hair?

My mother and my father both had very beautiful, silver white hair and neither of them ever dyed their hair. I always have. Even when I was younger and I didn’t have any gray hair, I’ve kind of kept a red tone to my natural brown color. I think the reason why I dye my hair is because it makes me feel more youthful. It was kind of interesting too with all the women because they all knew [I dye my hair]. And so I took some ribbing and there were some chuckles about it, but what it all came down to was choice. There was no judgment among them and I don’t find that among many women. It just comes down to what you choose to do and being happy with the choices that you make.

What are some of the stigmas you hear about gray hair?

For some people it’s really a serious concern in the workplace. The women I [interviewed] had colleagues who were very actively dying their hair, not so much because they wanted to but because hair that’s not gray can give you a 10-years-younger look. And in the workplace sometimes that’s what you need to stay competitive.

A lot of women tie their beauty to their hair. How does gray hair fit into these ideas of women’s beauty?

I’m looking at a quote right here that one woman said. She considers herself to be "crowned with a silver mane." And she wears it with great pride. I think all of them really love their hair. Several of them said though, “If I looked in the mirror and my hair was the yellowish color of gray, I’d be dyeing it in a minute.” None of them are saying there isn’t vanity involved; but these are women who are overall very comfortable with their age. With this particular group, they’re proud about where they are at, they’re proud about their choice. It’s not that they’ve been challenged with making the choice, but they’re embracing it. All of the men who’ve weighed in on this, [they] all 100% love the gray hair.

Why did they say they loved the gray hair?

Natural and sexy. And I think what’s behind that is that it’s confidence. A woman who’s letting her hair go gray has got a certain confidence that she can just be her natural self and that she’s making that decision. I think that for a lot of men, a woman who is confident about who she is and what her choices are is [related to] how sexual they are perceived [to be]. 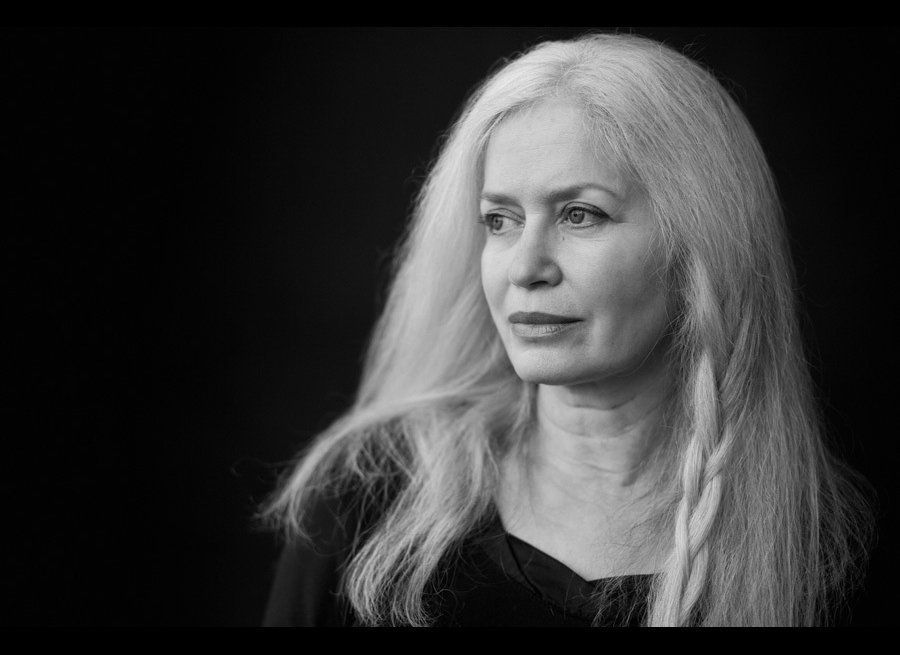 1 / 10
Amy Hempel
<strong>Writer, animal rights advocate, and co-founder of The Deja Foundation (b. 1951)</strong> "A wise friend told me that your fifties can be the time you discover what freedom means for you. And she was right."
Vicki Topaz