Oh yes, women like to be seen as regular angels in women's clothing but we know they can also be the cattiest of cats and bitches from hell. Just like MOTHER NATURE. She is the worst and the best because she's the boss. She's also an independent who doesn't negotiate with your idea(l) of beauty and age, she doesn't give a wrinkle about your whining about cellulite, deeply creased foreheads, turkey necks, flabby upper arms -- all of which are apparently in some quarters close to being a vicious crime.

When you're young and satin-skinned, Mother Nature is milder and stays in the background, giving you a pimple at worst. When you're older, she seems to harass you on a daily basis and push you more often towards the mirror than is good for you -- sometimes with withering results. Back off, Bitch!

So we have two options here.
1. Trying to fight that tough tyrant with all you've got, meaning Botox, fillers, implants and worse -- and pretty much lose the game (I think).

2. Finally make peace with the way you look, become her Bestie and walk off together into the sunset! All of which comes with benefits like self-love and peace of mind! Sounds like a good deal. I personally live by it.

So imagine my shock, when some eagle-eyed woman on some social media platform saw my face and my age (69) and got real angry. The nerve I had to show that fake-face of mine! To her I was like an artificially enhanced creature, tottering out of Dr. Beautypuss' clinic! Not even good genes, a healthy diet, yoga, running, swimming, special creams etc. could make me into the person in the photo, as if that wasn't obvious, she insisted. Women sniff out dirty secrets like badgers and don't let you get away with anything, do they?

Except, the point is here: NO, I don't have Botox and fillers in or on me whatsoever, I swear by that incorruptible Mother Nature! But the bitchy Botox-accuser wasn't having any of it. She claimed she was in the beauty business and knew what's real! I have to say that she touched more my funny bone than my self-esteem. I had to laugh real hard. So it's not humanly possible to look naturally good and don't fill the mandatory wrinkle-count "for my age"? So it's Botox or bust? It's envy, cattiness and backstabbing all over again in the age of newly re-shaped feminism? How disappointing.

That wasn't the only complaint. I'm not only a cheat, even worse, I make other women feel bad, she accused. So now I was guilty, too, and therefore also expected to disappear out of consideration for the "poor" other women? What an insult to all the millions of very good and very youthful looking women who seem to be fine with other good-looking women around!

On one hand we are encouraged to counter society's and (most) men's cruel demand for eternal beauty with self-confidence and grit. But if we do -- and look and feel good -- the Bitch-Brigade tells you to take it down a notch and crawl back into the shadowy land of self-abnegation and invisibility? Come on! Can we really not escape the female trap of comparing each other and be instead inspired by any age and any looks?

There is one way out of this beauty race, though. Mother Nature is no fool and she can't be bought, but she does one deal with us all because she's also a bit of a mentor when she's in the mood.

This is the deal:

Stop thinking that age is a battle instead of a trip, and stop kidding yourself that it can be won with any artificial weapons. It can't. Mother Nature will see to it! You will lose, we all will. So, instead, step out of the ring, off with the gloves, change the game and start a new one with a human concept where everybody has a chance. I think it's simple because the real beauty boosters are 100 percent organic: Courage, honesty, compassion, a critical mind, independence, generosity, warmth and wit. So don't fill your wrinkles, fill your soul.

And if you happen to have also great cheekbones, or fantastic teeth, or gorgeous hair, or sparkling green or blue or gray eyes -- well, great, too. Any which way -- Mother Nature will love, applaud and support you! And so will all the millions of interesting women without a shred of envy and ill will. By the way: Joni Mitchell has a great song, called "Happiness is the Best Face-Lift". Mother Nature, that imperial powerhouse, and yes, Bitch, agrees. So can we.
https://www.youtube.com/watch?v=euAZOx-bs3A 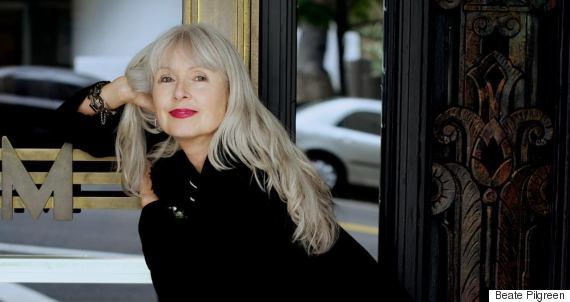 GRAY IN L.A.: Mother Nature -- The Bitch Is Back! Don't Fight Her!
8 Foods For Healthy Skin