My passport is like the blood-sucking, voracious plant from Little Shop Of Horrors -- the more I feed it, the hungrier it gets.

Last year, my 103-year-old grandmother "Grandma Betty" and I were slurping down cones of melting pistachio ice cream under the North Carolina sun, when she pointed to a patch of trees.

"Do you see those leaves?" She asked.

There were about 8 bajillion leaves, none remarkable enough for me to halt my losing battle against ice cream soup.

"When the wind blows, it's odd, they don't all move in the same direction. They go every which way."

I squinted at the leaves. A gust swept through and, lo and behold, each leaf finger jolted in its own anarchic direction.

Grandma Betty meditates, notices leaf movements, and introduced us to the funny-sounding word "yoga" decades ago, while my immediate family buys Post-it notepads labeled "Stop And Smell The Stupid Roses."

When I bragged to my grandmother about my extensive travel plans, she giggled with delight, but then sighed, "Honey, when will you ever have the time to breathe?"

She was born in New York City back when my office building was Wanamaker's Department Store and it was unremarkable to have rocks thrown through her Jewish parents' storefront. She moved to Hollywood at a time when streetcars rumbled through my former neighborhood instead of SUVs. Grandma Betty has spent the 52 years since my grandfather died raising three boys on her own, putting herself through speech therapy school, becoming an award-winning artist, and is currently studying neuroanatomy. And she still somehow takes time to breathe.

When my family visits her, we load up on 3 grande frappu-/cappu-/mocha-ccinos and one quad espresso at Starbucks, screech up to her apartment, sprint through the halls (we are Running With Hot Drinks masters), and take a final mouth-burning swig before hiding the excessive caffeine evidence behind our backs and jamming our cellphones into our pockets. We calmly enter her apartment, forcing our racing hearts and sweating palms to chill the heck out, because Grandma Betty will inevitably ask, "Why are you so rushed? Slow down and breathe."

I struggle to describe my surroundings when I write my grandmother postcards. I race between cities, checking off "Must See" lists, snapping photos and feeding my gluttonous passport, but I forget to stop and smell the stupid roses. I don't watch which direction the leaves blow.

In one of my holy-crap-if-I-don't-go-now-I-never-will freakouts, I recently rushed off from Melbourne, Australia to the Great Barrier Reef for a weekend. 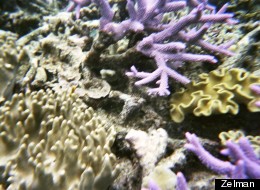 I did not take good photos. You can click here to see some nice photos that are not mine.

Mere inches below the patchy turquoise sea's surface, a new world unfolded before the mask suctioning skin off my face. I was a tourist stumbling upon the Paris of the ocean.

There were corals carved with mazes shaped like brains, the ocean a serial killer-style vat of noggins.

Some corals crinkled inwards like scrunched up burlap bags, while others sloped into pointed mounds shellacked with the 1998 Crayola crayon color "Banana Mania."

I swam over graveyards of white, broken coral limbs, then approached swaying corals, dozens of thin fingers waving to me, each one going its own direction. Was I actually noticing something? My next postcard to Grandma Betty would read "Guess what I observed today!" instead of "Guess what I did today!"

The crackle of fish snacking on coral echoed across the expanse.

Fat royal blue starfish lazily drooped their arms over rocks. Neon purple "worms" with spindly arms snapped open and shut. A pencil-thin fish with eyes as wide as its body darted through.

A giant clam gaped its mouth so wide that I wondered if I could fit inside of its shell. I was sad the clam was stuck in that one place forever, but maybe I shouldn't have been. It had deep roots and a rich community in its homeland.

One lonely fish splayed with yellow stripes and a black spike off its head sullenly swayed through. I doubt it knew how beautiful it was.

Schools of basketball-sized fish momentarily blackened the ocean. A sparkly rainbow fish knocked its face into a smaller fish, then bullied a second creature when the first one ignored it.

A shark glided past me. No other fish minded, no "Jaws" music screeched, and the creature seemed unaware that its species was a Hollywood horror darling. 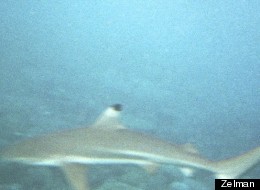 As Western Australia kills sharks through its culling program, a marine biologist warned me that removing an apex predator can damage a food chain all the way down to the coral.

A jellyfish flapped by with a center folded like a rose and thick rings for gonads. It felt rather inappropriate to stare, but the only jellyfish I'd seen before lived a seemingly dismal existence in a Los Angeles restaurant's aquarium tank.

When I did turn, a wall of jellyfish encircled me. My mask-suctioned eyeballs adjusted to witness hundreds lining the water, like glistening blobs of strawberry tapioca balls in a sea of Bubble Tea. All flapping and curling, flapping and curling. One flapped its gelatinous body against my face and I let out a muffled shriek through my mouthpiece.

A ray of sun broke through the water's surface to reveal scratches on some of them, silver lightning bolts running down their sides. The prettiest of all were the ones that bore scars. World-weary and more beautiful for it.

I gently lifted my arms above my head and squirmed through the slippery wall. I reached a sea turtle as long as my torso, casually suspended in the water, popping its head up once for a gulp of air. I silently floated by its side. It occasionally pawed its flippers through the still water.

There we were, just a hundred jellyfish, a turtle and me. I pawed my arms through the water alongside the turtle, and felt I belonged.

The turtle opened its jaw and chomped down on a jellyfish. I was horrified.

It chewed once, twice, and then spit gooey remains out. Then it flapped its formerly awesome flippers to reach a second jellyfish, gnawed and spit again. I wanted to intervene, save the jellyfish! But I did not, in fact, belong in this world. I was a mere tourist.

Another ray of sun slipped through the water reminding me of the waiting world above, but I oddly found myself with nowhere I wanted to run off to.

When I returned for my first night scuba dive, the sky was black and underwater was a deep gray. I was biting so hard down on my scuba tank's mouthpiece that the plastic flavor numbed my tongue.

I forgot everything I learned about diving as soon as I entered the water. I actually forgot every single piece of information I ever learned in my last 28 years of life.

My instructor removed a weight from the belt around my waist. The belt seemed to be a mafia-style drowning weapon and my scuba set was so heavy on land that when I placed it on, I stumbled backwards into the row of tanks.

Silent underwater, the instructor hand mimed to ask my status. I was freaked out, but I gave him a thumbs up. His eyes bugged out with concern. I forgot that a thumbs up means "End the dive!" I shook my head, and gave the okay sign.

As we dove deeper, the grey darkened, our flashlights revealed just flecks of white stillness, my head spun and bubbles no longer emerged from my mouth because I'd stopped breathing. I blinked, trying to remember what to do.

"Just breathe," my instructor had first taught us. "Never forget to breathe."

I was getting dizzy, thinking I had to surface or I'd pass out and drown with all the weights and I forgot the instructor's name, realized I couldn't scream it underwater anyways, so I flailed my arms having already forgotten the hand signal for "get me the heck out of here" to no avail and I found myself with few options, no options, actually, but to breathe. I inhaled sharply, an awakening-from-a-nightmare gasp -- there it was, air. I clamped my hands over my mouthpiece and took another breath.

I could breathe again, and as I glided between the walls of the reef, it was as if I was a bird soaring through a humid night sky, flying between mountains and caverns.

There was a turtle floating asleep midair, maybe my jellyfish-munching one, and a twitchy fish with a bout of insomnia, and a moray eel larger than me with pointy teeth bared.

Back on the surface, I yanked off my mask and stared at the night sky. A creature soared above, and I thought it was a fish until I remembered what level of earth we were on.

I suspect I'll remember my few moments in the underwater village more than I remember years that I spend in some cities. Perhaps it is not the length of time, but the quality. I only see Grandma Betty twice a year now, but without my caffeine and tech distractions I can see her -- the "oh!" in her laughter, the blossom of her cheekbones when she smiles, the hum in her voice when she whispers "breeeathe" -- with greater clarity than people I spend every frantic day with.

I have found no balance yet between fulfilling my desires to both see all the world's wonders and actually soak some of them in, though I am fortunate to have either opportunity. I am still bewildered that there is an entire world below my feet that I have been missing out on as an earth-walker. But I slowed down in the Great Barrier Reef.

As dredging sludge is dumped in the waters and climate change looms, I hope my future grandchildren will have the chance to witness one of the world's most fragile ecosystems. If they do, it would be nice if they remember to slow down and breathe (through a mouthpiece).

"Oh yes, the mountains are beautiful. But for me... for me, give me the sea."
-Grandma Betty