I sat down with actor Demian Bichir during the final months of 2008, when he was appearing in "The Waters of Babylon" at the Geffen Playhouse. Since then, Bichir has become a recognizable face north of the U.S.-Mexico border following his lauded turn in 2011's indie hit "A Better Life," for which he was tapped with a Best Actor Oscar nomination.

DEMIAN BICHIR DRINKS FROM THE WATERS OF BABYLON, FIGHTS A REVOLUTION WITH CHE AND TAKES A WALK IN THE WEEDS

A native of Mexico City, actor Demian Bichir is currently batting a triple with two high-profile supporting roles on the big and small screen, as well as the male lead (co-starring with Shannon Cochran) in Robert Schenkkan's play By the Waters of Babylon, which is currently onstage at The Geffen Playhouse. Prior to trotting the boards in Westwood, Demian wrapped Steven Soderbergh's back-to-back films on Cuban Revolution icon Ernesto "Che" Guevara: Guerilla and The Argentine (later retitled to the simpler Che), playing the pivotal role of Fidel Castro, and debuted on the Showtime hit series Weeds, playing the wily and charismatic Mayor of Tijuana, Mexico: the new love interest to series star Mary-Louise Parker.

The second of three sons born to renowned theater director Alejandro Bichir and actress Mariacruz Najera, Demian and his brothers Odiseo and Bruno are three of Mexico's most renowned performers, so much so, in fact, that one year at Mexico's MTV Movie Awards, there was a special category called "Best Bichir in a Movie," which Demian won. A veteran of stage, screen and television in Latin America, Demian Bichir's star has arrived on American shores with a vengeance. He sat down recently at The Geffen to reflect on his life as a performer.

Let's start out with Che. You spent five months working on it.

Demian Bichir: I was lucky enough to get the offer when I had enough time to work on it. I dove into the character, the process and research of it. Plus, growing up in Mexico, we are very close to the event of the Cuban Revolution, because it was planned in Mexico City. I already knew many, many things about it. I read Castro's spoken-word autobiography, called One Hundred Hours with Fidel (U.S. title: Fidel Castro: My Life), which is a series of interviews he did with Ignacio Ramonet, who's a famous journalist. I also got a lot of DVDs, many from Havana, where I was able to study footage of Fidel, which was very helpful.

Tell us about Fidel. What was your take on him?

Well, when I put myself on tape for the audition, I remember thinking that there were so many great characters involved in the Revolution; I knew I just had to play one of them. I didn't have my heart set on playing Fidel, to be honest, and didn't even really think of him. Then I got the call at five in the morning that Steven wanted me to play Fidel! I was like 'What...?' (laughs) I looked at myself in the mirror and thought 'What the fuck is wrong with this guy? Me, as Fidel?!' Then I started to see Fidel in my own face, and I thought 'My God, Soderbergh is a genius, because he saw Fidel in me before I did!' Then by the time I'd started working on it, and really getting into the character, people would stop and ask me for pictures! I was having breakfast at the Urth Café one morning, and this guy kept looking at me, and he asked "Do you mind if I take a picture with you? My grandfather is Cuban, and you look a lot like the young Fidel Castro." There was another time where I was picking up my girlfriend at the airport, and there was an orange alert on, at the time. I had my beard fully-grown out by then, and they pulled me over and asked to look in my trunk. So I said 'Sure,' and got out and opened my trunk. And one of the cops said to me "What's with the Fidel Castro look?" And I said 'Well, I'm glad you asked.' He said "Why is that?" And I said 'Because I am Fidel.' (laughs) And he gave me his "don't fuck with me" face, and I said 'Yeah, I'm doing the film with Steven Soderbergh, and Benicio Del Toro is playing Che...' Then they were like "Really? Really? Hey Bobby, Richard, come over here! This guy is playing Fidel in the new movie!" (laughs)

You managed to get Fidel's voice down, his mannerisms, and his Cuban accent. Was all that difficult?

Yes, that was all a big challenge, which is what drew me to the part to begin with. As soon as I don't know what to do with a character, that's when I say 'yes' to it. When on paper it's really difficult, and I have questions, then I know it's going to be a nice journey, a nice trip, especially if you're with the right people.

How were Benicio and Soderbergh to work with?

They both are where they are in their careers because they're great, just the absolute top in terms of their talent and commitment to their work. They're both extremely clever and Steven actually held a boot camp for us prior to filming, which helped us all get into character: sleeping outdoors, living like the rebels did in the Sierra Maestra. Benicio is so funny, and such a real human being. So often you meet stars that you admire and they disappoint you, but with Benicio it was just the opposite. He got into character and pretty soon was commanding the whole boot camp.

You come from a theatrical family in Mexico City.

My parents met when they were studying theater in a small town in northern Mexico called Torreon. They traveled to Mexico City without knowing anybody, and my father became a theater director and my mother an actress. Both my brothers are actors, as well. So it was in the blood from day one. (laughs) My parents had a theater company that would perform shows in every plaza in Mexico City. And we were always there, backstage, trying on the fake mustaches and driving everyone crazy! One day, the actors locked us up in a back room because we were such a nuisance. It was a real revelation for us when we figured out that our parents were making a living playing make-believe just like we did. Pretty soon, we all started doing professional theater when we were kids. When I got a little older, I wanted to play soccer professionally, and one night, my soccer coach came to see me in a play when I was about 14. And my coach was very impressed, apparently. At our next soccer practice, my coach took me aside and said "Listen, I had a great time last night. You were really amazing and fantastic. Do you know who Pele was?" And I said of course I knew who he was. My coach said "Do you know how he started playing soccer? He kicked coconuts around barefoot on the beach, because he didn't have money for a soccer ball. He didn't have any other choice, and you, you are a great actor." (laughs) So that was a very nice way of telling me that my talents lay elsewhere than the soccer field! That was it: from then on I was an actor.

It's interesting that you go from playing Castro to a victim of his regime in By the Waters of Babylon.

(laughs) Yeah, this play is really very poetic, in many ways. That's why I love it. The characters are really well-written and (my character) Arturo has this duality and ambivalence that most Cubans feel and live with. There are so many Cubans in the world that have these amazing stories to be told, and Arturo's is just one of them. I have many good friends who are writers that had to leave Cuba, and the story that Arturo tells is so heartbreaking and moving and special, and really hit close to home for me after hearing what so many of my friends went through, so that's what really drew me to the character. 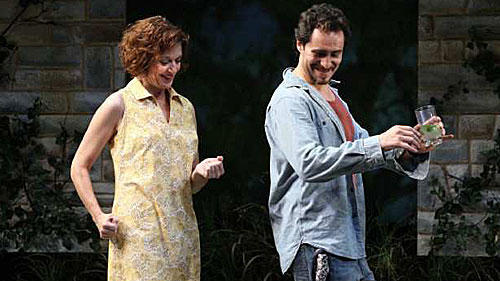 By the Waters of Babylon, with Shannon Cochran.

You and Shannon Cochran had to go to some very intimate emotional and physical places. I've always heard that love scenes are very difficult for actors.

Oh, absolutely, very difficult, especially if you don't really know the other actor all that well. Most of the films I've done have involved some sort of nudity in the love scenes, but I've known most of those actresses prior to that time. It was much harder recently with Mary-Louise Parker in Weeds because the scene we did was filmed just a few days after we'd met. It was really intimidating for me because she's such a great actor and so beautiful that...well, you don't want to mess it up, you know? (laughs) So yes, it can be very tough, but that's what they pay you for, is the hard stuff.

Bichir and Mary-Louise Parker in
Weeds
.

Your character in Weeds is very interesting because he's morally ambiguous and quite pragmatic: he's forced to tread in some dark areas in order to get good things done for his people.

Yes, and that's what I find fascinating about him and the characters on that show: they're very real. It's all about the gray, because none of us are black and white. We can all be angels or demons, or both.

What category does your take on Castro fall into?

I think the big difference between a dictator and a leader is what you do or don't do for your people. All of Fidel's tasks and goals were always aimed at helping his people. That's my perception, and when you think about Fidel's actions and words, they were always aimed at helping his people. He knew that many things had to change in order to make things more equal. It made me think of our own revolution that we had in Mexico a hundred years ago, for the same reasons. It seems that now we need a revolution again in Mexico, because things have not been equal there for far too long.