The Great Gatsby is set on Long Island -- what Fitzgerald called that "slender riotous island" -- and Manhattan. What Fitzgerald the writer much admired, Henry James, called "the long, shrill city." But don't look in either place for the "real houses" in which Jay Gatsby, and Daisy and Tom Buchanan lived. Start earlier in Fitzgerald's life, and think of something on a smaller scale, but almost unutterably grand to a Princeton freshman wanting badly to belong.

In March 1915, Scott Fitzgerald's Princeton social career was set when he became a member of University Cottage Club, one of Princeton's selective "eating clubs." In This Side of Paradise (1920), he described Cottage as "an impressive melange of brilliant adventurers and well-dressed philanderers." Located on Prospect Avenue, Cottage was a magnificent new McKim, Mead & White building in 1915, designed by Charles McKim himself. Cottage's main claim to fame was its second-floor library, a scaled-down replica of the library of Merton College, Oxford.

Next door to Cottage was the Ivy Club, their main social competitors in Fitzgerald's day. Ivy's building is also impressive, with its dark brick and tower to one side. Hobey Baker, Princeton's most celebrated athletic star in Fitzgerald's day, was Ivy's a golden boy. He graduated in 1914 and went immediately to serve in World War I. Baker would die in the air over France in 1918, after the Armistice, with his orders home in his pocket -- an event that had significant repercussions among the young men who had been at college with him, including Fitzgerald, who gave Baker's middle name, Amory, to his hero in This Side of Paradise.

Here's the description of Gatsby's house from The Great Gatsby: "It was a factual imitation of some Hotel de Ville in Normandy, with a tower on one side, spanking new under a thin beard of raw ivy..." Though older than Cottage, Ivy's club building was still relatively new when Fitzgerald was an undergraduate, and the ivy climbing up its walls still thin. As to a tower, there are plenty of those on the Princeton campus, but in Fitzgerald's day Ivy's main hall was to the left-hand side of the building, closest to Cottage, and with its chimneys stood well above the rest of the building. 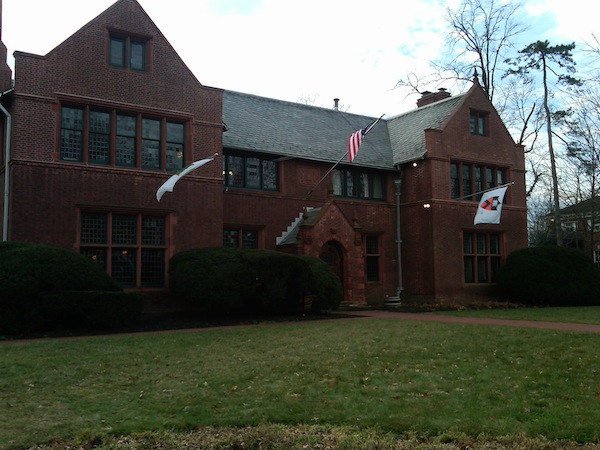 And here, the description of the Buchanans' home:

Their house was even more elaborate than I expected, a cheerful red-and-white Georgian Colonial mansion, overlooking the bay. The lawn started at the beach and ran toward the front door for a quarter of a mile, jumping over sun-dials and brick walls and burning gardens -- finally when it reached the house drifting up its side in bright vines as though from the momentum of its run. The front was broken by a line of French windows, glowing now with reflected gold and wide open to the warm windy afternoon...

Cottage Club has been set down on the Long Island shore. Its cheerful red-and-white Georgian Colonial design, and its famous back gardens (complete with brickwork, sundial, and fountain) remain today. Cottage boasts a long row of French windows facing the gardens, but they're on the back of the building, not on the Prospect Avenue side, and can be seen only by members and guests. 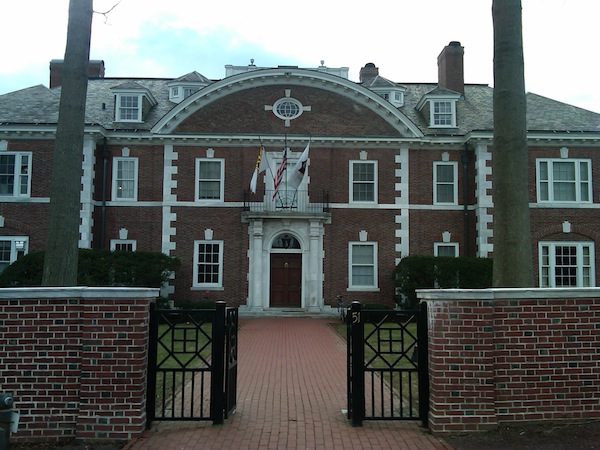 Fitzgerald wasn't about to give Daisy and Tom Cottage Club's celebrated library, though. He transplanted the Merton College library replica to Gatsby's house. At the party in Chapter III, we find the owl-eyed man marveling over the books; in Chapter V, during Daisy's tour of the house, Nick observes, "As Gatsby closed the door of the 'Merton College Library,' I could have sworn I heard the owl-eyed man break into ghostly laughter.'"

Princeton, and Princeton's campus buildings themselves, matter more in Fitzgerald's non-collegiate fictions than critics have noted. The influence of the place didn't end with This Side of Paradise. Its echoes in Gatsby are physical and profound.