America is a land of immigrants. Their extraordinary journeys and accomplishments strengthen our democracy and help the nation progress in countless ways. And their powerful stories enrich our society.

Every July 4th since 2006, Carnegie Corporation of New York has celebrated the contributions of immigrants with a public-service ad─Immigrants: The Pride of America ─ in The New York Times, featuring outstanding naturalized citizens from all over the world. This year, a companion website was launched, with honorees from 2013 and previous years. The site also has a timeline that traces Andrew Carnegie's remarkable immigrant journey.

Everyone has stories of great immigrants, and we invite you to share your own stories on the website about how you or your family came to America, including your achievements and what being part of this country means to you. To inspire you, here are three wonderful stories from people featured in this year's ad:

I grew up in America's most Cuban city - Hialeah, Florida. The municipality's tagline, "The City of Progress," far more often was quoted in Spanish. The cheering section at local football games brought conga drums. The Catholic saint statues that often adorned front lawns concealed Afro-Cuban alter egos. And the "fries" at fast-food drive-thru joints were made of yuca.

But the city was fiercely American, just as my parents were fiercely American. Having fled Cuba shortly after its Communist regime took hold of the island, they brought me to Florida when I was 10 months old and raised me to cherish the American dream. Cuba lingered only in the flavor notes of my mother's cooking, the rhythms on our stereo, and the bottomless sense of yearning for loved ones stranded on the island. The rest of it was all-American: The stray threads I pulled off my mother's clothes when she returned each night after a grueling day at her clothing factory job. The snazzy ties my dad wore to work as a car salesman. His religious attention to Election Day, when he'd leap out of bed to cast his vote. The pride I sensed in my parents after I brought home the miniature trophy that declared me the winner of the first grade spelling bee, in the year I learned to speak English.

I could say it was by magic that a loving and supportive community emerged around our family. But that village force of good neighbors, church friends, American-born school teachers who took the initiative to visit our home and offer a word of praise and encouragement - that doesn't happen by magic. It happens in response to a life embraced, a life that is often turbulent, painful and imperfect. This is what I learned from my mother, may she rest in peace. This is what I continue to learn from my father. At 84, he is stricken with Parkinson's. Last Election Day, I sat with him at the polling place and, at his direction, filled out the ballot. I watched as he slipped the ballot into the box and gave the poll worker a smile of great accomplishment. It's an image I'll carry with me always.

My Cuba is now buried in a Miami cemetery. But my America resounds in all its glory, like a hundred conga drums playing beneath Friday night lights in Hialeah.

I was born in Bulgaria and grew up there while Bulgaria was one of the communist satellites of the Soviet Union. I was fortunate to have been able to leave communist Bulgaria and after living in Beirut, Lebanon, for a period of two years, arrived in New York in 1961 as a Cold War refugee. In September of the same year, 1961, I was accepted as a freshman at Columbia University with a full scholarship.

After graduating with a master's of science in nuclear engineering, I joined a few college friends in a start-up company. Syncsort was one of the first software companies, and I was its CEO from 1975 until 2008. I view the success of Syncsort, and the opportunity that I had to be involved in the start-up of not only a new company but a new industry as well, as a tribute to the dynamism and opportunities in the United States. In expanding and developing Syncsort's business internationally, I have come to appreciate the fact that there is no other place in the world where an immigrant has the kind of opportunities that one has here. The term "land of opportunities" is not an empty phrase for the U.S.

While still at Syncsort, I formed the Tavitian Foundation, which has funded educational opportunities for more than 250 talented young individuals in various fields as well as assisted in various art projects. The philanthropic culture of our country, leading to the sense of satisfaction in having a positive effect on the lives of others, is another great characteristic of the United States. I consider myself very fortunate to be a citizen of the United States.

Immigrants are optimists at heart. War refugees -- the subset to which I belong -- are even more so. We believe that we can change our circumstances and change them for the better. I'm a writer, so allow me to tell you a story: In 1995, I'm twenty-seven years old, a newly minted attorney with degrees from Yale and Columbia, and I'm standing in the library of a Manhattan law firm with a breathtaking wraparound view, which includes Ellis Island and the Statue of Liberty. Tears are rolling down my face because being a litigator was already pure misery for me.

"My parents did not risk our lives to leave Vietnam so that I could cry in air conditioning in the U.S.," was my exact thought. Epiphanies come in many forms, and that was mine. Liberty and I had a heart-to-heart that day, and I began to systematically unravel the financial stability of my new profession and trade it in for a creative life. I've written two novels, The Book of Salt (Houghton Mifflin 2003) and Bitter in the Mouth (Random House 2010). They have gone into the world and won many awards and have been read by enough people so that I'm now described as a "bestselling author." More importantly, they have allowed me a voice within an American literary tradition that is so vibrant because it welcomes the new.

Most importantly, my parents understood my decision. I, like them, became a naturalized U.S. citizen in 1980 in Dayton, Ohio, but I contend that I became an American when I looked around me and saw here the promise of more.

To write your story, go to http://greatimmigrants.carnegie.org/.
The conversation continues on Twitter with the hashtag #Greatimmigrants. 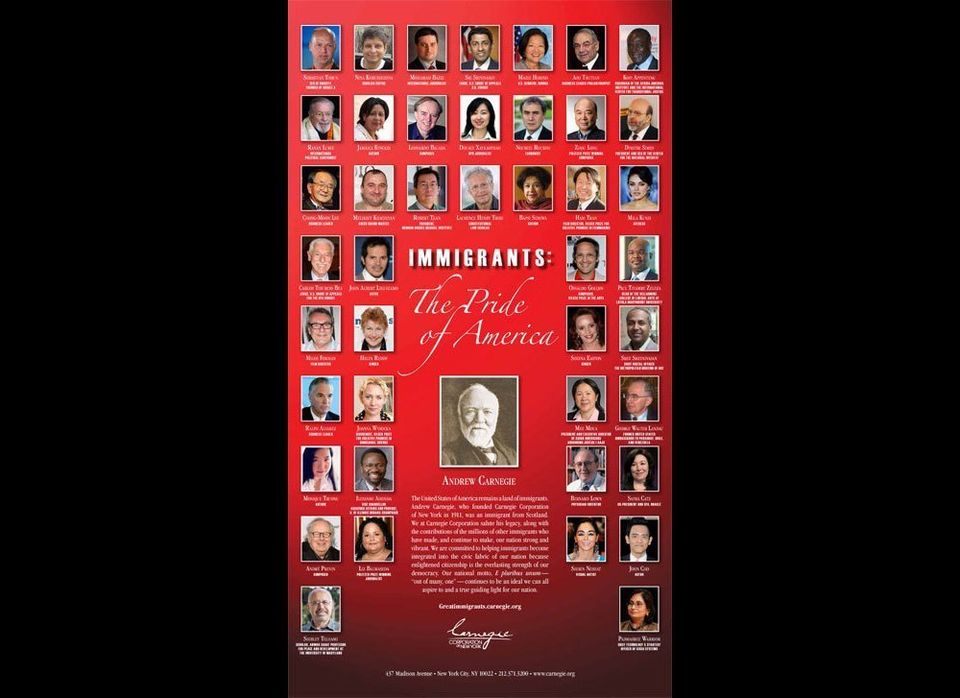 1 / 4
Immigrants: The Pride of America
Since 2006, Carnegie Corporation of New York has celebrated the contributions of immigrants with a public-service ad ─<a href="http://greatimmigrants.carnegie.org" target="_hplink">Immigrants: The Pride of America</a> ─ in <em>The New York Times</em>, featuring outstanding naturalized citizens from all over the world. Here are three wonderful stories from people featured in this year’s campaign. We invite you to share your own stories about how you or your family came to America <a href="http://greatimmigrants.carnegie.org" target="_hplink">on our website</a>.