A student loan company responded Thursday to a leaked email infographic that seemed to suggest that that the only way to not be sad and default on student debt was to follow the company on social media.

The infographic was delivered via email from Great Lakes in April, and then passed along to the Consumerist blog this week. Above The Law also reported on the confusing email in April. The image shows a shadow-figure of a woman with a thumbs up, who does follow Great Lakes on Twitter, under the header "Connect For Success." Next to her is a mopey character, who doesn't follow Great Lakes on Twitter, under the title "Disconnect And Default."

Brett Lindquist, chief marketing and sales officer for Great Lakes, admitted some borrowers told the company they felt the email implied they would default on their loans if they didn't "like" the company on Facebook.

"That was certainly not our intention," Lindquist told The Huffington Post in an email. "We have been responding to people on an individual basis to clarify our intent. Further, we are no longer sending this email to our customers."

Lindquist insisted the email was an effort to suggest borrowers who engage with the company -- through social media, email or otherwise -- are more likely to successfully manage their student debt.

Check out the infographic for yourself: 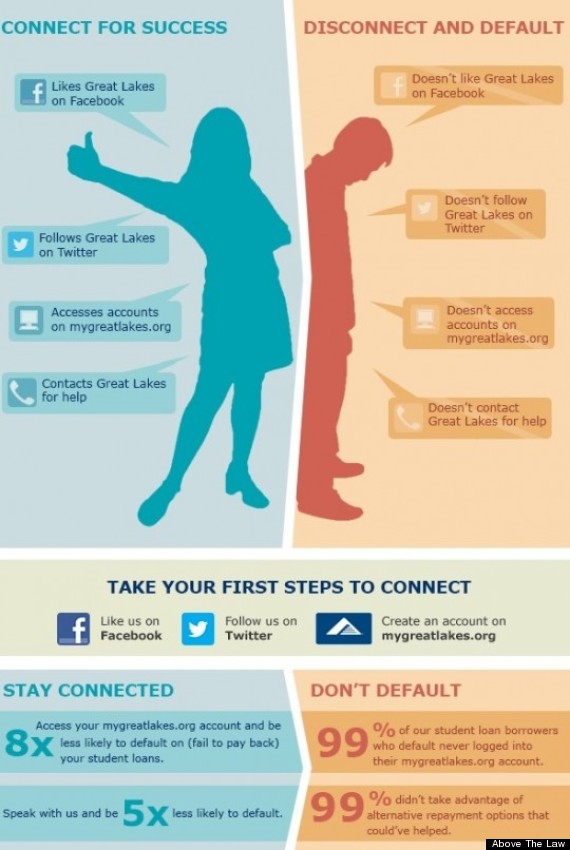