There's a must see on Times Square these next few days! For free. 120 times a day until August 3rd. Tourist or local, it is very difficult to miss it, if you happen to pass through Times Square in New York. 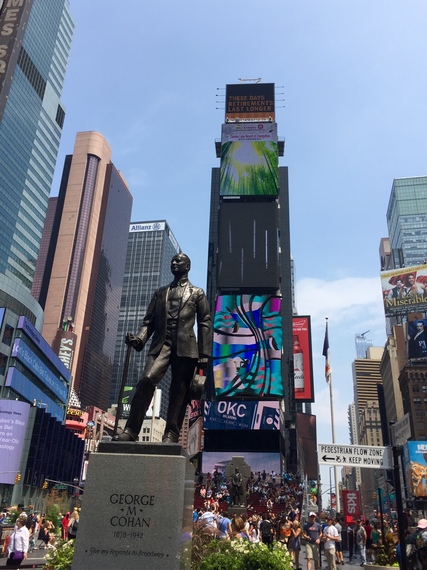 Every 10 minutes or so a video is broadcast to promote "China's historical role and standing in the South China Sea" on the Chinese state news agency Xinhua's mega screen at the Northern end of the Times Square at the intersection between 47th St., 7th Avenue and Broadway, and visible from afar. The screen normally shows commercial videos of scenic spots in China or the excellence of Chinese political and economic initiatives like the mega infrastructure plan to connect half the world in One Road, One Belt - all part of a China's massive plan to control the new narrative of the Middle Kingdom, both domestically and abroad. According to the state-run China Daily the video "showcases the beauty of South China Sea and the Nanhai Zhudao (South China Sea Islands)" and "details the history of the region and stresses that China is the first to have discovered, named, explored and exploited the islands and relevant waters." China's version of history, that is. 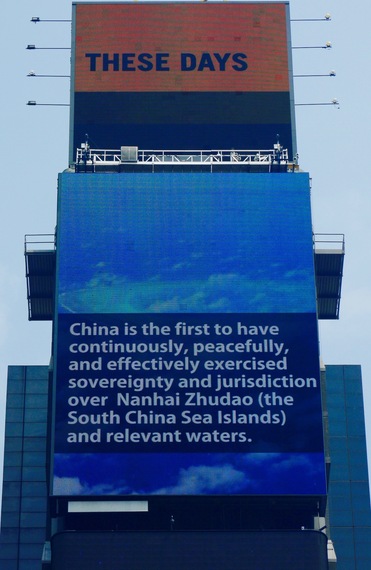 Surprise! China is angry and upset by The Permanent Court of Arbitration in The Hague's ruling a few weeks back; the court found neither legal base nor "evidence that China has historically exercised exclusive control over the waters or their resources."

China has divulged its fury in diplomatic circles, at press conferences and to anyone else who cares to listen. And while the world anticipates China's reaction with some worry, the Chinese propaganda machine has produced the video with the Chinese version in an attempt to win the hearts and minds of "ordinary" world citizens (whomever might fit that description) - or at least the 1.6 million people that pass through Times Square every day. 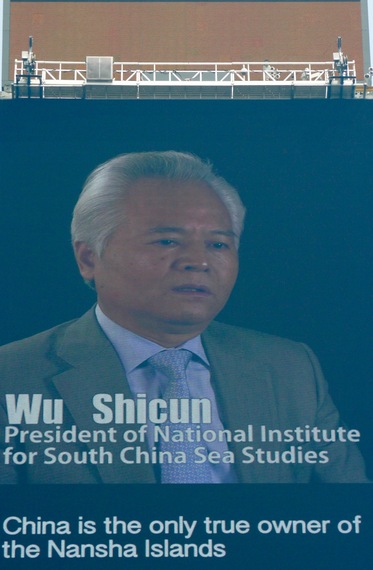 It is interesting that China seems to seriously believe it can influence international perception through a flat screen in New York. Or perhaps it's for domestic consumption, to be able to point out at home that China thus influences public opinion in America.

Anyway, several countries lay claim to the disputed islands in the South China Sea, which is believed to be rich in resources and is busy with maritime traffic. The Philippines brought the dispute to The Hague, saying that China's claim is in contravention of United Nations Convention on the Law of the Sea (UNCLOS). China refused to take part in the process, deeming it outside meddling in internal Chinese affairs, a common way for China to dismiss uncomfortable international attention.

The court rejected China's claims to the disputed islands in no uncertain terms, and thus granted the plaintiff a considerable victory. The court has no sanctions to force China to accept the ruling. Many territorial disputes have been solved in The Hague, and other countries respect and abide by the Permanent Court of Arbitration's decisions.

The court also ruled that China has caused considerable environmental harm to the area through construction of entire islands as well settlements to back her demands, and both China's navy and air force maintain a presence in the area. The day of the ruling really wasn't a good day for China, which has decided to ignore it and calls the court all sorts of names.

The propaganda video has breathtaking shots of the disputed area, accompanied by texts intended to back China's claims. The beginning is quite low key. Next a Chinese official tells us that, "China is the true owner" of the islands. Then China angrily rejects the court and its decision and insists on following the "dual-track approach." This approach is China's most favoured model of international negotiation, dealing with countries bilaterally, rather than negotiating with organisations that represent several countries, like the EU, and in this case ASEAN, of which most of the countries that lay claim to all or parts of the disputed islands are member. China prefers to handle countries individually and quite masters the art of sowing discord.

Over the last seven years China has invested billions of dollars in trying to create and control her own narrative, domestically and internationally. China Central Television (CCTV) produces international news and other programming, which is meant to challenge and even replace BBC World, CNN, al-Jazeera, and other respected international media outlets, but as foreign viewers will know CCTV is not quite there, and hardly the channel you tune in to to be informed on international affairs.

At home China's Communist Party exercises strict media control and harsh censorship. No doubt, the Chinese have more freedom - and outlets - to express themselves than ever before, but that certainly doesn't mean that they actually enjoy freedom of expression. Way before the Communists came to power in 1949, the Great Helmsman Mao Zedong decreed that Chinese media must serve the Party and their duty is to educate - not inform - the masses.

Also to this end, over the last 8-10 years, spectacular and very modern museums have sprung up all over China to replace the mouldy old revolutionary history museums, whose most revered exhibits were the respected and much loved leader and revolutionary Zhou Enlai's equipment from The Long March; his rush shoes, his small spade and his flask. I have personally seen several sets of this, much more than even Zhou Enlai could have worn to pieces during The Long March. But at that time China was very poor, and until 1992, the Chinese didn't enjoy freedom of movement within their own vast country, so the chances of their actually seeing the same exhibit in more than one local museum were quite slim.

Now the new fabulous museums tell the expertly exhibited and carefully narrated version of China's history that the leaders want to promote, may it be showing the wonderful dinosaur skeletons from the Gobi Desert as proof that mankind originates in China rather than Africa, unlikely pieces of cloth to prove that Kashgar West of the Taklamakan Desert has always been Chinese. Or - as is the case in the newly renovated history museum in Beijing - simply ignoring important, uncomfortable and devastating political facts in Chinese history, e.g. The Great leap Forward that caused the death of tens of millions of Chinese from starvation in the late 1950es, the disastrous Cultural Revolution, 1966-1976, at one point well nigh a war between fractions in the armed forces, with millions of youth forced into internal exile, massive torture, forced suicide, death and destruction, and most recently the brutal crushing of the uprising for democracy in Beijing in 1989.

These hugely important, disastrous and defining events in recent Chinese history are simply and very resolutely consigned to oblivion as part of the new Great Narrative of China.

added on Aug. 31st: you might find this article in the Guardian interesting as well