What do writers have to tell us about being dads? Not much, I used to think.

In my youth, I imagined all male American writers as solitary, itinerant intellectuals, often drunk. Hell, Jack Kerouac played so loose and fast he didn't even commit to his work long enough to revise it (or so he claimed), let alone settle down with any one woman to raise a kid! I swallowed this stereotype without a hint of irony or awareness that the authors I admired for championing it might be spinning self-aggrandizing fictions, exaggerating and romanticizing a lifestyle that must in fact have been lonely and difficult.

While there's a lot to bemoan about our increasingly diminished privacy in the age of social media and reality television, one positive outcome is that it's now much clearer to see what it means to be a working writer, many of whom have stable lives and families to help support. These writers are still on the edge of culture, it's just that the edge looks very different then it once did. Today, iconoclasm means maintaining human connections in the pixelated desert of digital interactions; and building relationships wherein all parties, regardless of race and gender and sexuality, are recognized as equal; and trying to be fully present and emotionally engaged in both your personal life and your career.

We continue to turn to the many great writers in our country for news of not just how it's been or how it is but of how it could and should be, and they don't disappoint. They're still dreaming big and deep, and shaping those dreams into gripping tales told in language put so perfectly to the page it catches in your throat. So I wondered, what would contemporary writers have to say on the topic of fatherhood? I found 22 amazing wordsmiths who contributed true tales of what it's like to be a dad, which I collected in the book When I First Held You: 22 Critically Writers Talk About the Triumphs, Challenges, and Transformative Experience of Fatherhood. 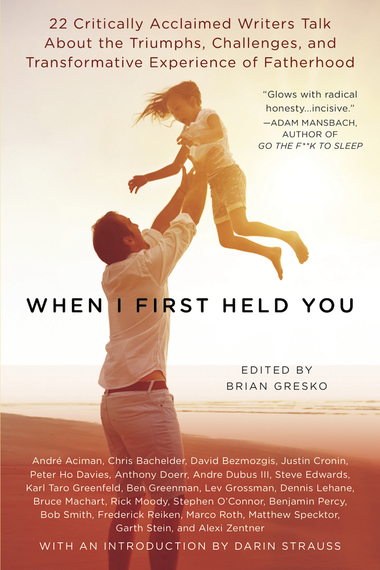 Taken together, a picture emerges of extreme contrast. Fatherhood is a time-based experience, one in which it's difficult if not impossible to pause and evaluate how you're doing. In other words, forget "father knows best!" No: fathers get by, they do what they have to to survive. "I almost always feel like a failure as a father," Rick Moody writes, a sentiment echoed in several essays.

Especially in an age when gender expectations are fluid and shifting, there is no easy, clear checklist that a man can follow in order to answer the question "What is being a good father?" As Ben Greenman puts it, fatherhood is "...returning to that question repeatedly, asking it again and again, each time failing to acquire any additional insight. In that sense, being a father is being a question."

This unsteady state shifts a man's view of himself so fundamentally, it can be hard to remember what life was like before kids. What did I used to do on Saturdays, besides sleep in? "Your life is not your own once you have a child," writes Stephen O'Connor. "Long accustomed freedoms become mere memories."

The world, perhaps once largely a source of curiosity and pleasure, becomes a threatening place. I used to think that I could handle whatever came my way, but where my son is concerned there's a hard, protective knot inside of me, a tight desire to shield him from what I can. As Benjamin Percy writes, "Becoming a parent fundamentally changed my vision. I cannot help but see the world in sharp angles. I walk into a room and itemize the woodstove, the electrical socket, the scissors, the open window, the bottle of bleach -- whatever can hurt. Everything is a hazard."

This new world is a lonely one, because those fears and worries can be difficult to share with others, especially as a man who shouldn't be frightened of anything, it seems. On top of that, there's the added loneliness that can come when you're doing things for your child's sake and not your own -- the playdates and school events and the like. "Am I alone in not so much loving the accoutrements of parenting, the competition and the solitude and the strangeness of the accidental socializing?" Matthew Specktor asks. "Grateful as I am for all the parents with whom I feel an affinity... I am so often alienated when I am with people whose only connection to me is the fact that our kids appear to be enjoying one another's company."

The transition "and yet" comes up in several essays, because for all the fear, loneliness, and doubt of fatherhood, there is the amazing, some would say miraculous side of the equation, the part that's less a question and more an answer. I'm referring, in Frederick Reiken words, to that "...force that pulls with quiet, steady gravity. A single force that doesn't go away, no matter where I am or what I'm doing. It seems primordial. I suspect that it has something to do with love. Or that it is, precisely, love."

As Dennis Lehane puts it, no other experience will affect you as profoundly as watching your kids make their way through the world. Watching his older daughter tells his youngest one a story causes him to feel "...a pride I never felt in association with my own meager accomplishments. I never knew a pride like that existed actually. I never knew love could quite feel this way. And that's worth no longer being cool, no longer being competent, and no longer having peace of mind ever again."

Or take it from Garth Stein: "It is my job to facilitate the achievement of my sons' dreams. It is my job to do so selflessly and without prejudice. It is my job to catch my sons when they fall, but to remain as inconspicuous as possible until they do. It is my job to pick them up and dust them off and send them on their various ways, and to expect nothing in return. Not a thing. For only in the giving of oneself completely and without condition will one find joy."

"We were simply given them to love and to guide and to set free," Andre Dubus III tells us. Our children take us down paths we would have never traveled, exposing our worst qualities and inspiring our best, and then they're off, all grown up on their own.

It was silly of me to once think that writers and novelists had nothing to say on the topic of fatherhood. Comedian and writer Bob Smith puts it perfectly when he writes "The true marvel of children and novels is that they allow us to imagine someone else's hardships." They build our empathy and compassion, stress our hearts, feed our souls, and bring tears of joy and pain to our eyes. As both writers and parents, we feel like we can't do enough or get it just right in the way that we want, and yet we always try to do better. It's my hope that When I First Held You provides parents and parents-to-be some comfort in the day-to-day challenges of life, especially life with kids, and helps them stop and notice more fully -- amid the exhaustion, sacrifices, worries, and loneliness -- the wonder and beautiful humanity of parenthood.

More:
Parenting Parentsfatherhoodstay at home dadsbooks
Newsletter Sign Up
Raise the kind of person you'd like to know
Subscribe to our parenting newsletter.
Successfully Subscribed!
Realness delivered to your inbox

Writer, Editor of WHEN I FIRST HELD YOU