The Great Recession ended in 2009, but Americans across the country are still grappling with its fallout.

Nearly 40 percent of America’s unemployed have been jobless for 27 weeks or more, according to a new report from the non-partisan Brookings Institution. The share of jobless who are long-term unemployed hit its peak at the end of the Great Recession, but still remains historically high, as the Brookings chart below indicates: 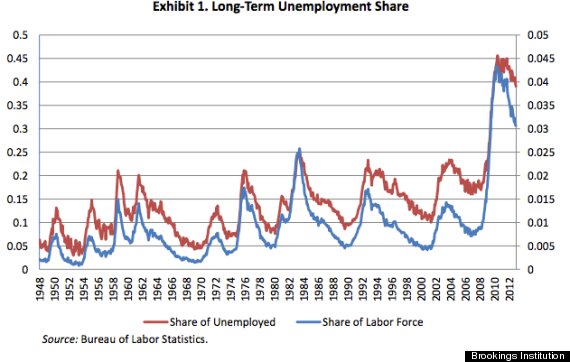 As the chart shows, the number of long-term unemployed as a share of the unemployed -- and labor force overall -- was higher during the Great Recession and the period immediately following it than at any point since the end of World War II.

The 4.7 million Americans still struggling with long-term joblessness could face the threat of a lifetime drop in wages and poorer health for their children, according to Brookings. Being out of work for 9 months or more also can decrease interview requests by up to 20 percent for those applying to low- or medium-skilled jobs, according to a recent study.

And by causing a large-scale decay of skills in the workforce, the high levels of long-term unemployment could be bad news for the economy as well, according to economists cited by the International Business Times.