The U.S. Southwest typically evokes images of endless deserts, without a drop of water in sight. But about 14,000 years ago, the Southwest was home to many large lakes, such as Lake Bonneville, which covered much of present-day Utah and was nearly as large as Lake Michigan. Over the years, Bonneville evaporated, leaving behind today's Great Salt Lake, and other smaller bodies of water.

Just how those huge original lakes got there, though, has been a long-unanswered question.

One leading theory: Enormous ice sheets that once covered much of North America split the jet stream that runs eastward across the northern United States and Canada and redirected storms and rainfall southward over the western states.

But that hypothesis is wrong, according to a study published Sept. 27 in the journal Science.

Rain from the south

Were that hypothesis correct, there would have been heavy rainfall between the coast and the lakes, dropped there by weather systems moving east, the authors of the new study reasoned. To reconstruct ancient levels of rainfall in the area, the scientists looked at levels of old lakes, and analyzed the type of pollen found in sediment cores in the ocean. Rainfall affects the type of plants that grow in an area and how much pollen they produce — pollen that is blown out over the ocean and settles on the seafloor.

Their analysis found that the area was quite dry indeed, suggesting that the altered jet stream wasn't the source of the lakes. [50 Amazing Facts About Earth]

Instead, researchers think that large storms from the tropics came north, dropping large amounts of rain to form these ancient lakes, said Mitch Lyle, study author and Texas A&M researcher. Researchers think this is the likely explanation, due to evidence of heavy rainfall to the south of ancient Lake Bonneville, in an area stretching between present-day Utah and the Baja peninsula. 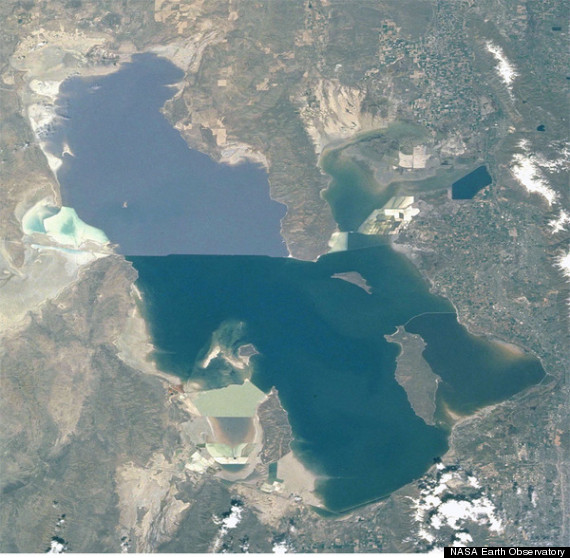 The Great Salt Lake. This photograph was taken by an astronaut aboard the International Space Station in the summer of 2001.

Past and future climate

The study affects the way scientists think about North America's ancient climate, and, indirectly, what may happen in the future, in our warming world. Climate change can have very specific local effects, and change what areas receive rain, and when, he said.

"It has been assumed that all the great basin lakes operated in unison, i.e., that the whole West got more precipitation at the same instant," Lyle told OurAmazingPlanet. "But our data show that large-scale patterns developed and changed over thousand-year time frames."

In this case, tropical rains formed huge lakes that served as home to ancient inhabitants of North America. For example, some of the oldest known human remains in North America have been found near Paisley Cave in present-day southeastern Oregon, on the banks of an ancient lake, Lyle said.