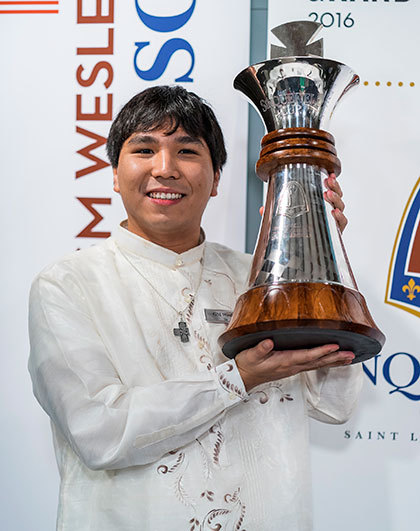 "I am living a dream," exclaimed Wesley So after winning the 2016 Sinquefield Cup, the strongest chess tournament of his life and one of this year's best. With this victory he took the lead in the Grand Chess Tour, a series of four Grand Prix tournaments.

Born in the Philippines, where his talent was compared to that of Bobby Fischer, So moved to the United States a few years ago and will represent his adopted country at the Chess Olympiad in Baku in September for the first time.

So, 22, has won strong tournaments before, but his victory last Sunday at the Chess Club and Scholastic Center of Saint Louis was special. Only two grandmasters from the absolute top, the world champion Magnus Carlsen and the former world champion Vladimir Kramnik, were missing. Last year he was the wild card in the Sinquefield Cup and finished last; he sure turned things around this year.

So finished undefeated. A pack of his rivals followed him closely and he had to wait for the final outcome of the game between the former world champion Veselin Topalov and Armenia's leading grandmaster Levon Aronian. It was an emotional battle lasting 81 moves.

At one point the former world champion Garry Kasparov joined the commentating team and explained how Topalov could have played better and what all he missed. Despite these inaccuracies, the Bulgarian grandmaster was still winning, but he struggled to close the deal.

Around that time the great Jamaican sprinter Usain Bolt was explaining to NBC's Bob Costas why he wants to win three gold medals at the Olympic Games in Rio before he retires. This golden trifecta - 100m, 200m and 4x100m - would be his third in the last three Olympic games. If he failed just once, people would say: "Yes, you are great, but you didn't close it well."

Kasparov knows the feeling. He retired from his illustrious professional career in Linares, Spain, in 2005, just one month shy of his 42nd birthday, losing his last game to Topalov. It was painful, but in Saint Louis Kasparov gave Topalov credit: "He always fights." Later in the evening Topalov squandered his advantage and drew against Aronian. Bolt won the first race in Rio and So won in Saint Louis. A memorable day. 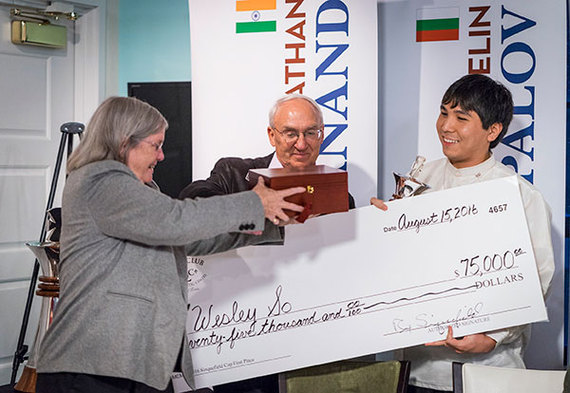 Wesley So received the first prize of US $75,000 from Jeanne and Rex Sinquefield. Around 2007 the Sinquefields decided to support chess and professional players began to flock to Missouri in search of employment. High level U.S. championships and strong international tournaments were organized there and Saint Louis officially became the U.S. Chess Capital. 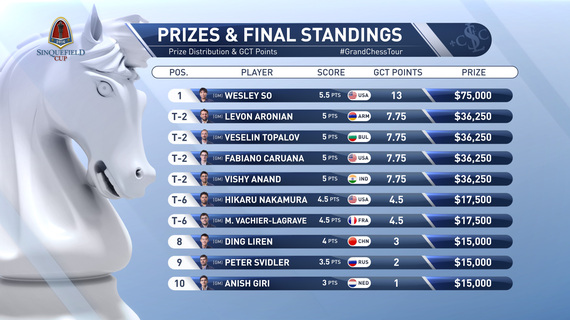 Four grandmasters shared the second place. The oldest participants, Vishy Anand, 46, and Topalov, 41, could still play with the boys. Aronian, 33, is almost always around the leaders. The current U.S. champion Fabiano Caruana had another solid result before going to Baku.

Tournament victories can sometimes take shape already in the first round. So gained confidence after he defeated Hikaru Nakamura. In a sharp Catalan opening Hikaru tried to unbalance the game with an exchange sacrifice, but So just needed one tiny inaccuracy to score his first win. 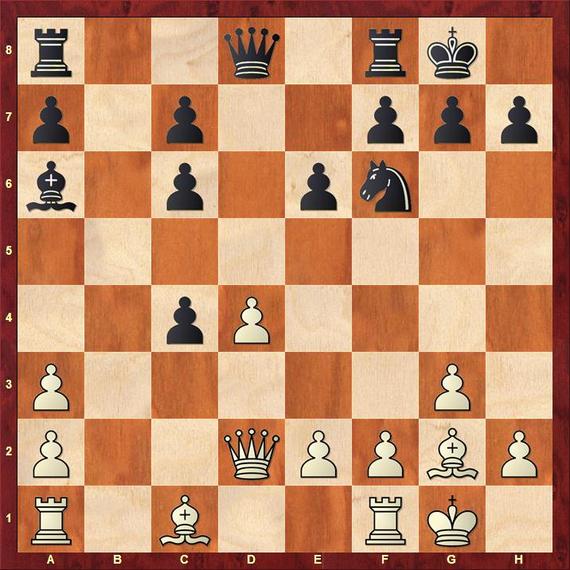 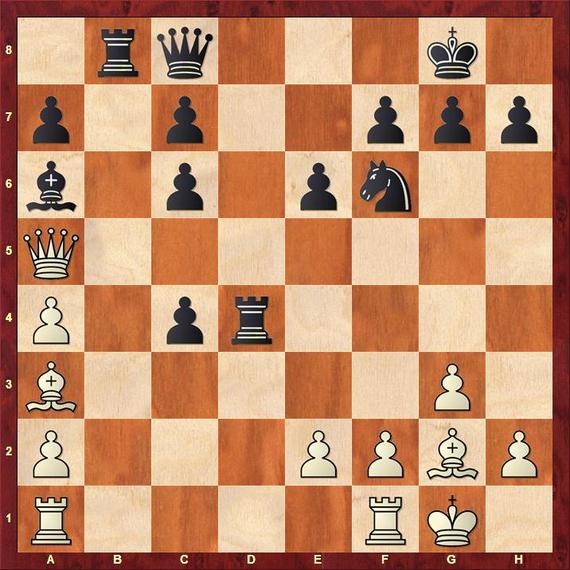 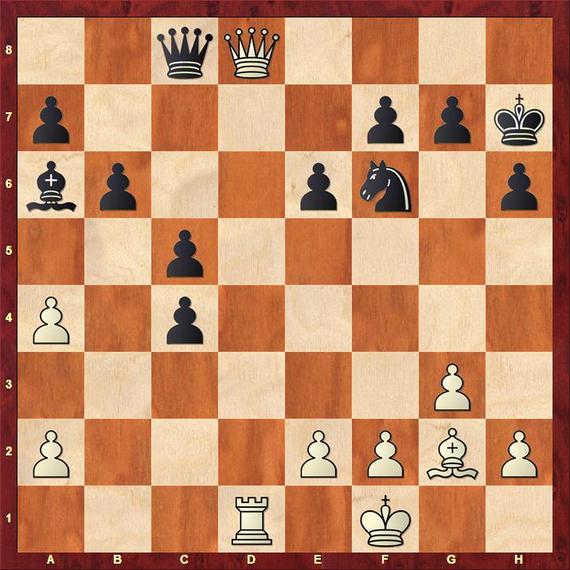 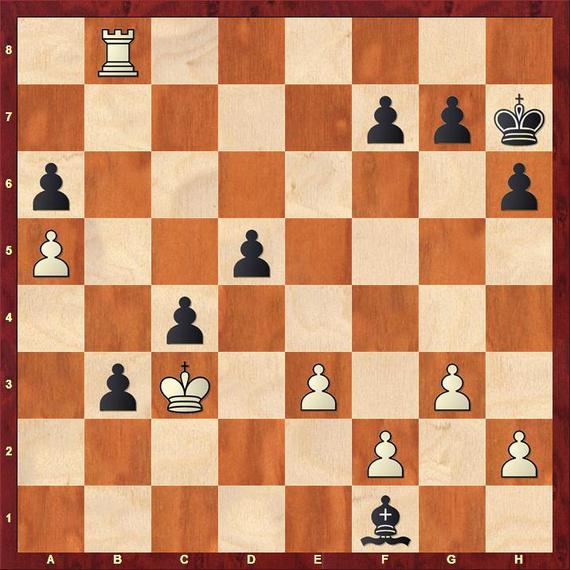 The game had a big impact on the overall Grand Chess Tour standings.
So leads by a huge margin with 30 points. Only Nakamura can catch him if he wins in London in December and So does not finish among the top three winners. This would give Hikaru 30.5 points. 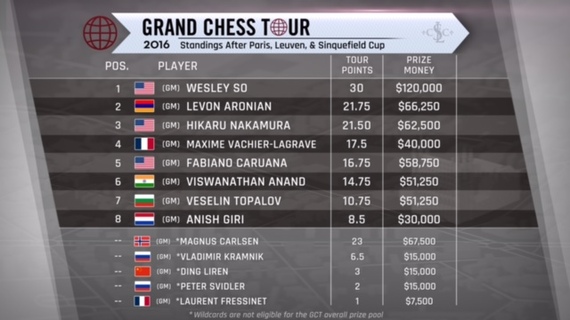 This official table gives mistakenly Vladimir Kramnik as a wild card. He didn't play in Saint Louis because of health reasons, but he can play his third tournament in London and be eligible for the overall GCT prize. Only three best events count.

In fairness, the competition should be over by now. Magnus Carlsen played as a wild card and his results, including his victory in Leuven, should not have counted in the overall GCT standing. In that case, So would get three extra points and nobody could catch him.

Nakamura eventually salvaged the tournament with the best game of the event against the Chinese grandmaster Ding Liren. It featured multiple sacrifices in the sharp Botvinnik system. 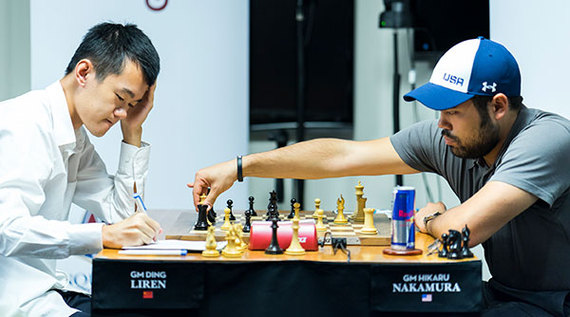 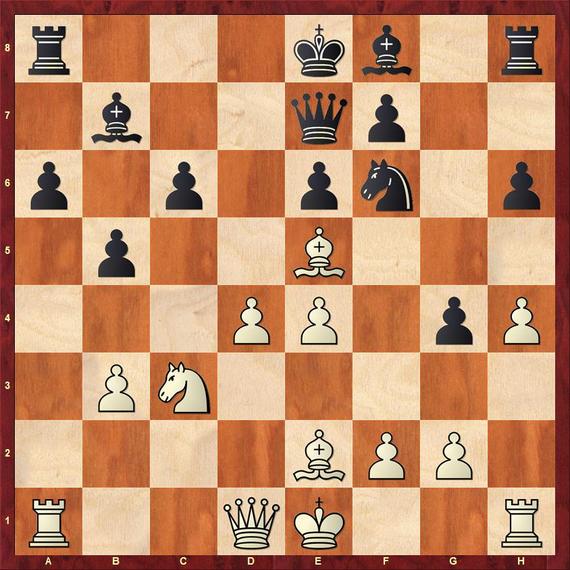 A novelty that would fit nicely in Mark Dvoretsky's book Maneuvering-The Art of Piece Play. Hikaru decides that the best square for the Queen is on e3 and prepares to go there while his h-pawn is still protected by the rook.
The idea has an additional twist.
16...Rg8
Nakamura was expecting 16...Bg7 17.0-0 0-0 with equality.
17.0-0 Nh5?!
Attacking the h-pawn, but this idea is risky because of Nakamura's brilliant retort. He thought that the knight would have to move somewhere anyway. After 17...Nd7 18.Bg3 h5 White can shake it up in the center with 19.d5.
18.d5!! 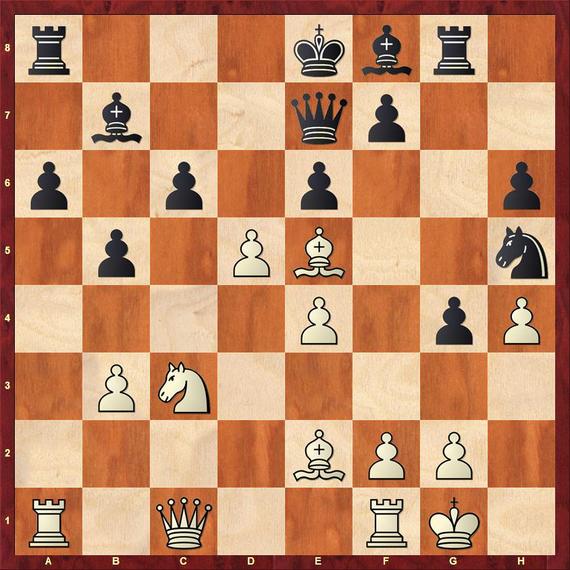 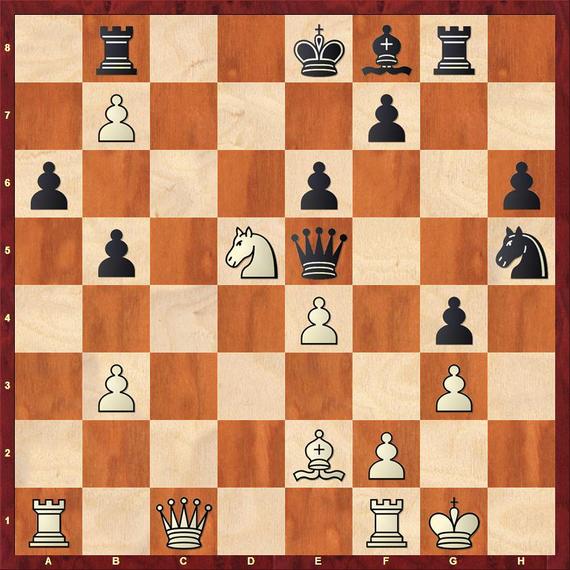 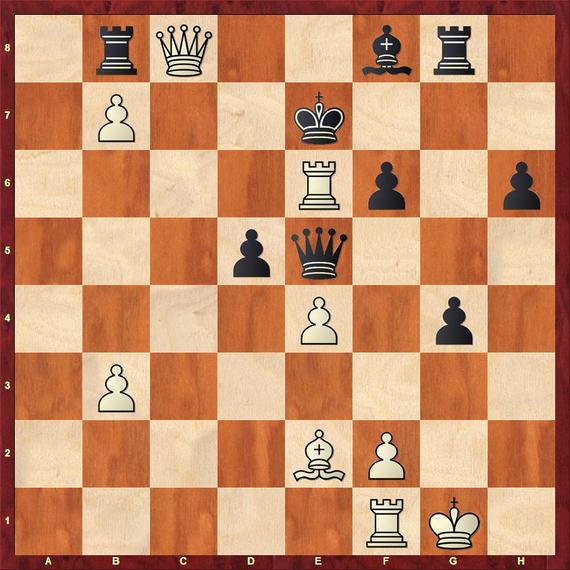 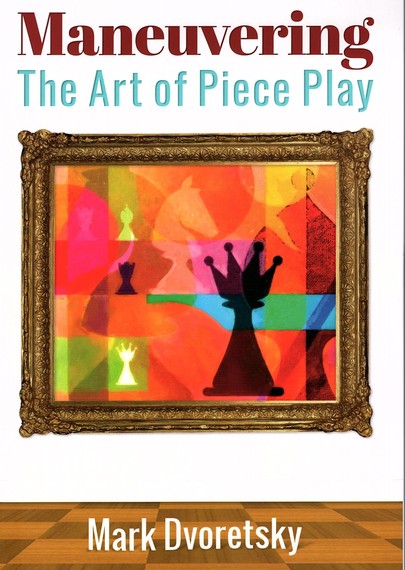 Mark Dvoretsky's book Maneuvering - The Art of Piece Play, published by Russell Enterprises, covers a difficult subject. The author discusses how to improve your pieces in different setups and gives wonderful examples, mostly from the games of strong grandmasters. The quizzes are demanding, but there is no need to solve them. Just read the solutions and enjoy the book.

The geometrical gem, involving four corners, comes from the game of Ulf Andersson, one of the world's best grandmasters of the 1980s. 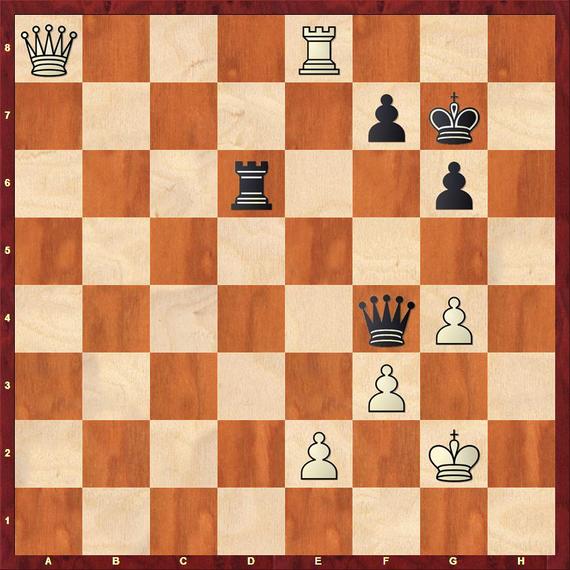 The U.S. champion Fabiano Caruana will lead the U.S. Olympiad team in Baku, followed by Nakamura, So, Samuel Shankland and Ray Robson. The top three are rated among the world's top seven players. The team will have decent chances to finish first. The last time the U.S. team won gold medals was 40 years ago. 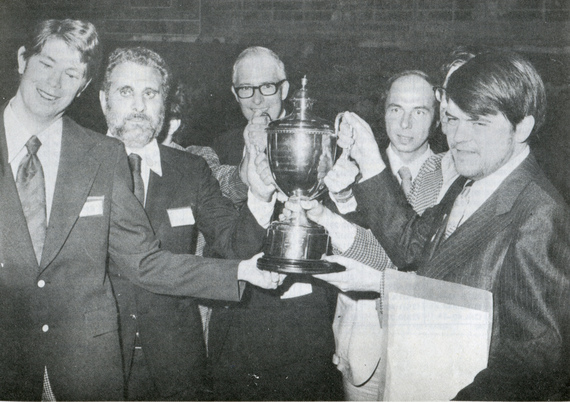