ATHENS -- National Bank of Greece, Formionos street branch, around 1:30 in the afternoon. Nearly 25 people are in line waiting their turn at the ATM. Some are worried that the machine will run out of money and want to reach it before that happens. People offer financial analysis to strangers. Comments are interspersed with personal experiences, socio-political criticism, patriotic and European ideals.

A gentleman next to me looks calmer than the average person in line. I ask him for an anonymous comment.

"I was supposed to come either way," he says. "Every week on this day I come here to withdraw my mother's pension because she's not familiar with ATMs."

"So, you are not withdrawing money out of fear?" I ask him.

"No, I'm not afraid of anything. And of all versions available, I prefer the one with the referendum and 'no.'" 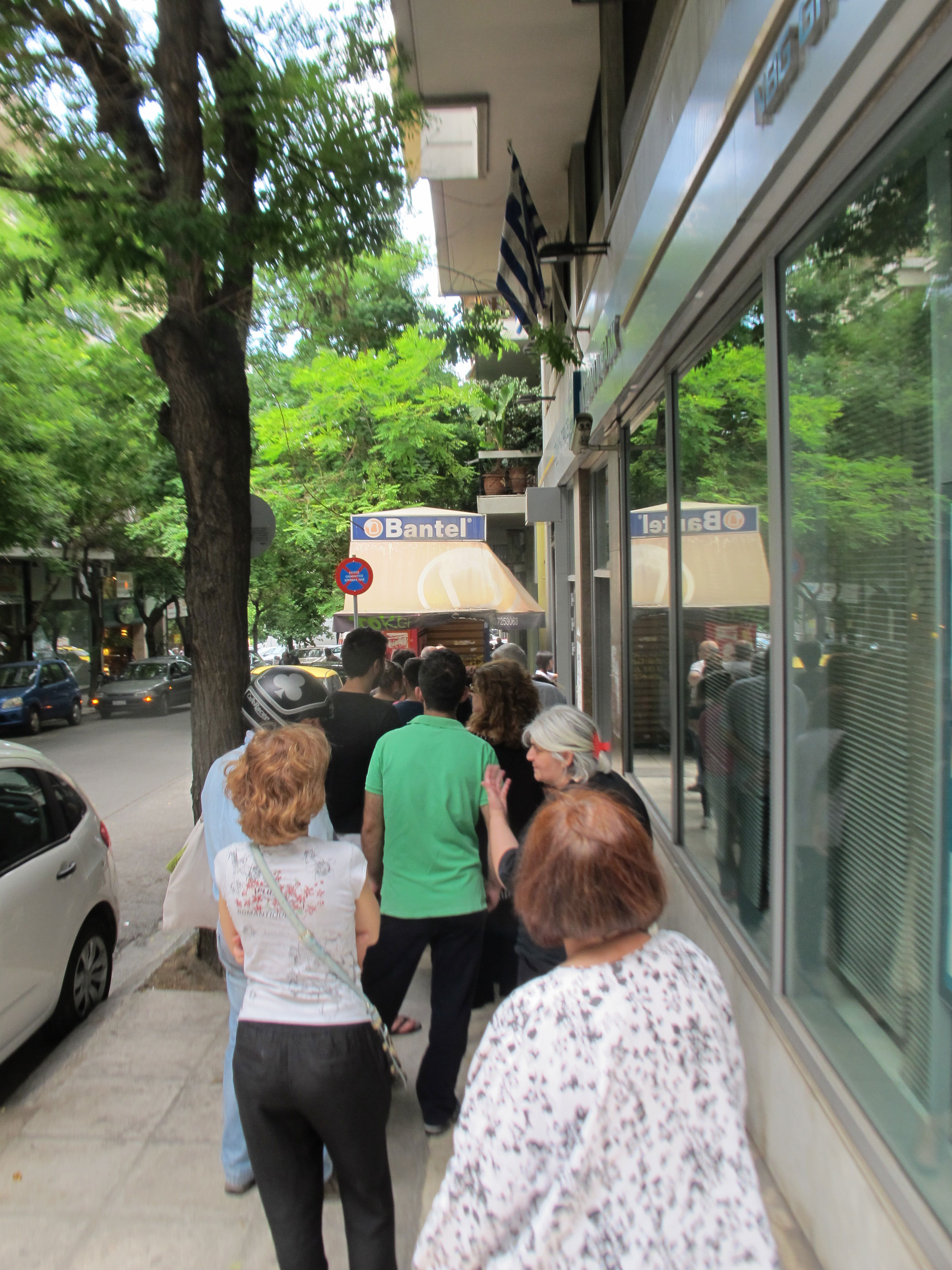 A lady comments on the position of the Greek government and its leader, Prime Minister Alexis Tsipras, who has called a referendum for next Sunday on a bailout proposed by the country's international creditors. "Tsipras will win," she says. "Both at the referendum and the elections, whenever they will be."

I ask her if she, too, is withdrawing money driven by the uncertainty of developments. Her response is negative, with a keen nod of disapproval.

I wonder if this accumulation of customers might be random, though unusual. On the other hand, why should it be considered morally reprehensible or hypocritical if a person is anxious about their savings and tries to protect them, whatever his or her political view?

At the Eftichidou street branch, where most of the people are not interested in speaking with a journalist, one middle-aged man agrees to talk to me.

"Europeans are trying to terrorize us. I was living in Germany, they are advanced, I give them that, but now they just want to subjugate us. Schäuble does not accept an honest, democratic agreement," he says, referring to German finance minister Wolfgang Schäuble. "He is so zealous against us, I think, that his plan is to overturn the first left-wing government, the left wing is their enemy," he adds.

A lady next to him, who was listening to the conversation, suddenly bursts out: "They don't want to see Tsipras and Kamenos. Because they don't do whatever they tell them."

The man continues: "Let them kick us out. The European south, Italy, Spain, they will follow. Let us form a union with them. Greece has a lot of advantages: geopolitical, agricultural, in tourism, in shipping. In the prospect of the drachma, the first couple of years will be difficult. After that we will recover. And Europeans will want to take us back. We had the drachma before and everything was all right."

"He's very optimistic, that one," I hear two girls whispering.

Across the street, under a shadow, a group of DIAS motorcycle police is watching the queue. "We have orders to supervise ATMs and supermarkets," they tell me.

At the Piraeus Bank branch at Pangrati Square there is no line; across the street, the Eurobank ATM must be serving tens of people. A young man, around 30, angrily addresses the few clients of Piraeus Bank: "Withdraw everything and next Sunday vote for 'no.'"

No one replies. He laughs to himself.

"I would have withdrawn money today, anyway," he tells me. "Now I will withdraw more to be safe for the next few days. I am certain that ATMs will run out of money -- it has already happened at some places."

"What do you think about the decision to have a referendum?" I ask.

"I am completely against the idea. It's a backlash because they do not have the political will to make the necessary decisions. They never had it and that always made our situation worse."

I ask him if he is not contradicting himself.

"To me there is no dilemma. I am a working person, not privileged at all. But our only option is Europe. The motivation of the SYRIZA-ANEL government is the return to the drachma, and right now is the climax of an organized plan with that sole purpose. Some will return their capital to the country and buy us, like notables."

He plans to vote, "no matter the proposed agreement," he says.

Two young women walk away. They did not withdraw any money.

"I voted for Syriza, without being their follower before, hoping for better terms after the negotiations and reinstatement of a minimum wage," one says. "They did not negotiate anything all these past months, that's what I feel. They could have lowered those pensions that are still high and remained tenacious for the social solidarity benefit for pensioners. But I cannot stand them pretending to negotiate hard. And now, five months later, they throw the ball in our court, to decide on a financial issue without knowing all the evidence. Which exactly is the agreement?"

"Yes. I am scared of bankruptcy, of the ruthless devaluation of currency and the general isolation of the country once it exits the EU."

She is an accountant, like her friend, who adds: "In 1974, my mother emptied the supermarkets." That was the year Greece went from a military government to a democracy. "They didn't need anything. Nothing will happen now either."